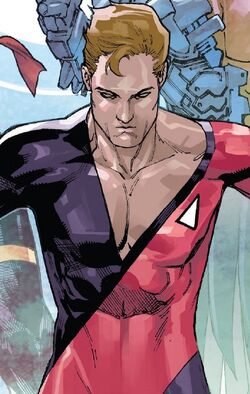 Empath was the son of an impoverished noble Castilian who could trace their lineage back to the ancient Romans. Hailing from Spain, Manuel de la Rocha was a mutant who attended school at the Massachusetts Academy, where he was one of the original students of then villain, the White Queen. Frost's students, who were known as the Hellions, were rivals of Charles Xavier's students, the New Mutants.[2]

During his tenure with the Hellions, de la Rocha met and fell in love with the New Mutant known as Magma. Amara eventually left her team and became a member of the Hellions, so that she could be close to Manuel.[3]

Manuel accompanied Amara on a trip back to her home in Nova Roma. During the flight there was a bad storm and the plane crashed in a swamp. Amara and Empath found themselves being drawn closer together during their trek through the wilderness, without Empath even having to use his powers. Amara was wounded while saving Empath from a jaguar. He soon realized that Amara hoped that they would not be found by her father, because of the marriage plans her father had in store for her. Empath, knowing her wound was getting infected, used his powers to upset her so that she caused an earth tremor and raised a small volcano. A few days later, they were found by her father, who had located them due to her earth tremors.[4]

Soon after, while Amara and Empath were still in Nova Roma, Amara was captured by agents of the criminal geneticist known as the High Evolutionary. The agents teleported them to a secret base, planning to remove Amara's powers permanently. The New Mutants teleported to the base before Magneto and the others, hoping to rescue Amara and Empath themselves. They arrived in time to rescue Amara before her powers were taken from her, and they then defeated the High Evolutionary's agents.[5]

The people of Nova Roma came to believe they were not descendants of ancient Rome, but brainwashed kidnap victims of Selene. Empath used his powers to force Amara and the others to continue believing they were Nova Romans, until Firestar, Cannonball, and Warpath visited, shattering his illusion.[6]

Later, Empath joined X-Corporation, where he became the Communications Director for the Corporation's Los Angeles chapter. While there, he had problems with the drug Kick, which could take over a person's mind. After M-Day, all X-Corporation offices were closed down after many attacks. Empath was quickly reassigned to help out at the Mansion as he still retained his powers, but was first assigned by Emma Frost to pick up Magma who had lost her mind after losing her boyfriend.[7]

Amara found it difficult living with Empath, often blaming him for various things that happened at the mansion. During one of the many attacks after M-Day, Empath left of his own free will sometime before the rest of the 198.[8]

Sometime after that, Empath found himself a mind slave of the Red Queen, taking part in the attack on the X-Men with members of the Hellfire Cult. He was beyond loyal to her and followed her orders blindly. Using his powers, he easily manipulated the X-Men to his whim under Red Queen's orders, but was then taken down by Pixie who stabbed him with her soul sword leaving him blind.[9]

Empath was one of the first prisoners in the new base of the X-Men, still very loyal to the Queen; he even noticed her aura when the Sisterhood attacked the X-Men during the night. Magik noticed that Magma still had feelings for Empath, but liked him better blind as he was helpless this way.

Shortly after Illyana gave Empath back his sight, he was put in the same virtual reality as the rest of the X-Men's prisoners in the X-Brig. This virtual reality was shut down when Selene made her attack upon Utopia. During the attack, Empath fought a temporarily resurrected Harry Leland.[10]

He was later seen living on Krakoa amongst his fellow mutants. After being examined by Professor Xavier after an outburst of emotionally controlling his fellow Krakoans to fight for his pleasure, it was concluded that he intrinsically displayed anti-social and sociopathic troubles due to his mutation. To make sure he was treat and put his mutation to good use, the Quiet Council & Sinister created a group, led by Psylocke (Kwannon), for mutants with troubling mutations, to give back to Krakoa and allow them to let their mutation flourish.[11]

On their first mission, to destroy the State Home for Foundlings, John Greycrow warned him not to use his powers on the team, which Manuel ignored, making fellow teammate Nanny extremely compassionate towards John, to which John responded by shooting Manuel dead between the eyes.[12] He was later resurrected by the Five.[13]

Empathy: Manuel is a powerful empath able to sense, read, and manipulate the state of nearby beings, including their emotional state, intentions, and truthfulness.

Pathokinesis: He can psionically control one emotion at a time, affecting many targets in the same area during that time or controlling the emotional states of multiple victims one at a time. He can change the amount of control he exerts over his victims, such as a simple emotional push or complete emotionless zombies who bow to his every whim.

His interactions with Madelyne Pryor appeared to have altered and enhanced his abilities. His emotion control is much more powerful but requires visual concentration and/or eye-contact. He also uses words to focus his powers. His eyes have always glowed with psionic energy when he uses his powers.

He possesses normal human strength of a man of his age, height, and build who engages in moderate regular exercise.

He is bombarded by the emotions of people around him, and that he must focus on a single, strong emotion to protect himself from being overwhelmed.

Like this? Let us know!
Retrieved from "https://marvel.fandom.com/wiki/Manuel_de_la_Rocha_(Earth-616)?oldid=6075317"
Community content is available under CC-BY-SA unless otherwise noted.