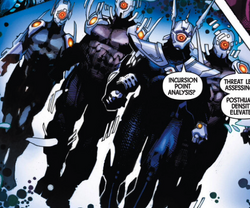 Team Aliases
The Cartographers of the Apocalypse

Base of Operations
Mobile on Earths across the Multiverse
Affiliations

The Mapmakers were created by the Beyonders once Rabum Alal started interfering in their plan to destroy the Multiverse; their mission being to charter worlds where the Molecule Man had died, and mark the movements of Rabum Alal's disciples, the Black Swans. The Beyonders did so by 'implanting' a 'virus program' in interuniversal 'White Space,' which would cause any emergent artificial intelligence that entered it to be reprogrammed to serve their ends.[1]

The Mapmakers travel the Multiverse through the use of the incursions, passing from Earth to Earth, stripping those planets of all usable materials, down to the microbes in the soil and the elements in the core,[2] a process that is stated to take several weeks.[3]

When an Incursion occurs, the Sidera Maris, or Bridge Builders, are sent on the new Earth to hold that incursion zone. The world they come from, which had previously been harvested is a truly "dead world" stripped of all usable material. It has also been intentionally destabilized; around an hour into the incursion a piece of the planet is pulled free and goes crashing into the new Earth. This triggers the destruction of the dead world, and the fragment of that crashing piece serves as a marker for the Mapmakers to return to the surviving Earth.[2]

They then leave a contingent of Sidera Maris on the Earth; waiting for its next incursion, they try and stop others from detonating their Earth before a marker can be set.[3]

The influence of the Mapmakers on Earth-616 was felt for the first time when the incursion point opened on Latveria. While Kristoff Vernard and Victor von Doom handled the incursion, the Illuminati dealt with the Incursing Earth, detonating it before the process could occur. Despite their efforts the smallest fragment came through the zone and was found by Doom.[2] Doom was stymied from further inquiries by the Illuminati members Reed Richards and Stephen Strange.[4]

They invaded the city of Tian on Earth-2319. Arriving in the city, they cataloged this world as an Omega Level threat due to the density of superhumans. The problem was dealt with by destroying the X-Gene carriers.

The Mapmakers attempted an invasion of Earth-4290001. This was not this reality's first time encountering the Mapmakers. Their Sidera Maris were repelled by the Great Society, and their world destroyed, but not before the markers could be planted. Four Mapmakers arrived to take the world, but could not stand against the might of the Great Society, who destroyed all four of them.[5]

Equipment: The Mapmakers possess scanners allowing them to determinate the threat level of the subjects they decide to analyse.[3]

Retrieved from "https://marvel.fandom.com/wiki/Mapmakers_(Multiverse)?oldid=5189641"
Community content is available under CC-BY-SA unless otherwise noted.