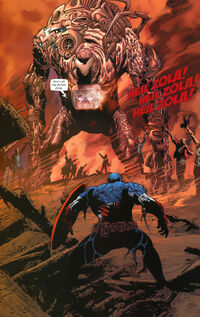 The Marauders are a white supremacist survivalist group that was led by former American corporal Thomas Jenks. Since the founding of the group, the Marauders are treated as a public nuisance by the known public. However, the Marauders took advantage of the chaos in America after the Liberators' invasion by breaking into less defended National Guard outposts, "liquor stores, and Wal-Marts". The group eventually broke into a government facility that was housing the digital A.I. mind of Arnim Zola and stole it, along with some other weaponry. After Zola convinced Thomas Renk to experiment on him and turn him into a grotesque giant (with Zola's AI brain) dubbed "Siegsoldat-X", the group have the A.I. established as their leader. Under Zola's leadership, the Marauders kidnapped people for his grisly experiments. Eventually the Marauders and Zola were defeated by Captain America and the Falcon with help from the freed people that the Marauders had kidnapped.[citation needed]

Retrieved from "https://marvel.fandom.com/wiki/Marauders_(Earth-1610)?oldid=5548609"
Community content is available under CC-BY-SA unless otherwise noted.