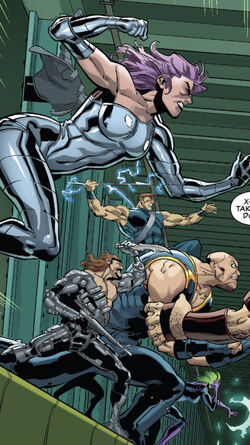 We're Marauders, babe, an' we got a philosophy! The only good mutant is a dead mutant-- 'less.. Of course, it's us!

The Marauders began as a group of super-powered mercenaries working on behalf of the interests of the villain Mister Sinister. Sinister had long devoted his life to the study of genetics and mutations in particular. Knowing of the existence of an underground community called the Morlocks, Sinister decided that their existence was compromising and diluting the mutant gene pool. To remedy this, he made Gambit, a thief who owed Sinister a favor for restoring balance to his formative mutant powers, form a group of mercenaries into a team of Marauders that would work for him.

In one of the Marauders' first known activities, based on Sinister's interest in the genetic lineage of the mutants Cyclops and Phoenix, several members of the team hunted Cyclops' wife Madelyne Pryor and child Nathan. She used her latent psychic powers to defend herself, but failed to stop the kidnapping.

The majority of the Marauders trailed the Morlock Tommy[3] while Gambit led Sabretooth, Prism, and Blockbuster down another path.[4] After repaying Tommy for her leading them there by killing her, the Marauders began a systematic massacre of the population of the Morlocks.

Unaware of the Marauders' true intent, Gambit tried to stop them but was attacked by Sabretooth. He was only able to save a Morlock girl (the mutant now known as Marrow) before escaping. The Marauders were confronted by the Morlocks' allies, the mutant hero team the X-Men, along with other heroes such as Thor[5] and Power Pack.[6] Ultimately, the X-Men and the heroes stopped the massacre, but not before significant casualties were sustained by both sides.

Later, another Marauder, Malice, attempted possession of the X-Men ally, Dazzler, but was defeated by Dazzler's friends in the X-Men.[7] The Marauders then went on to attack the X-Men's associate Polaris. Sinister had decided, unbeknownst to Malice, that the mutant would make a genetic match with Malice and allow the two to become permanently bonded.

It seemed that Polaris had managed to single-handedly and ruthlessly defeat the team, but in fact it was Malice who had taken possession of Polaris and declared herself leader of the Marauders.[8] Malice, in Polaris' body, led the Marauders on several missions, including a failed attempt to capture Madelyne Pryor, who reappeared in California and would be rescued by the X-Men.

When a demon invasion occurred in New York City, Malice/Polaris led a Marauder attack on the hero teams X-Men and X-Factor. Several Marauders who were believed to have died in previous battles had reappeared. The heroes defeated the Marauders, many of whom were killed during the battle, but Malice and Sabretooth escaped.

Months later, when investigating Sinister's facilities, the X-Men discovered that Sinister had kept genetic information of the mercenaries in order to create clones of them. Some of the clones were released, but the X-Men defeated them and they died.[9]

Years later, Sinister activated several Marauders and had them chase the mutant Threnody who was escaping her indentured servitude to Sinister. They were confronted by the hero X-Man, and in the course of the battle, most of the Marauders were killed. The remaining member, Riptide, was sent back with implanted memories that Threnody was killed as well as all the Marauders.[10] Nevertheless, more Marauders later returned, and Threnody agreed to return to Sinister.

Later, Sinister disguised several Marauders as agents of the villain Apocalypse in order to trick the hero Cable into forming an alliance with him. Another time, Gambit needed to invade another of Sinister's bases, and Scalphunter revealed that all cloned Marauders were genetically programmed to never turn against Sinister on penalty of death. Gambit turned to Sabretooth, who was never cloned, and the two invaded Sinister's base after facing several Marauders as guards. Presumably, as long as Mister Sinister remains active, he will always have at hand a cloned army of Marauders in some capacity.

The Marauders returned when a digitized version of Malice possessed the body of Omega Sentinel, Lady Mastermind and Mystique were revealed to have betrayed the X-Men and joined the Marauders.[11] They have all also aligned themselves with the Acolytes.

They claimed to have a list of a group of people or places that have information of the future, or even alternate timelines. Sunfire and Gambit seemingly killed Cable, while Senyaka attacked Deadpool. Riptide killed Quiet Bill, and Scalphunter and Vertigo killed the Witness. It was revealed in flashbacks that Arclight brought down the Wohnhaus Strucker, a building which had ties to the future.

It is also revealed that Harpoon impaled Vargas with harpoons until his death. The Dark Mother was another victim taken out. They also thought they killed Gateway, although he survived. Bishop was also hunted in these attacks.

Later, the Acolytes attacked the X-Mansion looking for Destiny's diaries, but found fakes. They also went to take out Blindfold, but she saw them coming and prevented her death. Iceman and Cannonball fought the Marauders for the diaries, but the diaries were destroyed in the process.

After the death of Mister Sinister, a contingent of Marauders clones were awakened consisting of (Arclight, Harpoon, Riptide, Sabretooth, Scrambler, and Vertigo) in the former Sinister's lab in The Kitakyushu Smelting Plant, Japan, where Essex kept vials of the deadly Legacy Virus. The clones attacked Vanisher, who tried to steal the virus, and later battled with X-Force. X-Force killed all clones.[12]

The team was later gathered by Susan Hatchi (truly Da'o Coy Manh, Karma's half-sister), including Chimera as the leader, Arclight, Blockbuster, Harpoon, Prism, Vanisher, and a bunch of human soldiers.[13]

Determined to make them pay for their past massacre of the Morlocks, Magneto tracked the remaining Marauder clones, except for Sabretooth, and killed them, which activated clones of the others. Scalphunter was also spared, though his arms and legs were severed. After that, Magneto prepared new clones of the original Marauders to deploy them at his command in the future.[14] Following World War Hate, Magneto lead various mutants from Red Skull's concentration camp on Genosha and began reconstructing the island. However, S.H.I.E.L.D. appeared to take Magneto into custody. Powered by MGH, Magneto overpowered S.H.I.E.L.D.[15]

Magneto had the intention of destroying S.H.I.E.L.D.'s mutant files along with their Cerebro. Magneto unleashed the Marauders as a distraction while he completed his objective. Not wanting to wage war against S.H.I.E.L.D. yet, Magneto and the Marauders retired, however, noting that the Sabretooth clone's healing factor and killing tendencies were resisting his programming, he killed him before leaving.[16] After various mutants were killed, the Marauders accompanied Magneto's investigation.[17]

The team had been reformed under mysterious circumstances to retrieve mutants like Blindfold. After a mix-up with the O*N*E occurred that led to another Morlocks Massacre, Emma telepathically set the Marauders up in conflict with the X-Men. After being beaten, the team professed their innocence but Chamber didn’t believe them and burned them to death with his psionic flame. Harpoon survived long enough to drive his energy-disrupting weapon through Chamber’s chest before getting shot by Hope Summers.[18]

After the X-Men relocated to Krakoa and invited all mutants to join them, most of the Marauders were mysteriously absent. Psylocke and the newly-formed Hellions were sent to investigate one of Mr. Sinister's old cloning farms, the Orphanage. Unbeknownst to the Hellions, Madelyne Pryor had returned and captured several of the founding Marauders, plotting to use them in a ritual.[19]

When the Hellions arrived, they were ambushed by zombified Marauders controlled by Pryor. After a lengthy battle, the Marauders defeated most of the Hellions and Pryor enslaved Havok.[20]

Psylocke and Wild Child quickly rescued Scalphunter, Nanny and Orphan-Maker. When Madelyne Pryor began to awaken each of the cloned Marauders, she lost her grip on the zombified Marauders. Scalphunter, unwilling to let his former teammates remain zombies, killed each of them and then shot Madelyne Pryor in the heart. Havok, enraged at seeing his former lover die, created a plasma blast that destroyed the orphanage and all of the cloned Marauders, though the Hellions managed to escape. At Scalphunter's request, the legacy Marauders were all scheduled for resurrections on Krakoa, though he felt they should all go their separate ways.[21]

Retrieved from "https://marvel.fandom.com/wiki/Marauders_(Earth-616)?oldid=6076024"
Community content is available under CC-BY-SA unless otherwise noted.