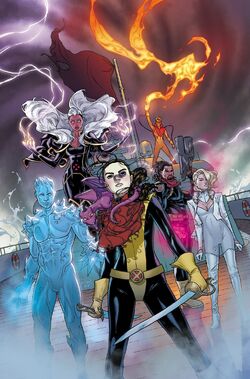 The origins of the Marauders are a consequence of Professor X and Magneto offering the monopoly of all Krakoan commercial distribution to the Hellfire Trading Company. The leaders of the Hellfire Trade Company, the White Queen and the Black King, respectively in charge of the Krakoan legitimate trade with friendly nations and of a black market in countries that do not recognize Krakoan sovereignty, would be granted seats in the Quiet Council of Krakoa. The White Queen, however, demanded a third seat for a third leader of the Hellfire Trade Company.[1]

When Kitty Pryde learned that she could not return to Krakoa through its Gateways, she ended up hijacking a boat to return to the country, deciding to call herself "Kate". Upon her return, she was contacted by the White Queen, who told her of the dire situation involving mutants - while many countries accepted Krakoa's sovereignty, others did not, using militaristic, technological, or ideological means to prevent mutants from reaching Krakoa. The White Queen invited Kate to join the Hellfire Trading Company, to captain a ship and to lead a crew responsible for rescuing these mutants who cannot access the Krakoan Gateways. After learning of one such incident in Russia following Iceman's near death experience by the hands of Professor Phobos, Kate asked him and Storm to help liberate the refugees, recruiting Pyro on the way there. Upon freeing the mutants in Vladivostok, Kate proclaimed her group the "Marauders" to the public, though she admitted it was a hasty name designed so their enemies couldn't pin their actions on the X-Men.[2]

The Marauders sailed the oceans acting as hijackers to some and heroes to many, posing a rising interest to the U.S. Naval Intelligence. In one of their operations, the Marauders took control of one of the Black King's ships commanded by Batroc the Leaper. Instead of sending the cargo to its original destination, an African nation, the Black King decided to sell it to an American rich club, a much more profitable deal. Such an intervention by the Marauders attracted the Black King's hatred, which would only grow even further when Kate was officially appointed as the Hellfire Trading Company's Red Queen.

The Marauders' following assignment was to meet Bishop in Taipei, where he was investigating the alledgedly kidnapping of Lim Zhao by Krakoan forces. Upon their arriving, the Marauders learned of Charles Xavier's murder on Krakoa, briefly interrupting their mission on Taipei. In London, the Marauders finally were given a proper ship, the Marauder.[3] With Bishop joined to their ranks (and also as the new Red Bishop of the Hellfire Trading Company), the Marauders kept doing their rescue missions all over the globe. When Kate and Bishop came back to Taipei to search for Lim Zhao, they discovered the kidnapping allegations were a ruse orchestrated by his wife, Chen Zhao, who was secretly in coallition with an anti-mutant corresponding organization to the Hellfire Trading Company: the Homines Verendi.[4]

The Marauders learned of Kate's disappearance when they took some rescued to the Island M and didn't find her there, as expected. The Red Bishop went back to Madripoor,[7] where he found Kate's body in the Homines Verendi's possession. Joined by Iceman and the White Queen, the Red Bishop got Kate's body from the Verendi, before they could autopsy the corpse.[8]

Enraged by Kate's death, the Marauders made their strike at the Verendi after they impeded the Yellowjacket, who secretly sneaked into Pyro's body, from getting in Krakoa.[9] With the help of the White Queen, the White Knight, the White Bishop, the Stepford Cuckoos and Forge, the Marauders sailed to war against their enemies, destroying the Russian government's anti-mutant armament.[10]

Retrieved from "https://marvel.fandom.com/wiki/Marauders_(Pryde)_(Earth-616)?oldid=5858870"
Community content is available under CC-BY-SA unless otherwise noted.