Marvel Database
Register
Don't have an account?
Sign In
Advertisement
in: Dawn of X, Comics, Marauders Vol 1,
and 111 more
English

View source
watch 01:25
Jurassic World: Dominion Dominates Fandom Wikis - The Loop
Do you like this video?
Play Sound
Part of the Dawn of X event

4 - Every Mutant Ever Variant

Keep recording... if you're a mutant and can't get to Krakoa... then the Marauders will bring you home!

Appearing in "I'm on a Boat"

Synopsis for "I'm on a Boat"

A while ago, Storm and Nightcrawler were helping mutants move to Krakoa through a Krakoan gateway in Central Park. One of them, Kitty Pryde, is awestruck and is ready to go to the island. She walks into the portal, but it ended up rejecting her and breaking her nose in the process. As Ororo and Kurt look on at Kitty, she is in shock over what just transpired.

Six days later, Kitty is sailing towards Krakoa on a stolen boat with her faithful companion Lockheed and groceries for Logan. When she makes it to the shore, she meets up with Bobby and Logan, with the former welcoming her to Krakoa. As Logan swims towards her boat to get his groceries, Kitty watches him in awe and is shocked that the Five were able to bring him back. She and Bobby walk upon Krakoa, and Kitty wonders if she already has a place there. Bobby says she doesn't and explains that there is a process on setting up houses. Kitty wants to talk to Bobby about an offer from the Hellfire Club, but he interrupts her by saying she has to check on why one of the gates has no traffic and leaves her.

After making a snarky comment at Bobby, she gets a telepathic call from Emma Frost. Emma asks her why she hasn't told her friends to call her Kate, and Kitty replies that they can't handle it yet. Emma then explains that she trusts Kitty because of how long she has been fighting for mutants and considers her dependable, which is why she needs her help for a mission. Emma reveals that she is creating a new economy with the life-sustaining drugs, but needs to control the black market as well. She dubs Kitty a captain in her new trading company, offering her a ship and the ability to recruit anyone she needs for her mission. She also asks her to help mutants reach the gates around the world in the process. She says that Kitty isn't a schoolteacher anymore, and needs to start living in the new world.

In Vladivostok, Iceman prepares to help mutants cross into the gate but ends up confronting a splinter group of Russian Armed Forces led by a man in a suit of armor named Phobos, who declares that Russian mutants will not go to Krakoa. He decrees that mutants will either serve the state or get crushed, and blasts Bobby with a power-nullifying burst and tells the soldiers to open fire on him. Bobby jumps back through the gate, narrowly escaping with his life, and runs into a plastered Kitty. He explains the situation in Russia and Kitty drunkenly tells him to get into the boat, with a nearby Ororo joining in the process.

In Taipei, a woman named Mrs. Zhao leads a protest with the people of Taiwan and asks why the mutants took her husband Lim. After leaving the stage, she runs into Bishop. He tells her that he is from Krakoa and asks to speak with her privately. He says that Krakoa doesn't have any records of her husband entering a gateway, but Zhao interrupts him and says his word is useless. As Bishop leaves, he reports to Charles Xavier about something rotten happening in Taiwan.

Bobby explains to Kitty and Ororo about the situation in Vladivostok, when they are interrupted by Pyro who was sleeping below deck. Bobby realizes that this is not Simon Lasker, but the original Pyro. Pyro explains that he was gone for a while, and is revealed to be one of the first mutants who was resurrected as a lab experiment. He was going to steal the boat they were using, but ended up taking a nap. After being forcibly drafted by Ororo, the foursome make a plan to save the mutants from Phobos.

They reach Siberia and fight Phobos who drains Storm and Iceman's powers. Kitty disables his suit using her phasing powers, then she takes down a squad of soldiers and a tank single-handedly while stealing an officer's sword. After Pyro and Lockheed stop the rest of the soldiers, Kitty tells the group that they should take the gate back to Krakoa. The others deny this, and Ororo says that they will leave together. The captured mutants thank the group, with one of them recording Kitty. She declares that they are the Marauders, and that they will bring mutants who can’t get to Krakoa there for safety.

Later, Kitty and Ororo discuss the team. Ororo remarks she does not like the name “Marauders,” and Kitty replies that she made the choice on the spot and she's not sure if the X-Men would want to be associated with their plan. She asks her if Ororo will join her on the open seas and Ororo says that she will to help enslaved mutants around the world, but Kitty has to deal with Emma Frost. Kitty reaches out to Emma telepathically to accept the position she'd been offered earlier, Emma already knows about her plan and approves, as well as commends her decision. Bobby asks Kitty where they are going, and Kitty replies anywhere they want, but requests that they also start calling her Kate.

THE X-MEN SAIL AT DAWN!

Even in this glorious new dawn, Mutantkind faces hardships and oppression from their human counterparts. Led by Captain Kate Pryde and funded by Emma Frost and the Hellfire Trading Company, Marauders Storm, Pyro, Bishop and Iceman sail the seas of the world to protect those hated and feared! 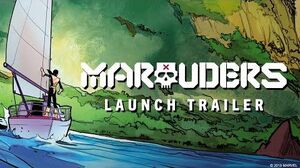