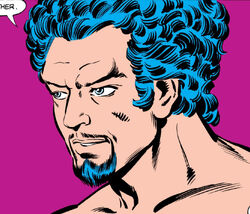 At some point in the endless no-time of Limbo, Immortus grew lonely. He rescued a woman from a sinking ship who was destined to die and brought her into Limbo with him. Using subliminal equipment, Immortus compelled this woman to love him. They lived inside an artificial pocket of progressive time in Limbo, where the woman ultimately carried Immortus's child to term, naming him Marcus. Marcus's mother spontaneously reverted to her own time eventually, leaving Marcus and his father alone in Limbo. After Immortus allegedly ceased to exist when Kang died, Marcus was left completely alone. His unique nature as a child born in Limbo made it impossible for him to leave Limbo without causing temporal disharmony. To get around this problem, Marcus arranged to be reincarnated and reborn on Earth through a mortal woman. He chose Carol Danvers, a.k.a. Ms. Marvel, and plucked her out of normal space to transport her to Limbo. Marcus manipulated Carol's emotions subliminally like his father did before him, and made her love him. He impregnated Carol with literally his own seed, then sent her back to the moment she left with no memory of her time in Limbo.[1]

Carol experienced an accelerated pregnancy over a matter of days before giving birth to baby Marcus.[2] As Marcus rapidly aged back to his original age, he explained his history to the Avengers. Time still ran amok around Marcus, as he attempted to construct a machine that would stabilize him and the Timestream. A suspicious Hawkeye destroyed the machine before it took effect, however, forcing Marcus to exile himself back to Limbo before the timestream was destroyed. Carol, still under Marcus's influence, volunteered to join him in Limbo and they departed.[1] Once they reached Limbo, however, Marcus's accelerated aging did not stop, and he quickly aged to the point of death and ash. Freed of his influence with his death, Carol Danvers returned to Earth.[3]

Like this? Let us know!
Retrieved from "https://marvel.fandom.com/wiki/Marcus_Immortus_(Temporal_Limbo)?oldid=6189054"
Community content is available under CC-BY-SA unless otherwise noted.