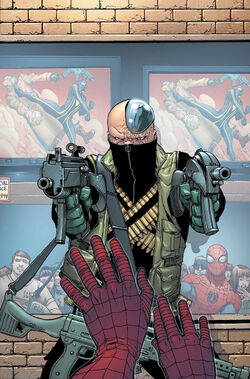 And that, Spider-Man, is how I win. One life. One random person on the street below. That's all I need to get away. And body after body, they'll give me what I want. Because you're weak. All of you. Because you're stupid enough to care.

Marcus and his wife were accidentally harmed during an attack on his Wall Street trading company for losing client's money. Marcus survived, but his wife did not. Shrapnel was fixed within his brain, causing him to feel virtually no human connection whatsoever.

With his new lease on life, he escaped an institution and began killing people, eventually even shooting Spider-Man, who had lost his spider-sense at the time. He was ultimately defeated when Spider-Man used a combination of a bullet-proof suit and magnetic webbing. Spider-Man saved his life from the police, because of his new "No One Dies" policy after the death of Marla Jameson.[1]

Following his arrest, he was placed in Ravencroft Institute. However, he soon escaped, killing Dr. Ashley Kafka in the process.[2] He ended up confronting the CEO of a restaurant and he shot her up with an offer - 12 million dollars to go into New York City and kill people while wearing the logo of her competitor, which she forcefully accepts. Otto Octavius, now Spider-Man, is able to track him down once more in Grand Central Station and manages to save the rest of the civilians, take his gun, shoot him in the shoulder, and hold him at gunpoint.

Having the man who once told him that he wouldn't let anyone else die hold him at gunpoint causes him to tear up and experience fear for the first time since his accident, finding the feeling wonderful. Despite Peter's persona begging Otto to spare him, the Superior web-slinger pulls the trigger, putting an end to the mass murderer once and for all.[3]

However, almost a year later, the Jackal brought Massacre and numerous other Spider-Man villains back to life. For some reason, though New U is supposed to revive individuals without any defects, Marcus assumedly retains the shrapnel in his brain, as he is seen with the metal plate over his head.[4] He also continues to get into fights with some of the other revived villains, such as Kangaroo.[5]

Unable to feel emotions for his common man, Marcus had no problem killing innocent people.

He used guns and bombs.

Like this? Let us know!
Retrieved from "https://marvel.fandom.com/wiki/Marcus_Lyman_(Earth-616)?oldid=6465920"
Community content is available under CC-BY-SA unless otherwise noted.