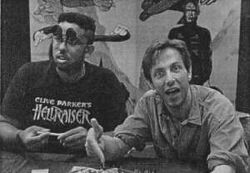 McLaurin studied art at Pratt Institute in Brooklyn, New York, before joining Marvel as an assistant editor. He rose to become a full editor working on the Epic Comics imprint and on other Marvel projects. These included Epic's various Alien Legion limited series, its "Heavy Hitters" line of action comics by Peter David, Howard Chaykin and others, and licensed titles such as the legendary manga Akira and filmmaker and fantasy novelist Clive Barker's Clive Barker's Night Breed and Hellraiser. He also edited the creatively daring Razorline imprint of superheroes created by Barker for Marvel.

McLaurin developed Marvels — a painted-art miniseries recounting the Marvel universe epic from the point of view of an Everyman not privy to the omniscient-view details given real-life comics readers — after its conception by comics newcomer Ross, a future industry superstar whom McLaurin worked with and encouraged. Teaming the artist with writer Busiek and shepherding it through Marvel as a prestige project, McLaurin saw Marvels win 1994 Harvey Awards for "Best Continuing or Limited Series", "Best Single Issue or Story" (issue #4), and "Excellence in Production/Presentation"; the graphic novel compilation released in 1995 won the following year's award for "Best Graphic Album of Previously Published Work". It won critical accolades in such mainstream magazines as Entertainment Weekly.

As a writer, McLaurin helmed the 18-issue run of the Luke Cage revival series Cage (1992-1993). He also wrote issues of The Punisher (1987-1995 series) and occasional features in Marvel Comics Presents.

After ten years at Marvel, McLaurin has moved into a career in Art Direction and Digital Design. He was Art Director for the Channing Bete Company, a publisher of health and Educational materials in South Deerfield, MA. Most recently he has become Design Director for Great Source, a Division of Houghton Mifflin Harcourt. He is pursuing a Masters Degree in Digital Design.

McLaurin was profiled in the Bullpen Bulletins printed in July 1989 issues.

Like this? Let us know!
Retrieved from "https://marvel.fandom.com/wiki/Marcus_McLaurin?oldid=6841885"
Community content is available under CC-BY-SA unless otherwise noted.