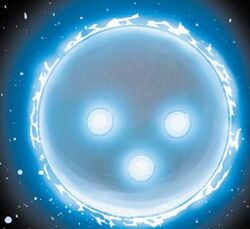 Marduk was revealed to have been a thought form created by the imaginations of mankind. Humans told stories about Marduk coming and destroying them when they had sinned, wiping out whole civilizations. The stories told about it were what created it and what drove it to come to Earth and plan its destruction so it is unclear whether they truly did any of the things associated with it before it ultimately ceased to exist.[1]

Marduk possessed immense power and can easily wipe out civilizations by creating natural disasters.[1] According to Ayaman, Marduk could destroy the entirety of Earth if it wanted to.[2] Not even when the Silver Surfer combined his power with that of Earth could he stop it.[1]

Like this? Let us know!
Retrieved from "https://marvel.fandom.com/wiki/Marduk_(Entity)_(Earth-616)?oldid=6007430"
Community content is available under CC-BY-SA unless otherwise noted.