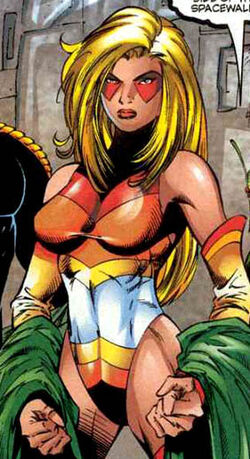 Princess Mari of Homeworld, along with her brother, Prince Argon, were the only survivors of the slaughtered figurehead royal family just before Rann's return. They had the hapless job of initiating a rebellion against Baron Karza. Argon, who became Force Commander after his alteration in Karza's Body Banks, eventually died after being the temporary host for a resurrected Karza. Marionette called the Micronauts family and Commander Rann her love. She served as nominal leader of the Micronauts during a brief, trying period when a demoralized Commander Rann removed himself from active duty following a major defeat. Strong-willed and independent while still warm and generous, she showed no mercy to those who willingly served Karza's evil. But she would risk her life to persuade any who serve Karza because they saw no other hope that there was an alternative. Her hand of friendship brought one of Karza's former creatures, Huntarr, into the fold.[citation needed]

Like this? Let us know!
Retrieved from "https://marvel.fandom.com/wiki/Mari_(Earth-616)?oldid=6471091"
Community content is available under CC-BY-SA unless otherwise noted.