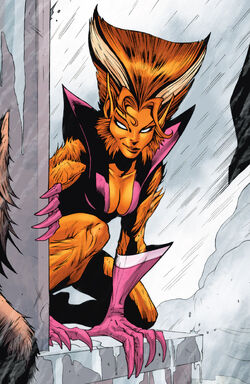 The mutant known as Feral grew up in a New York City tenement as Maria Callasantos. She had an older sister, Lucia, who would also prove to be a mutant, a younger brother, Matteo, and a younger sister, Carolina. Their father beat his wife and abandoned the family after the birth of Carolina, the youngest of the children. He was eventually found dead from a drug overdose.[2]

Maria blamed her two younger siblings for the fact that their father deserted them. Carolina later fell down a staircase to her death while Maria was babysitting her; it is unclear whether Carolina's death was an accident or whether Maria killed her. Later, Matteo was chasing Maria's pet pigeons on the tenement roof when he allegedly tripped over the ledge. He held onto the ledge as long as he could, but soon fell to his death. Maria was a witness, and, again, it is unclear if she had killed him.[3]

Maria's mother had a boyfriend named Harry Bellinger, who was an alcoholic and a cocaine addict who got Mrs. Callasantos addicted to drugs as well. Lucia's mutations began to emerge, much more slowly than Maria's, and caused her to start growing fur. When Lucia was seventeen, Bellinger tried to rape her, but Maria, now fifteen, whose mutations had emerged much more quickly, stopped Bellinger and killed him. Together Maria and Lucia hid the body. Knowing that Maria had murdered Bellinger, Mrs. Callasantos killed Maria's pet pigeons in revenge. Seized by hatred, Maria then killed her mother.[3]

Maria and Lucia went to live among the underground community of mutants known as the Morlocks. The two sisters came to resemble humanoid animals; Maria took the name "Feral", and Lucia became known as "Thornn".[4][5]

Eventually, Feral joined the team of mutant adventurers that became known as X-Force; none of her teammates knew about her past. Thornn, on the other hand, fell in with the Brotherhood of Evil Mutants that was organized by Toad.[6][5]

For a time, Feral served well in X-Force. But then the team attempted to rescue government official Henry Peter Gyrich from the terrorist Mutant Liberation Front, led by Reignfire. Feral hated Gyrich, who was no friend to mutants, and Reignfire persuaded her to join the Mutant Liberation Front and to kill Gyrich. When Feral attacked Gyrich, X-Force's leader Cable shot her with a non-lethal charge, but then Reignfire abducted her.[7]

Feral emerged from hiding when the New York City police captured Thornn. Feral confronted Thornn and X-Force member Cannonball. Thornn revealed that she had seen Feral kill Harry Bellinger, and Cannonball provoked Feral into admitting that she had murdered her mother. Cannonball overpowered Feral, and an old friend of Lucia's, Police Detective Jose Hidalgo, arrested her for killing three members of her family and Bellinger. Thornn went free and Feral was sentenced for murder.[2] During her jail time, Feral discovered she was infected with the Legacy Virus.[8] Escaping jail, she, along with other virus sufferers, tried to obtain Isotope E, thinking it to be a cure.

Feral, now mentally distraught from her illness, later resurfaced with a new incarnation of the Hellions led by King Bedlam.[9] All of the rage that she had felt for Siryn in the past boiled over in an argument where Feral sliced through Siryn's vocal cords, incapacitating her powers.[8]

After being cured from the virus, Feral apparently had a change of heart. She and her sister joined the Mumbai branch of X-Corporation.

She stayed with X-Corp for quite some time, but she returned to New York, where she and her sister lost their powers thanks to the Scarlet Witch. Feral was summoned to Wakanda by the Black Panther. Feral lost her mutant powers after M-Day but, through in as yet unexplained way, she and her sister regained their feline looks, restored with an unknown process by Romulus.[10] She accompanied Sasquatch, Wolfsbane, Thornn, and Wolverine to the Weapon X compound to search for Wild Child. While on this trip she was murdered by Sabretooth.[11]

Feral, along with many other deceased mutants, was resurrected by Selene and Eli Bard with the Transmode virus and attacked her former allies. Like most of the resurrected mutants, she died when Selene was killed.[12]

Later she clashed with Wolfsbane and Shatterstar, trying to kill Rahne and her child, but it turned out that she was just a ghost, and was returned to the world to serve as anchor for the demons and gods, which were hunting for Rahne's child. Cu Sith, Kasha, Okami and Bastet, all appeared immediately after that and attacked Rahne. Maria followed Rahne when she hid in X-Factor Investigations Headquarters and fled in a car with Werewolf by Night.[13]

Years later, Feral resurfaced in the newly-founded mutant nation of Krakoa, having been presumably reborn by the hand of The Five, a group of mutants capable of combining their powers into a process of resurrection, brought together by Charles Xavier as part of his plans for mutant ascension.[14]

Feral is a mutant possessing a number of superhuman physical attributes:

Feral is a formidable hand to hand combatant.

Feral possesses superhuman strength enabling her to lift about 1 ton.

Feral fights with her natural claws.

Like this? Let us know!
Retrieved from "https://marvel.fandom.com/wiki/Maria_Callasantos_(Earth-616)?oldid=6420718"
Community content is available under CC-BY-SA unless otherwise noted.