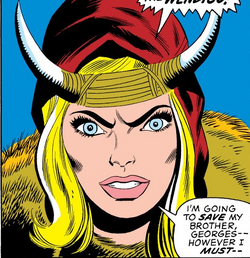 Marie Cartier was the sister of Paul Cartier, a Canadian hunter who was transformed into the Wendigo after performing an act of cannibalism when he and his friends Georges Baptiste and Henri Cluzot were trapped in a cave by wolves.

Unaware of this, she mistook the Hulk for the Wendigo and attacked him with a group of hunters. Learning what was going on, the Hulk agreed to help her find her brother. He instead found Georges who told Marie the fate of her brother. Despite the Hulk's best efforts, he could not save Paul from the curse of the Wendigo, and Paul's mind was completely dissolved by the creature's consciousness.[1]

Marie become obsessed with freeing her brother, and blaming Georges for his brother's condition, she forced him into helping her find a cure. Marie however was completely unaware that the reason why Georges went along with her quest was because he had fallen in love with her. She learned of the mystical spell needed to free her brother from the curse; however, it required that someone else take the curse in his place. Marie lured the Hulk back to Canada and tricked him into participating in the ceremony. This became complicated when the Hulk and Wendigo got into a fight. This fight prompted the Canadian military to send in their operative Wolverine to stop the battle.[2]

The battle ended in the Hulk being knocked out and reverted back to Bruce Banner. When Georges realized that the Hulk was already a man cursed, he refused to help Marie and ran off. Banner transformed into the Hulk once more and continued his fight with Wolverine while Marie sought cover in the cavern. There, she find that Georges had completed the ceremony using himself as the person to accept the curse. Georges revealed that he did it for Marie out of love, before running into the wilderness, leaving Marie and Paul to mourn for their friend.[3]

Like this? Let us know!
Retrieved from "https://marvel.fandom.com/wiki/Marie_Cartier_(Earth-616)?oldid=4866165"
Community content is available under CC-BY-SA unless otherwise noted.