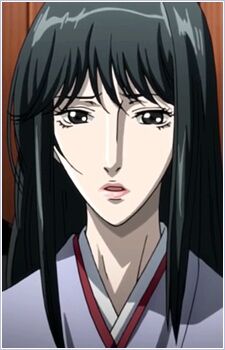 Mariko Yashida was the daughter of Shingen, head of the Kuzuryu. At some point in the past, she met Logan and the two became lovers. One night, they came under attack from A.I.M., but Logan fought them off.

A year after these events, Mariko went back to Japan, but there she was forced by her father into an arranged marriage with Hideki Kurohagi, the owner of Madripoor. The marriage would give Shingen a foothold on Madripoor, and Hideki a larger criminal empire. When Logan learned about the wedding from his friend Tesshin, he came to Japan to re-unite with Mariko and save her from her father.[1]

Logan's first attempt to get Mariko out of her fathers house failed when he lost a duel to Shingen.[2] After the Public Intelligence Security Agency attempted to arrest Shingen and te Kuzuryu, Shingen fled to Madripoor and forced Mariko to come with him. Logan followed, helped by his new ally Yukio.[3] After several more battles, Logan was able to reach the Dragon Palace in time to stop the wedding ceremony, and defeated Shingen in combat. Hideki, not wanting to give up his bride, tried to kill Logan with a poison, but Logan turned the tables on him by stabbing Hideki with his own venomous dart.[4]. Unfortunately, in the struggle, Hideki's gun went off and fatally injured Mariko. As she died, Mariko thanked Logan for all he had done and claimed he save her nonetheless.[4]

Like this? Let us know!
Retrieved from "https://marvel.fandom.com/wiki/Mariko_Yashida_(Earth-101001)?oldid=6290591"
Community content is available under CC-BY-SA unless otherwise noted.