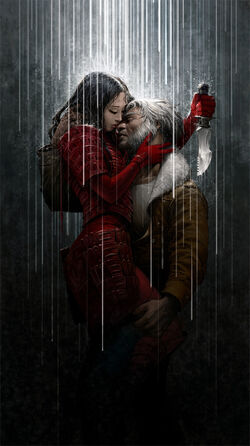 All my life, I was barked at and commanded by men like you. Men who expected me to bow down to their every desire. To serve their own agenda. No More!

Mariko Yashida was the daughter of Japanese crimelord Lord Shingen, leader of Clan Yashida. She and Wolverine first met when the X-Men sought the help of her cousin, Sunfire. Although she was first scared of Wolverine, Mariko found herself attracted to him. Wolverine was charmed by her beauty and refined manner.[1] The two spent a great deal of time together in Japan, and fell in love when she came to visit him in New York.[2]

However, Mariko was forced to marry a man named Noburu-Hideki, who was one of her father's criminal associates. Noburu-Hideki was a cruel man who beat Mariko. Mariko refused to leave with Wolverine because she felt duty-bound to obey her father’s wishes. Wolverine was drugged and challenged by Mariko's father to a duel. What Mariko didn't know was that her father was trying to kill Wolverine, using blows designed to cripple or kill. During the duel, Mariko was shocked when Wolverine attacked with deadly force. Wolverine noticed this and lost the will to fight and was beaten.[3]

Shingen then ordered his operative Yukio to slay a rival crimelord named Katsuyori, who was planning to kill Hideki. Wolverine went with Yukio to kill Katsuyori. While there Wolverine went into a berserker rage and battled assassins. Mariko fled back to her father’s stronghold. Repulsed by her father's crimes, Mariko vowed to kill him to prevent further dishonor from falling on Clan Yashida.[4]

When Wolverine attacked the stronghold, Hideki attempted to flee with Mariko, threatening to kill her unless he was allowed to escape. Mariko was saved by Yukio, who killed Hideki. Wolverine then killed Shingen in a savage duel. With their deaths, this made Mariko head of Clan Yashida, and Mariko and Wolverine announced their engagement.[5]

As the wedding approached, Mastermind used his psionic powers to make Mariko call off the wedding and strengthen Clan Yashida's criminal ties. After Mastermind was defeated, Mariko felt shame at the actions she had performed under his control.[6] She vowed to break her Clan’s criminal connections, she felt that she could not marry Wolverine until she did this.[7]

Mariko became a force in the Japanese criminal underworld; however, her authority was challenged by the leader of the Hand, Matsu'o Tsurayaba. Mariko's own half-brother, the Silver Samurai, also challenged her authority. Wolverine and his allies fought the Hand on her behalf, but when Mariko sought to make peace with the Hand, she was poisoned by Tsurayaba. Wishing to avoid prolonged suffering, she asked Wolverine to grant her a quick death, which he reluctantly did.[8]

To avenge her death, Wolverine then vowed to Matsu'o that he would slice off a part of his body on the anniversary of Mariko's death until there was nothing left of him.[9] A promise that Wolverine would keep for years until Matsu'o finally died.[10][11]

After her death, Mariko's soul was sent to Hell because of her past actions as the head of the Yashida Family. Afterwards when the the Red Right Hand sent Wolverine's soul to Hell, she was forced by Satan to torture him in order to break his spirit.[12] Mariko's soul was then sent back to her cell, and after Wolverine was able to create a riot in Hell in order to escape he stopped by her cell in order to free her. But Mariko refused saying that there was nothing left for her on Earth, she then bid him farewell and told him to remember her as she was before her death and not how he saw her in Hell.[13]

Years after her death, Gorgon resurrected Mariko and made her one of his enforcer, she was now known as the Scarlet Samurai.[14] Gorgon then planned to kill the current leader of the Clan Yashida, Shingen Harada II a.k.a The Silver Samurai in order to replace him with Mariko which would have resulted in an abrupt takeover of the Yashida Corp by the Hand.[15]

After taking care of the Silver samurai, Gorgon and the Scarlet Samurai were able to acquire a fresh supply of a new designer made supplement called Regenix decvelopped by Yashida Corp. The Regenix allowed its user to gain accelerated regeneration abilities but the drug was addictive and short lived and could cause the death of its users in case of prolonged use. Renegix also lost its effectiveness if exposed to low temperatures.

Gorgon used the Regenix for his army making his undead assassins almost unstoppable but the stock of Regenix was running low, and soon enough Old Man Logan became involved. Gorgon tasked the Scarlet Samurai to take care of Logan, with the help of the undead ninja of the Hand powered by Regenix, she was able to beat him. With Old Man Logan beaten, Gorgon then told Mariko to reveal her identity to the old man which horrified him.[14] Gorgon then told Mariko to kill him, but she hesitated, her memory of Logan slowing coming back, the old man used this opportunity to escape and swore he would kill Gorgon for what he did to her.[14]

Despite the brainwashing of the Hand, Mariko was slowly regaining her senses, to the point she stopped Gorgon from killing a scientist in cold blood. Not long after, the Silver Samurai revealed he survived Gorgon's previous attack and teamed up with Old Man Logan to stop him. The duo was able to defeat Gorgon's army and free Mariko from his control.[16] Now free Mariko teamed with Old Man Logan and decided to go to Madripoor in order to stop the Gorgon from using the Regenix to conquer the island. The duo was able to destroy the last batch of Regenix before facing him.[17] Gorgon was able to stab Old Man Logan through the chest with a sword but the old man also managed to severely wounded him with his claws.

Mariko angry about what Gorgon did to her and about what he just did to Old Man Logan confronted him, she was able to defeat him but as she was about to kill him, he was saved by his ninja army and was able to escape. But Old Man Logan's wounds overwhelmed his healing factor and as he was about to die, Mariko decided to inject him with the Regenix saving his life. After checking on Silver Samurai to make sure he stopped the production of Regenix, she then gave the old man the last remaining doses of Regenix and told him to use them in case of emergency.

After thanking Old Man Logan, Mariko now free from the Hand's control and from her old obligations with the Clan Yashida said her goodbyes to the old man and decided to rediscover the world after being gone for so long. [18]

Later on, Mariko moved to Vancouver where she was tracked by Old Man Logan, she explained to the old man that she was now trying to live a normal life and as much it pained her she needed to stay away from people like him. Old Man Logan understood and only asked her a favor, he wanted her to take care of a little girl named Maureen Bouchard. He explained to her that 50 years in the future, Maureen was his wife, and he was still blaming himself for her death, so to make amends of his past actions and to make sure that Maureen lived a peaceful life away from people like him in this reality, he put some money aside for her but he also needed someone to keep an eye on her. Mariko accepted, she then told him he was a good man with a good heart before saying her final goodbye to him.[19]

An accomplished businesswoman, swordswoman, and leader.

Like this? Let us know!
Retrieved from "https://marvel.fandom.com/wiki/Mariko_Yashida_(Earth-616)?oldid=6179394"
Community content is available under CC-BY-SA unless otherwise noted.