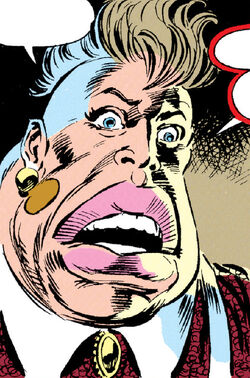 Marilla was an Inhuman who served as nanny to the royal family and, most recently, to the daughter of the Avenger Crystal: Luna. Marilla took up residence with Crystal and Luna in Avengers Mansion, and at first had an antagonistic relationship with the Avengers' butler Edwin Jarvis, as they competed over who could be most useful.[1]

After a while, however, the two servants became friends, and Marilla would help Jarvis with his duties around the mansion. Unfortunately for Marilla, however, she was later killed by the Avenger Iron Man when he was controlled by the time traveller Kang.[2]

Like all Inhumans, Marilla had certain advantages over humans, so she aged more slowly, and possessed increased strength, reaction time, speed, and endurance compared to a normal human woman.

As an Inhuman, Marilla's strength was superior to a normal human woman.

Like this? Let us know!
Retrieved from "https://marvel.fandom.com/wiki/Marilla_(Earth-616)?oldid=5802964"
Community content is available under CC-BY-SA unless otherwise noted.