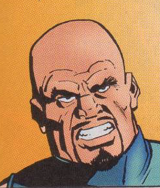 Dr. Maris Morlak was once a brilliant nuclear physicist who joined the Scientists Guild, an organization dedicated to the creation of life itself in hopes of creating a better Earth. In 1939, Morlak, along with fellow Guild members Jerome Hamilton and Carlo Zota was present for the public debut of Professor Horton's android Human Torch.[2][1]

In 1940, the Guild operated as a team of scientific adventurers called Three X. Each member used an alias, with Morlak's being 3X. Morlak was known as the "strong arm" of the group due to his hand-to-hand combat skills.[3] The Three X's visited private investigator Leslie Lenrow (a.k.a. the Ferret) and obtained the Eternity Mask, which they used the following year to empower Jerry Carstairs and turn him into the Thunderer.[1]

Morlak and his comrades met geneticist Wladyslav Shinski and the four of them eventually formed the Enclave. Through the Enclave, Morlak was directly involved in the creation of the artificial super-beings Adam Warlock and Ayesha.[4][5]

Like this? Let us know!
Retrieved from "https://marvel.fandom.com/wiki/Maris_Morlak_(Earth-616)?oldid=6076109"
Community content is available under CC-BY-SA unless otherwise noted.