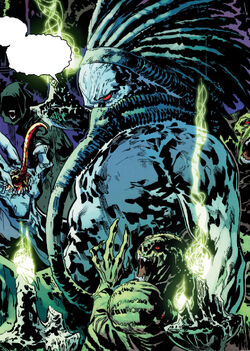 Marius St Croix is a first child of a rich and eccentric father, Ambassador Cartier St. Croix, a wealthy former president of several corporations from Monaco, and his wife, a descendant of Algerian royalty. He was born in Algiers, Algeria.[citation needed] When his mutant powers first manifested, he was overcome by an intense hunger, and killed his mother. After their grieving father threw him out.[1] Marius turned to the dark arts of the nether realms for more power. He eventually returned and invited his sister Monet to join him in conquering another dimension, but she scornfully rejected him. Fed up with her high-handed attitude towards him, Marius magically trapped her in the form of a mute creature with razor-sharp, diamond-hard red skin, Penance. Finding their sister missing, Claudette and Nicole thought Monet was dead and that Marius was to blame. Claudette opened a dimensional portal, banishing Marius. Penance followed him, after he told her that he was the only one that could cure her.[2] She would become his slave, and a steady source for the genetic material he needed to live. The twins panicked and decided that they would portray their sister so that their parents wouldn't be angry (as they thought that Monet was their favorite child).[3][2]

In this other dimension, Marius was exposed to extreme torture by unknown beings. Due to this torture, Marius had to acquire a respirator to aid in his breathing. Still he had to feed, and fuelled on by the marrow of the captive Penance, Emplate would periodically travel to our plane of reality. Marius found that if he did not feed regularly on the marrow of mutants, he would be trapped in the other dimension again, and every time he was forced back, his stay there increased.[4][1][5] In one of these trips he encountered Chamber and tried to feed off of his powerful energy signature, but Generation X arrived in time to save him. When they returned to the Massachusetts Academy, the team found Penance passed out on their lawn. She had been shuttled by the enigmatic Aborigine mutant Gateway, whose only word to the confused team was "Penance".[6]

Later, he assembled a team to torment Generation X, including Murmur, Bulwark, Vincente, and D.O.A. In an uncharacteristic move, Emplate not only recruited mutants for his team but a human as well: a woman named Gayle, from Chamber's past. When Chamber's powers first manifested he had unintentionally paralyzed Gayle, and Emplate offered her a chance for revenge, turning her into one of his vampiric minions. They were successful in capturing the young mutants, but, thanks to Bishop and Penance officially turning on Emplate, Generation X were successful in stopping the team and getting free.[7]

In the end, however, Synch was still MIA, because Emplate knew he didn't stand a chance against him, so he transformed Synch into a Parasite thrall, instead. He transported Synch to his home of St. Louis and the girls of Generation X followed him. With their help Synch was able to remember his humanity and fight the hunger within him, releasing him from Emplate's influence.[8]

Changing the roster a bit, Emplate attempted to attack the team again. His timing was very inopportune, as Monet had been knocked unconscious and had split back into the twins. They awoke from their comas to see their brother standing over them, and, recognizing that he was in pain, attempted to help him. The twins rejoined into their M form and then grabbed hold of their brother and joined with him also, forming an amalgamated being calling itself M-Plate. This form had aspects of both forms, but also displayed new powers and new malevolent plans.[9]

M-Plate traveled to a place on the edge of Time called the Citadel of the Universal Amalgamator, which was a weapon of vast power that could merge every individual consciousness into a giant "godhead". Wishing to control every conscious being, M-Plate set to use the weapon, but failed in her/his attempts. The being was split apart when the mutant rat Dirtnap swallowed her/him and began to digest him/her. The digestion process forced the three beings to separate and attempt to escape (individually and in pairs). The stress of the escape attempt caused Dirtnap to explode but also freed the girls from their brother's evil influence.[10]

Desperate to re-capture Penance in order to be able to feed, a weakened Emplate attempted to attack Generation X once more. In an unexpected move, he attacked the team head on, despite being weakened, managing to hold his own against them using Iceman's powers while his henchmen attempted to capture Penance. He failed in his attempt however, and was knocked out and captured.[11]

His father, Cartier St. Croix, came to the school in order to visit his son, now regretting driving his son away and wanting to make amends. Emplate bitterly rejected his father's attempts at reconciliation however, telling him that his son Marius was dead, and told him how he had killed his mother.[1]

At some point, it appears that Emplate was able to escape.[5]

Devil at the Crossroads

Emplate resurfaced after the X-Men relocated to Utopia off the coast of San Francisco. He first attacked Madison Jeffries, but was interrupted by Cyclops and the X-Men. Fleeing to his pocket dimension, he later returned for Bling! in a bid to find a staple victim to replace Penance but was ultimately defeated by Rogue.[5][12]

Emplate returned again to find a world that once again had a drastically reduced mutant population, due to the effects of the Terrigen Mist. He set up shop in the Morlock Tunnels and began feeding on mutants there, converting some of them into his servants. He used his servants to send a message to his sister Monet, in order to lure her to the tunnels. When the two were at last reunited, Emplate told her that he didn't want to fight, and asked for her help, believing that the two of them needed each other.[13]

Monet wasn't interested in helping her brother, who had traumatized her for so long, choosing instead to distract him long enough for him to be pulled to his dimension. This didn't go according to plan, however, as Marius managed to partially merge with Monet at the last second, cursing her with his hunger.[14]

During the war between the Inhumans and the X-Men, M was now completely driven by an urge to kill due to Emplate's influence and began slaughtering the Inhumans, blaming them for the Terrigen Mists and the death of Madrox. Sabretooth tried to stop her, but, seeing she couldn't be reasoned with, let her kill the last Inhuman to keep her secret safe. He then ran away with M to help cure her condition.[15][16]

At some point, Victor left Monet,[17] and she settled down in an abandoned subway car beneath Central Park. With her control over Emplate's manipulation running lower and lower, she made D.O.A. regularly bring her Morlocks for them to feed on, but Emplate argued they needed "mutant marrow of substance" to sustain them, to which M replied she was putting a plan in motion.[18] M did follow on her word and attacked the Xavier Institute, having unsynched the school and its students with reality.[19]

After fighting and deafeating a great percentage of the school's students and staff, M was tricked by Hindsight into absorbing his ability to see the past of whomever he touched. Every time Monet touched someone, her link with Emplate would weaken, so Bling! yelled for everyone to grab M-Plate, which flooded Monet's mind and made her lose composure, finally separating her from Marius, who weakly faded away to his own dimension.[20]

Emplate was eventually welcomed to the new mutant island of Krakoa, created by Xavier, Magneto, and Moira X. He entered through the teleportation gateway alongside other villainous and fractious mutants, who had been invited to join the nation in order to heal mutantdom and start over as a whole species together.[21]

Marius was later tasked, alongside Selene, by Xavier with measuring the amount of psychic energy that Krakoa would take from its inhabitants. A similar protocol was put in place for him as he also needed to nourish on mutants for survival.[22]

Energy Siphoning: He has the ability to siphon mutant energy from the bone marrow of mutants, by way of the feeder mouths on his hands. If he siphons a person’s entire energy force from him or her, the victim dies. It is unknown how often Emplate must siphon energy force from another mutant to survive. When feeding from a victim he cancels out their powers. He is also capable of using the powers he has siphoned, in doing so he takes on some of their attributes. After multiple feedings he gains the power permanently.

Psionic Detection: He has the ability to know various details about a mutants powers and their surface thoughts and memories. This ability also makes him an excellent tracker allowing him to locate individuals by innate knowledge and seeing their psionic aura.

Dimensional Shifting: He has the ability to shift a slightly outside of this dimension, into the space between dimensions. This gives him invisibility and phasing power on a somewhat limited scale.

Extra-dimensional Teleportation: Lack of feeding transports him to an extra-dimension. Though this dimension is a place of extreme torture to him, only when he has fed is he capable of escaping the pull of the dimension, but when he has not he is automatically transported here and subject to abuse that brings him to near death.(it is due to this torture that Emplate cannot survive without the use of his respirator).

Like this? Let us know!
Retrieved from "https://marvel.fandom.com/wiki/Marius_St._Croix_(Earth-616)?oldid=6119284"
Community content is available under CC-BY-SA unless otherwise noted.