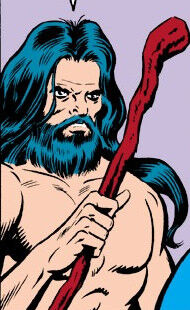 While they were trapped in the crack, Brother Nature opened up to The Captain, saying he had been a park ranger who became an eco-terrorist to stop developers who were destroying the forest. He said the developers' men attacked him and left him for dead, but he claimed he was awoken by the Earth goddess Gaea, who he said gave him his powers and charged him with the task of protecting the Earth.

The Captain climbed out of the crevasse, taking Brother Nature with him, but Brother Nature was distraught when he saw the damage he himself had done to the forest. He was presumably arrested for eco-terrorism.[1]

After the Civil War, he was listed as a potential recruit for the Initiative,[2] but was later hunted by the Thunderbolts when he refused to register as part of the Superhuman Registration Act. He fought the team to a standstill until Radioactive Man tricked Brother Nature into surrendering by claiming his containment suit was leaking radiation that would damage Brother Nature's forest. He was taken into custody, but still refused to surrender.[3]

Brother Nature has the ability to control various aspects of nature.

Like this? Let us know!
Retrieved from "https://marvel.fandom.com/wiki/Mark_Diering_(Earth-616)?oldid=6105675"
Community content is available under CC-BY-SA unless otherwise noted.