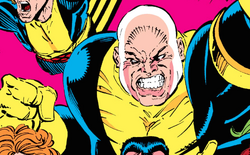 After the Marauders' massacre of the Morlocks, Sunder emerged as one of the few survivors.[3] Some time afterwards, he relocated to Muir Island, appearing enjoying his time with Danny (Legion) and some Warpies children. During the Reavers' attack on the island, Sunder was shot by Pretty Boy and died.[4]

Superhuman Strength: Sunder possessed great superhuman strength. At his peak, he was capable of lifting about 70 tons.

Superhuman Stamina: Sunder's superhumanly enhanced musculature was much more efficient than that of a normal human. His muscles produced considerably less fatigue toxins during physical activity. At his peak, he could exert himself for up to 24 hours before the build up of fatigue toxins in his blood began to impair him.

Superhuman Durability: Sunder was tougher and much more resistant to physical injury than a normal human. He could withstand great impact forces, falls from great heights, exposure to high temperatures, and small caliber bullets without sustaining injury.

Although he had little formal training, Sunder was a formidable hand to hand combatant. He primarily used street fighting techniques that allowed him to make full use of his strength.

Like this? Let us know!
Retrieved from "https://marvel.fandom.com/wiki/Mark_Hallett_(Earth-616)?oldid=5073740"
Community content is available under CC-BY-SA unless otherwise noted.