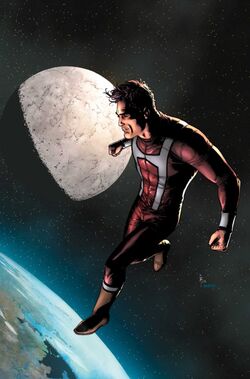 Hyperion was sent to Earth as a baby and raised by agents of the United States government in a secret government compound by a pseudo-family, under the auspices of a normal childhood, with the name Mark Milton. His powers begin developing early. He, and the scientists observing him, discover that he has vast superhuman strength, resistance to injury, and speed. At the age of five, his "flash vision" manifested killing a puppy hand selected for him by his captors. Later he discovered that through intense concentration, he could see through solid objects, that his senses were hundreds of times more acute than that of an ordinary human, and that he could fly at faster than escape velocity. Government agents begin to manipulate him into becoming a weapon for the U.S. government, regardless of his own desires. As a young man, in lieu of Washington Herald reporter Jason Scott's investigation into strange stories involving military operations, he is revealed to humanity by the government as a hero and government operative, dubbed Hyperion.

As Hyperion began to question his role, the government faked the death of his foster parents to increase Mark's dependence on them. Hyperion was blamed for acts of pro-American violence. Seeking to clear his name, he tracked down the culprit, who turned out to be Colonel Joe Ledger, better known as Doctor Spectrum. The two fought a long and devastating battle in which Hyperion accidentally touched Spectrum's power crystal, which came from Mark's ship. As a result, he received memories of his journey to Earth.

Mark began to seek out proof of his origin hidden by the government. He confronted the commander of the project that raised him, and he learned about his life. The project manager activated a self-destruct sequence that created an immense shockwave provided by 20 "daisy-cutter" bombs. Hyperion barely survived and was saved by the insane Zarda, who nursed him and explained they were of the same origin and had been sent to Earth to dominate it.

Hyperion re-emerged, and along with Nighthawk and the Blur, captured serial killer Michael Redstone who was transformed by the government from a strand of mutagenic DNA found on the spaceship that brought Hyperion to Earth. As a result of the government's actions in the empowerment of Redstone and in his upbringing, Mark decided he was outside the system. General Alexander, who is in charge of the government's superhumans, asked Hyperion to work with them again, but he refused.

The government retaliated by revealing to the media that Hyperion was an extraterrestrial. The American people, who had once embraced Hyperion as a hero, became terrified of him. Feared by what he used to believe was his fellow man and disgusted with the government's actions, Mark sent Alexander an ultimatum, punctuated by an extraordinary show of force: stop interfering with him; the human race was to now play by his rules. If the government would not fix the damage they had done to his reputation, then there would be consequences for both the government and the people of America.

The government sent a strikeforce after Hyperion consisting of super genius Emil Burbank, the reality altering Arcanna Jones, the radioactive Nuke, and the superhumanly durable Shape. Becoming embroiled in a conflict with the government's strike team, Hyperion and the other four superhumans were transported to an alternate timeline where the United States had turned into a superhuman dictatorship ruled by Hyperion. Hyperion met his alternate reality counterpart who revealed that his Earth was not an alternate reality, but two years in the future from the home reality. Hyperion returned to the present, but not before the alternate Hyperion told his past self how he implemented his regime.

The Squadron Supreme confronted Earth-616's Cabal during an Incursion and perished in combat right before their Earth was destroyed by the Cabal, so theirs could live.[2]

Unlike his mainstream counterpart, Mark was raised in All-American conditions by the Government, leading him to be patriotic and obedient to the government’s orders. From a young age, he was curious and interested in how the outside works. Yet his isolation from his peers led him to feel lonely and sad, slowly putting him back to the governments control. After awhile of acting as the government's pawn, he slowly grew tired of the pressure and shown a more individualistic mindset. After the reveal of his alien heritage and the government’s, he grew more misanthropic and detached to the human race. It grew to the point of refusing to follow human customs, and acting cold to others until seeing his future led him to reject this attitude. He is kind, loyal, and respectable, although more petty and short-tempered in comparison to his 712 counterpart. He has a strong friendship with Blur, and a give or take relationship with Nighthawk (although it’s unstable and likely to split off at any moment).

Hyperion is capable of lifting well over 100 tons.

Like this? Let us know!
Retrieved from "https://marvel.fandom.com/wiki/Mark_Milton_(Earth-31916)?oldid=5713473"
Community content is available under CC-BY-SA unless otherwise noted.