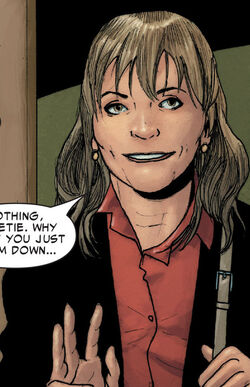 Her father was a good friend of J. Jonah Jameson and she worked as an electro-biologist at Empire State University. She first met Jameson when he visited her to offer her a little business proposition which would help him destroy Spider-Man [1]. Jonah used his money to help her create the fifth version in the Spider-Slayer series. The Spider-Slayer battled Spider-Man at the Rockefeller Ice Skating Rink but was defeated and crushed by a statue of Prometheus.

Jonah and Marla hit it off almost instantly (even if she did not like his cigars) and soon they were making plans to get married. Near their wedding day, she was kidnapped by a revenge-seeking Scorpion, but she was saved by Spider-Man. At the same time, there was tension between Jonah and his son over his marrying Marla, but they solved the issue [2].

She traveled down to New Orleans with J. Jonah Jameson, Mattie and Mattie's friend Cheryl Lansing where they encountered Werewolf Nuns.[3]

Martha's friend Cheryl was scratched by a werewolf, though nothing has been heard of her fate since.

When her niece Martha disappeared she and J. Jonah Jameson sought help from the private investigator Jessica Jones. Jones eventually found Martha being harvested as a new super powered drug but rescued her.[4] After this episode Marla took Martha to see Jessica Jones to thank her for helping her. At the same time Marla said to Jessica that her husband's offer to work for the Daily Bugle still stood.[5]

When She-Hulk married John Jameson, the Jameson's invited their new daughter-in-law over for dinner. At dinner J. Jonah Jameson attacked She-Hulk with a She-Hulk Slayer, but after some words in the attic the two came down as firm friends [6].

Jonah suffered a cardiac arrest, bought on by Peter Parker, and was sent to Mt Sinai Hospital. While at Hospital Marla used the power of attorney to sell their shares in the Daily Bugle. [7]

She sold their shares to Dexter Bennett who on the takeover of the Daily Bugle immediately turned it into "The DB".

She has also updated her style somewhat and started wearing contact lenses. In addition, her husband was elected as the Mayor of New York City.[8] Eventually sometime after the DB's destruction, she was able to buy back the Daily Bugle shares from Dexter Bennett, allowing for the Front Line to be remade into the new Daily Bugle. During Alistaire Smythe's assault, Marla was killed by Smythe while shoving Jonah Jameson out of the way of his attack. Her last words to Jonah are "Don't waste any more of your life on hate... I love..." Jonah held her in his arms and blamed himself for her death, rather than Spider-Man for once [9].

A couple of years later, the Jackal brought Marla back to life in order to get Jameson on his side.[10] She later died due to the Carrion Virus in her bloodstream.[11]

Her corpse, along with others, was eventually dug up by Kindred in order to torment Spider-Man.[12]

Like this? Let us know!
Retrieved from "https://marvel.fandom.com/wiki/Marla_Madison_(Earth-616)?oldid=6424647"
Community content is available under CC-BY-SA unless otherwise noted.