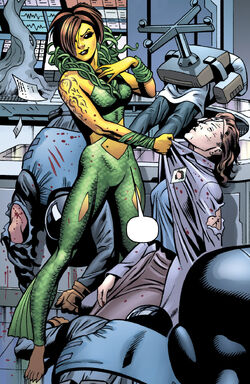 Marrina sleeps a false death under the waves.

Marrina is from an alien species known as Plodex. Her egg was found by Tom Smallwood, a fisherman in Newfoundland, Canada who gave it to his wife Gladys. When Gladys broke the shell she imprinted Marrina with Human female DNA. Marrina grew up mostly normal, except for her odd appearance. She eventually came to the attention of James Hudson.[5]

Marrina joined Department H when she was approximately 16 and was the first member of Gamma Flight. She quickly rose to Beta Flight and by the time that Department H's funding was cut she was ready to become a member of Alpha Flight. When Alpha became independent, she joined the team as an active member. She fell under the manipulations of the Master of the World and learned much of her history. She left Alpha Flight to explore a relationship with Namor.[6]

The Collector kidnapped Marrina for his Plodex collection. The Collector scanned the world for other unique specimens and finds Spider-Man and takes him as well using a Genie. He also used a giant snake called Snake-Eyes using its hypnotic powers. He controlled him using a Kymellian flute. The two heroes however escaped but in the process they released Snake-Eyes who was now loose on the planet.[7]

She and Namor eventually fell in love and married after being a pawn in Atlantean politics and destroying her mate, a monster whose sole intention was to take over the world.[8][9] She later accompanied Namor when he returned to active membership with the Avengers, and became an associate member herself.[10] They conceived children together, but she soon underwent a strange transformation, becoming Leviathan and attacking the Avengers. Namor had to slay her with the Black Knight's Ebony Blade.[2]

However, Llan the Sorcerer told the Master of the World that Marrina was sleeping a false death under the sea. The Master eventually found her body and kept her prisoner in one of his bases, held in a stasis tube.[11]

Marrina resurfaced in Norman Osborn's custody, and he used her as an endgame plan against Namor, who had recently betrayed him and allied with the X-Men. Osborn had her D.N.A. spliced and modified, making her a leviathan/snake-like being, driven by a hunger that could only be satiated with Atlantean blood. Once released, Marrina wrought havoc on the undersea kingdom, injuring many and killing even more.[3]

Namor and the X-Men devised a plan: using Magik and Pixie's powers of teleportation, they transported all of the Atlanteans across the globe, leaving Namor as the sole bait in the hemisphere. Once Marrina approached the X-Men's new base, Utopia, Namor realized who she was. The Stepford Cuckoos scanned her mind, revealing that there was nothing but rage, hunger, and hate. Having no choice, they engaged her. Eventually Namor dragged a weakened Marrina underwater where he performed a mercy killing, ending Marrina's life.[3]

Marrina later returned to life during the attack by the Chaos King. She was accompanied by her old Alpha Flight team.[12]

Since her return, she has rejoined Alpha Flight, but she seems different--angrier and more of a loner.[13]

Leviathan: When Marrina's Plodex instincts took hold, she became savage and homicidal. Her hands transformed into talons that could cut through steel. After Marrina became pregnant with Namor's child, her Plodex genetics caused her to transform into a massive sea serpent over a mile in length, akin to the legendary Leviathan. It shot beams of kinetic energy from its eyes, and laid thousand of Plodex eggs, using its own devastation to "build a nest".[2]

Later, she was kept under estrus and added shark DNA to make her look for Atlantean blood over and over.[3]

Marrina once wore a locket on a chain, which housed her Alpha Flight signal device.[citation needed]

Like this? Let us know!
Retrieved from "https://marvel.fandom.com/wiki/Marrina_Smallwood_(Earth-616)?oldid=5862944"
Community content is available under CC-BY-SA unless otherwise noted.