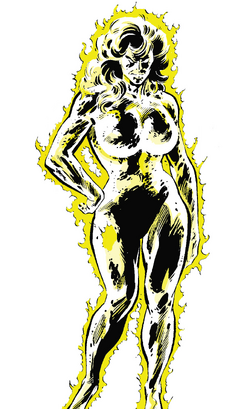 Marsha Rosenberg was born and raised in a suburb of Denver, Colorado, growing up as someone looked down upon by most of her peers as she was overweight and socially awkward. Her only real friend was the similarly outcast Mary "Skeeter" MacPherran, who was similarly unpopular, in her case for being scrawny and from a poor background. The two girls were consistently mocked and humiliated since childhood by the wealthy and popular Vanessa Ashwood and her social clique, and both worked as lowly salesgirls to make ends meet.[1]

When the superhero known as the second Spider-Woman began to make appearances in Denver, Rosenberg remarked that her hair was the same color as Mary's. Mary falsely confided in her friend that she was secretly Spider-Woman, and when Rosenberg spread the rumor, Mary saw her popularity grow and the two found themselves invited to a party by Vanessa and her clique.[1]

In the midst of the party, their suburb of Denver was ripped from Earth and used by the alien Beyonder to create the makeshift planet Battleworld. When the real Spider-Woman arrived on the scene and saved the guests from being crushed by falling debris, Vanessa and her friends realized they'd been duped and chased MacPherran and Rosenberg into the forests of Battleworld. Frightened and exhausted, the two young women were found by the villain Doctor Doom. Doom was looking for recruits for his army of supervillains to battle the team of superheroes who had also been assembled on the planet, and offered the girls the chance of gaining superhuman powers. The girls accepted Doom's offer.[1]

Using the energies of a fierce alien storm, Doctor Doom genetically altered both women to give them powers; Rosenberg became the fiery Volcana. She joined MacPherran (who had become the superhumanly strong Titania) and the other villains in battling the heroes, and Volcana soon beat the She-Hulk in battle.[2]

She soon developed a romance with her fellow villain Owen Reece, the Molecule Man, who like her was rather socially awkward, and became very protective of him.[3] When Reece was grievously injured in battle with the X-Men, Marsha unwisely made a deal with the sorceress Enchantress to be transported to Reece's side, in return for whatever the Enchantress wanted.[4]

After the villains had spent some time on the planet, the Molecule Man decided to use his powers to take the fragment of Denver back to Earth. However, the Enchantress didn't trust Reece's abilities to get her home and, having learned of Doom's theft of the Beyonder's power and his plans to invade Mephisto's Realm and rescue his mother, she decided to call in Rosenberg's debt to her, intending to use Rosenberg's life force to power a spell to take herself home in time to warn Asgard, fearing that Doom would set his sights there after conquering Mephisto's Realm. However, the Enchantress was prevented from draining Rosenberg's life force by Reece and the Lizard, who had grown fond of Rosenberg as she had treated him kindly.[5]

Reece successfully transported the Denver suburb and its inhabitants including the villains back to Earth, and Rosenberg and Reece stayed together as lovers, living quietly in the city. However their relationship eventually broke down when Rosenberg decided she couldn't tolerate Reece's bloodthirsty and egomaniacal personality change since their return to Earth, and they have since separated.[6]

Unlike her friend, Titania, who became a full time super-villainess after the Secret Wars, Volcana has done superheroic deeds, such as fighting Moonstone and Wizard. Volcana also teamed up with The Fantastic Four to free the Molecule Man from a Cosmic Cube along with the Beyonder, and assisted the Avengers in repairing the Earth's crust from damage caused by the Beyonder.[7]

Volcana later presumably turned to super-villainy for hire as she was hired along with Titania by former hero, Nightwatch, to keep She-Hulk away from documents that incriminated Nightwatch as a murderer. They both attacked She-Hulk but were defeated by her and Hellcat and left incapacitated.[8]

Volcana has the ability to transform her body into three separate volcanic forms: Plasma, Stone (basalt) and Ash (pumice).

Retrieved from "https://marvel.fandom.com/wiki/Marsha_Rosenberg_(Earth-616)?oldid=5665906"
Community content is available under CC-BY-SA unless otherwise noted.