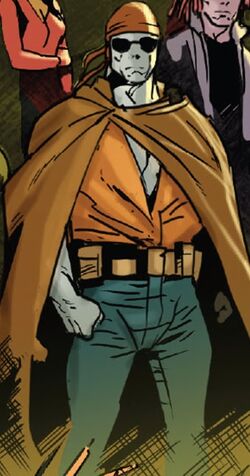 I'm not big on the thinking. I'm mainly good for the punching and the ripping things apart.

When his mutant nature manifested, Marshall sought aid in controlling his body's now-protoplasmic state. Help came in the form of the Dark Beast, who gave Stone control in exchange for his services as a superhuman operative for X-Factor. Though still only a young boy, Stone used his powers to make himself appear larger and older, becoming the bounty hunter Random.

As a bounty hunter, he took down a mutant suspect, a serial killer, and Speed Demon, but didn't kill any of them.

He established himself in Albany with a housekeeper and mother-figure Vera.[1]

At some point a thief, he killed Charlie Ronalds's parents Harry and Robin while the family was leaving a screening of the 1966 Batman movie. Charlie Ronalds grew up with a hatred for mutants.[2]

He developed a crush on Polaris and confided in her his real name.

Stone often worked with the government-sponsored team X-Factor until the Dark Beast had him betray them by capturing their leader, Havok. Stone later aided Havok against the Dark Beast, freeing himself from servitude.

He also later freed Feral too, and helped the Acolytes fight Quicksilver.[3]

He briefly joined Magneto's mutant army in Genosha, forming a pair with the Blob, and both were taken down by Scott Summers.[4]

He was then somehow captured by the Weapon X program and incarcerated in the "Neverland" concentration camp. On the first day, when guards began separating the mutants, he and Diamond Lil tried to resist, but were beat up by the Boxbots guards, while their powers were negated by a dampening field erected by an enslaved Leech.[5]

When the majority of Neverland's residents were massacred by the mesmerized Agent Zero, Random was one of the survivors considered still useful by the Weapon X Program.[6]

He relocated to Utopia, and joined the fight against Nimrod Sentinels.[9] After that, Random helped with the cleanup,[10] and coincidentally helped fight Omega Sentinel when she went haywire.[11]

Some time following the conflict between the Avengers against the X-Men, after which Utopia was abandoned, Random formed part of the Utopians, a group of mutants that started inhabiting the island.[12]

The X-Men were sought out by S.H.I.E.L.D. to investigate the island after a recon team went missing. The X-Men teleported to the island, and initially engaged the Utopians. After talking it out and discovering the Utopians wanted nothing but to be safe and undisturbed, the X-Men offered them a place at the New Charles Xavier School, which they gladly accepted.[13]

Random was eventually welcomed to the new mutant island of Krakoa, created by Xavier, Magneto, and Moira X. He entered through the teleportation gateway alongside other villainous and fractious mutants, who had been invited to join the nation in order to heal mutantdom and start over as a whole species together.[14]

Random Mutant-Power Adaptation: Random is a mutant with the ability to automatically counter other mutant powers randomly. He is able to generate a defense against rust and magnetism, can produce a high-pitched whistle against Wolfsbane, generated a counter-wind against Pirouette, deployed a counter-magnetic force against Polaris, and proved resistant against Havok's plasma energy.

Malleable Protoplasm Body: His entire body is composed of a malleable protoplasmic substance, which, with the aid of Dark Beast, stabilized in the form of a human teenager. He can assume a gelatinous state through which holes can be cast by narrow or collapse into a shapeless mass.

Like this? Let us know!
Retrieved from "https://marvel.fandom.com/wiki/Marshall_Stone_III_(Earth-616)?oldid=5831750"
Community content is available under CC-BY-SA unless otherwise noted.