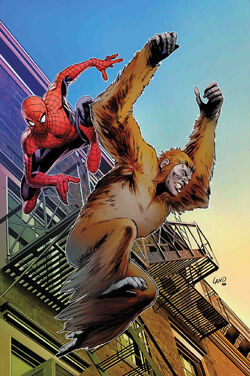 Martin Blank was a mutant[3] whose simian features earned him mockery and contempt growing up at an orphanage. He would be the happiest when the orphanage took him and the other kids to the zoo. When Martin was old enough, he was let go since nobody ever tried to adopt him. Martin wished to get away from society and live in Africa, but he didn't have the money. Ruling out the possibility of an ordinary job, he sought out a circus to put his acrobatic agility and strength to use. He was provided a fur costume to enhance his animal appearance, but the circus owner didn't want him outshining other performers, so he had Martin engage the audience like a clown. Martin was further tormented by the laughs of the public, and left after only one week. He moved to Manhattan, where he ended up living in a flophouse.[4]

Martin jumped around a specific rooftop to unwind regularly,[5] and in a fateful day he encountered Spider-Man, and saved his camera after the wall-crawler tossed it away in a fit of frustration. They exchanged a few words, and Spider-Man tried to cheer him up.[4] Martin became obsessed with Spider-Man, sensing familiarity with him due to his acrobatic skills.[5] The following day, Martin decided to put on his circus costume and intercept Spider-Man to offer him to become partners, adopting the alias of the Gibbon. However, Spider-Man laughed at the idea, causing Martin to lash out at him, unwittingly driving Spider-Man away after attacking him.[4]

Spider-Man's enemy, Kraven the Hunter, was planning his revenge on the web-slinger when he witnessed his brief encounter with Martin. Kraven approached Gibbon and convinced him to join him in his quest against Spider-Man, which Martin decided to use as an opportunity to show the hero and the world not to make fun of him. Kraven trained Gibbon and provided him with a herb broth that enhanced his powers, giving him the appearance that his costume mimicked. Martin was also consumed by an animal rage, and attacked Kraven. However, Kraven managed to fend him off and hypnotized Martin to become subservient. Kraven sent Gibbon after Spider-Man, and Martin almost killed him, but managed to snap out of Kraven's control, holding out to his humanity. Gibbon lost consciousness as a result, and Spider-Man saved him after falling off a rooftop.[6] Spider-Man had a hunch that Gibbon was being manipulated, and carried him to a hospital. After leaving him, Spider-Man told a nurse to tell Martin he had no hard feelings.[7]

Later, Gibbon sought revenge on Spider-Man, trying to prove himself as good as his foe. He was caught in the middle of a fight with Spider-Man and the Beetle. Eventually Gibbon helped Spider-Man by punching out the Beetle. Gibbon later joined up with other "has-beens" the Kangaroo, Grizzly and the Spot to form the Spider-Man Revenge Squad (also known as the Legion Of Losers). This team fell apart when Spider-Man carted the Spot and the Kangaroo to jail for bank robbery.[8] He and the Grizzly later attempted to go hero, helping Spider-Man thwart a bank robbery by the White Rabbit[9] and eventually getting an action figure deal.[10]

During the Civil War, Stilt-Man was killed by the Punisher. Gibbon attended his funeral along with many others criminals, and they were all drugged by the Punisher, using the guise of a bartender, who then blew up the bar with the criminals still inside.[2] Disfigured from his burns and looking almost as a normal human, Gibbon married the blinded widow of Stilt-Man, Princess Python, and participated on a regular basis at The Survivors Guild meetings for those who escaped from the bombing and other attempts on their life by the Punisher. He tried to take revenge on Castle, but ultimately gave up.[1] After she recovered from her injuries, Princess Python grew bored of Martin and eventually left him for Live Wire.[5]

Gibbon volunteered to undergo scientific experimentation at State University. He met Doctor Fiona Fitzhugh, an independent research whiz who put the Gibbon through a battery of tests in order to develop a better understanding of his mutation. An accident in the laboratory opened up a dimensional rift, and Fitzhugh and Martin were transported to the alternate Earth of Reality-8101, a world dominated by apes. This world was very similar to Earth and included simian counterparts to known heroes such as the Avengers and the Fantastic Four.[11]

At some point in time, Martin returned to his native universe. He tried to keep his head low, but was one of the many animal-themed criminals captured by Taskmaster and Black Ant for Kraven the Hunter's Great Hunt in Central Park, where hordes of Hunterbots were set loose to hunt down the event's unwilling participants.[12] Early in the event, Spider-Man tried to convince Martin to stay by his side. However, when the Vulture approached him, Martin accepted to go with him, hoping he would then cross paths with either Princess Python or Grizzly, both of whom were also trapped in the Great Hunt. However, the Vulture quickly injured Gibbon and left him behind in order to shake off a group of Hunterbots that were chasing both of them.[13] Martin attempted to hide, but was progressively hurt by more Hunterbots. Ultimately, a pair of hunters stumbled into Gibbon and shot him to put him out of his misery. Spider-Man found Gibbon dying, and cradled him. While he couldn't find the strength to say his final words, Martin found comfort in the silence of the moment, since it meant nobody was laughing at him.[5]

Martin was a mutant whose Mutant Biology caused him to have a radically different physiology from a normal human;

Like this? Let us know!
Retrieved from "https://marvel.fandom.com/wiki/Martin_Blank_(Earth-616)?oldid=6105503"
Community content is available under CC-BY-SA unless otherwise noted.