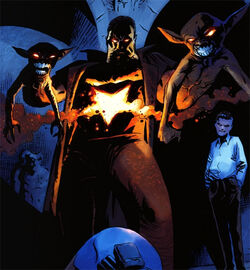 Your past -- your history -- is darkness and chaos. Whatever your present, Pandemonium's advice is -- embrace it.

A student of Juilliard School,[2] Martin Preston was a successful Hollywood star, enjoying all the perks his wealth, status and fame brought him. He was contracted with Anvil Studios.[3] and got top billing in B-movies including The Two-Gun Kid meets Dracula.[2] Though in his early fifties, he didn't look a day over forty, contributing to his success and 27-year long career in the silver screen. However, one day, while driving his Jaguar too fast and drinking too much he crashed his car down a ravine.[3]

He was approached by the mystical entity, Mephisto, and pleaded for his help. Mephisto called forth a demon, shaping it into Preston's arm, and attached it to his body. Not wanting to stop there, Mephisto severed the rest of his limbs, similarly replacing them with demon-shaped replicas. Preston was ready to get back to acting but discovered a five-pointed star-shaped hole in his chest. Mephisto then lied, claiming he had separated Preston's "soul" into five pieces, scattering them into different places among Earth's dimensions.[4] Actually, Mephisto, who only managed to reconstitute a fraction of himself after being bodily and mentally dispersed by Franklin Richards, still needed to search out for five remaining fractions of his being and planned on using Pandemonium as a pawn.[5]

Pandemonium soon clashed with the Avengers West Coast branch and their erstwhile allies, the Rangers, who had just discovered that Ranger member, Shooting Star, was actually a demon. Pandemonium believed that the demon Star would know of the soul fraction he was searching for, but he soon retreated when she was of no help.[3]

Keeping tabs on the Avengers, who were also investigating him, Pandemonium followed the Avengers when, with allies Hellstorm and Hellcat, visited the dimension of the Cat People when trying to help teammate Tigra. The Cat People were actually a type of demon and possessed a soul fragment that Pandemonium needed. They tried to force Tigra to kill Pandemonium in cold blood, but she refused. Pandemonium soon restored the soul fragment to the star in his chest and left for nearby dimensions to continue his search.[6]

Much later, Pandemonium confronted the West Coast Avengers again, claiming that the twin sons of the Scarlet Witch were actually soul fragments transformed into her sons by the Witch's spell/hex combination she used to allow herself to become pregnant. He clashed with the Avengers but managed to destroy the twins to revive part of himself anyway. Agatha Harkness and the original Human Torch somehow retrieved the remaining two soul fragments Pandemonium needed, and once in place, Pandemonium disappeared, to be replaced by Mephisto. The demon revealed the truth about his plot, seemingly destroying Pandemonium while fully reconstituting himself. The Avengers soon escaped from Mephisto's presence.[7]

While searching for the Scarlet Witch, Wiccan and Speed came across Master Pandemonium squatting in the home that she and Vision had shared in Cresskill, New Jersey while raising their twin sons. Pandemonium is shocked that the twins still exist and relates to them the story of how Mephisto's reclaiming of the twins required that the Scarlet Witch's memory of the twins be erased. He has been in hiding ever since and advises the boys that their past is only darkness and chaos and they should focus on the present.[8]

Master Pandemonium's four limbs are missing, having been replaced by demons. Upon command, he can separate any or all limbs into their demonic beings. He can also call forth hordes of other demons, all following his commands. These minor demons are usually short and spiky in nature, much like goblins and their ilk. They do not seem to possess any special powers or abilities beyond their claws and fangs, and in some cases, wings.[9]

Pandemonium also commands (or perhaps is overseen by) Azmodeus, a demon in the shape of a human-sized red eagle. Azmodeus can be called forth from Pandemonium's pendant around his neck and acts as reconnaissance and support (literally, in the case of separating all his limbs).[9]

Like this? Let us know!
Retrieved from "https://marvel.fandom.com/wiki/Martin_Preston_(Earth-616)?oldid=6104778"
Community content is available under CC-BY-SA unless otherwise noted.