"Now is Not the End" 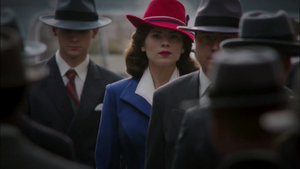 Episode Title
"Now is Not the End"

Appearing in "Now is Not the End"

Synopsis for "Now is Not the End"

Peggy Carter reminisces about her time with Captain America before heading to her job at the SSR's offices in New York City. Her boss, Roger Dooley, and several other agents at the office are dismissive of Agent Carter's abilities because she is a woman. Chief Dooley puts Agent Jack Thompson in charge of a manhunt for Howard Stark, who failed to appear at a senate hearing over the possible sale of his inventions to enemies of the United States. Agent Carter tries to defend her ally from the war to the other agents, but is shot down. Only one agent, Daniel Sousa, sympathizes with Agent Carter and defends her from the others. Later that night, Peggy goes to eat at a diner and finds a message written on her napkin telling her to go out into the alley. Once outside, she is approached by a mysterious British man, and Agent Carter instinctively defends herself from him. A car pulls between Agent Carter and the man, and window rolls down to reveal none other than Howard Stark. Peggy gets into the car within, and reveals the man she attacked is his butler, Edwin Jarvis. He then lets her know the dangerous devices of his on the black market, his "Big Baddies" were stolen from his vault, where they were locked away so no one would ever get their hands om them. Stark wants Peggy to find those devices and clear his name.

The next day, Agent Carter tries to get a lead on a fence who could be selling Stark's devices. She hears around the office that the SSR is suspicious of Spider Raymond, a club owner and gangster, and that they will be inspecting the club later. Agent Carter goes there on her own disguised as a Blonde American woman. She puts on a special lipstick that contains a chemical that knocks people out and gets into Spider Raymond's office by sweet-talking his guards. She starts to seduce Spider Raymond, who goes in for a kiss when one of his guards barges into the room. The guard leaves, but Agent Carter's lipstick has already knocked out the gangster. She looks inside his vault, and discovers one of Stark's big baddies inside - a small, glowing ball. Peggy calls Jarvis, whose services Stark lent to Agent Carter for her investigation, and he tells her the item is Nitramene, a substance that emits Vita-Rays to create explosions with a blast radius of 500 yards. Peggy leaves with the Nitramene, dodging they eyes of Agent Thompson and the other SSR agents who have since arrived at the club. On her way out, a man in a green suit goes up to Spider Raymond's office and kills him. She takes it back to her apartment, where her room mate is already in bed with the flu. She grabs various everyday chemicals stored around her apartment and goes into the bathroom to deactivate the Nitramene, but she hears a disturbance in the rest of her apartment. Agent Carter leaves the bathroom and finds her room mate dead with a gunshot wound to the head, and is attacked by the same man who killed Spider Raymond. During the fight, she notices he has a scar across his neck. Peggy throws him out of her apartment window, but when she looks down his body is nowhere to be seen.

Peggy and Jarvis take what is left of the Nitramene to one of Stark's laboratories, where Doctor Anton Vanko takes a look at it. He directs them to a nearby Roxxon facility where the fence may be selling the devices to a new buyer. That night, Carter and Jarvis stake the place out, taking notice of the two heavily armed guards outside. Agent Carter sneaks into the factory and finds a Roxxon scientist talking to someone selling the Nitramene. A radio from Jarvis, who is still outside, alerts the two of them to her presence, and they go after her with guns drawn. Peggy uses a flash to disorient the scientist, but the seller heads to a dairy truck and opens the back to reveal dozens of Nitramene devices. Agent Carter aims her gun at the seller as he picks up one of the devices. He loosens his collar, revealing he has the same scar on his neck as the man who attacked Agent Carter in her apartment, and pulls a device out of his pocket to help him He gives her a warning, "Leviathan is coming," and throws down the device. Peggy hurries out of the factory, and watches its destruction as she and Jarvis speed away.

Back at the SSR offices, Agent Thompson brings Chief Dooley photographs that possibly have the blonde woman seen with Spider Raymond shortly before his death, while Agent Sousa gives them news of the destruction of the Roxxon factory. At the diner, Peggy intimidates a fellow customer being abusive towards a waitress, Angie, Peggy was friendly with. Jarvis watched the whole event outside from his car, and called Howard Stark to tell him she was perfect for what he had planned.

Retrieved from "https://marvel.fandom.com/wiki/Marvel%27s_Agent_Carter_Season_1_1?oldid=5266941"
Community content is available under CC-BY-SA unless otherwise noted.