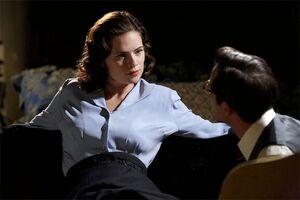 Your desire to help others is noble, but I doubt you'll find much success unless you allow others to help you.

Appearing in "Bridge and Tunnel"

Synopsis for "Bridge and Tunnel"

Peggy Carter is sitting in the diner talking to Angie about finding a new apartment. Angie mentions there might be an opening in her building before Peggy meets with Jarvis, who takes her back to one of Howard Stark's currently unused houses. Stark wants her to live in the house for the time being, but Agent Carter refuses since he connections to a wanted criminal would "put a noose around her neck." Elsewhere, the man in the green suit receives an order from Leviathan to track down the thief, Leet Brannis, leaving a trail of bodies in his wake. Agent Carter meanwhile goes to the dairy plant the seller's truck was from disguised as a health official to look for any leads on the location of the Nitramene. She doesn't find anything there, but the plant's manager lets her know one employee, Sheldon McFee, has been sick for two days and uses his truck to commute. Meanwhile, Chief Dooley, and Agents Thompson and Krzeminski check out the remains of the Roxxon factory - one giant ball of fused metal, wood, and concrete. Dooley thinks Howard Stark is behind the destruction, and takes Thompson with him to Roxxon while leaving behind Krzeminski to pick apart the remains of the factory for clues.

Back at the SSR offices, after getting McFee's address, Peggy starts talking to Agent Sousa when he gets back the developed film that possibly has the blonde woman seen with Spider Raymond, who unknown to the SSR is actually Agent Carter. As Sousa is called away by Krzeminski to pick apart the giant metal ball, Peggy used Dooley's phone on the "No Trace" function to warn Jarvis to ditch the car they used on the mission last night, given that it's bathed in Vita-Rays. She then tries to get the photos out of Sousa's desk when she is called to the Roxxon offices. Roxxon's CEO, Hugh Jones, agrees with Chief Dooley that Stark was behind the attack, and correctly thinks his factory was destroyed by a Nitramene device Stark was previously working on and mentions that Stark tried to purchase the factory some time ago. The Vita-Rays emitted by the device should still be on anyone who was in the factory at the time the device went off, and Chief Dooley wants Agents Carter and Thompson to test Roxxon's employees for them. Before she starts, Agent Carter takes the counter into the bathroom with her, and finds the radiation is strongest on her watch, forcing her to dispose of it. While the employees are being screened for Vita-Rays, Peggy notices the scientist who was in the factory that night. The scientist is cleared, but as he is walking away, Agent Carter asks Hugh Jones if his employees change their clothes when they arrive at work. Because they do, she suggests that they should screen the employees' clothes in the locker rooms rather the employees themselves. Realizing he's been caught, the scientist, Miles Van Ert, starts to run away, and Dooley and Thompson chase after him. Agent Carter, on the other hand, asks where the hallway Van Ert ran down leads to and intercepts Van Ert by attacking him with an employee's briefcase. Now in their custody, Van Ert is taken back to the SSR's office. After he refuses to name any names for Chief Dooley, Agent Thompson starts brutally interrogating him. They manage to get a name out of him - Leet Brannis.

Later that night, Peggy waits at the diner for Jarvis. While she's waiting, Angie shows her a newspaper clipping showing the available room in her building, but takes it personally when Peggy turns down the option, not knowing what happened to Agent Carter's last roommate. Jarvis picks her up, and the two of them head off towards Sheldon McFee's house. Unknown to them, both the SSR and the green suited man are moving in on McFee's location as well. She sneaks inside his house using the noise from McFee's radio as a cover, but he eventually notices she's there and starts fighting her. He's no match for Agent Carter, who easily takes him out. While she's tying him up, she hears a car starting outside, and pulls a man out of McFee's milk truck. It's the same person from the factory, Leet Brannis. Peggy puts a gun to his head, and wants information out of him. Once she offers him protection, he tells her that Leviathan is his former employer, and they tasked him with stealing the Nitramene from Stark's vault. Once Brannis stole the weapons, he decided to double-cross Leviathan and sell them to the highest bidder, making him an enemy of the mysterious organization. In this time, McFee managed to get out of his bonds and ran away, only to be caught by Dooley and Thompson. While driving Brannis back to the SSR, they are ambushed by the green suited man, who jumps off a bridge on to the top of the truck. Agent Carter gets onto the roof to fight him off. A shot through the roof incapacitates Brannis, forcing Jarvis to take control of the car. Eventually, Peggy nails his hand to the roof of the truck with his knife, and tells Jarvis and Brannis to get out of the truck. It drives of the road and falls into the Atlantic, and the dozens of Nitramene devices on board go off at once, resulting in a bright, huge explosion. Unfortunately, Brannis is near death, and uses his final moments to draw a symbol resembling a heart into the dirt. Peggy and Jarvis notice the lights of Thompson's car getting nearer, and erase Brannis' symbol and get out of there. The SSR agents soon arrive on scene and find Brannis' body, as well as a woman's shoeprints, making them assume that she either was with then before he died or killed him. Sousa then finds the green suited man's hotel key.

The next day, Peggy goes to Angie's building to apply for the room. She's nervous about having to interview for a room there, but she meets the strict interviewer's standards. At the office, Thompson, Dooley and Sousa are going over the photos from Spider Raymond's nightclub, only to see that there are no clear pictures of the blond woman, much to Peggy's relief. Meanwhile, Krzeminski finds the license plate to Stark's car in the remains of the Roxxon factory.

Retrieved from "https://marvel.fandom.com/wiki/Marvel%27s_Agent_Carter_Season_1_2?oldid=5266943"
Community content is available under CC-BY-SA unless otherwise noted.