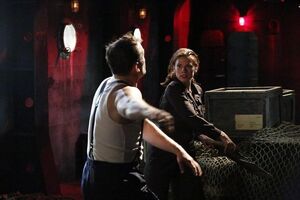 If you wish to clear Mr. Stark's name, you must do so from the shadows.

Appearing in "Time and Tide"

Synopsis for "Time and Tide"

Agent Carter is up late looking through a book of symbols trying to find a meaning for the heart-shaped symbol Leet Brannis scrawled in the dirt before he died when she hears a sound outside her window. A man has scaled the wall and is outside her window. She points a gun in his face and asks what he's doing, to which he replies he's looking for his girlfriend Molly in a different apartment. Meanwhile, Chief Dooley and Agent Krzeminski are looking through the Leviathan assassin's hotel room for any clues to his identity. The next morning, Miriam kicks Molly out of the Griffith for letting a man up to her room. This gives Peggy the idea to look for how Brannis could have smuggled all of Howard Stark's weaponry out of his vault. She goes to meet with Jarvis so they can inspect the area around his vault, but are interrupted by a knock at the door from Agents Thompson and Sousa, who ask him why the bumper of his car was found in the wreckage of the Roxxon factory. Although he claims the car was stolen, they bring Jarvis back to the SSR's main offices to question him on his whereabouts during the blast. Jarvis eases through most of Agent Thompson's questions while Carter, Sousa, and Dooley watch from behind a two-way mirror. However, Jarvis tenses up when Agent Thompson brings up his treason charge and suggests it was Stark's money that had the charge dropped. Peggy recognizes her accomplice is about to crack, and sabotages the interrogation by revealing in front of Jarvis that she "accidentally" took his file on the stolen car report. Jarvis walks out of the office easily, while Dooley takes Peggy and Thompson back into his office and chews her out for botching Thompson's interrogation.

That night, at the Griffith, Angie barges into Peggy's apartment while she's getting ready to go back to Stark's mansion to investigate. Angie tries to get Peggy to open up about her terrible day at work, but Peggy tells her she needs to leave. Insulted, Angie storms out of the apartment and both of them run into their new neighbor, Dottie Underwood. Miriam tries to introduce the two of them to her but they both hastily go back into their rooms. Peggy goes to Stark's mansion, where she tries to get Jarvis to open up about his treason charge. Once they get into the sewers underneath the mansion, he tells her that, while he worked for a general in the British army, he forged the general's signature to get his Jewish future wife out of Nazi-occupied Budapest. Peggy believes Brannis may have used the sewers to smuggle Stark's technology out of the vault as New York City's sewers still work on storm water, meaning Brannis would only need a simple raft to get the stolen goods to New York harbor. They follow the sewers to the harbor and see a nearby docked ship, The Heartbreak, that bears Brannis' symbol on its side. Agent Carter and Jarvis investigate the boat and find more of the stolen weapons on board, including "the Constrictor," which causes involuntary, catastrophic muscle contractions. Peggy wants to turn them over to the SSR, but Jarvis warns her that doing so would do nothing to clear Stark's name and would only put a noose around her neck. Peggy tells Jarvis to disguise his voice and send an anonymous tip to Agent Sousa, the only other SSR agent she could stomach taking credit for the find. While he is gone, Agent Carter is attacked by a large, hulking man who Brannis charged with guarding the boat and its cargo. She uses the Constrictor against him, which breaks his arm and pins him to the ground in pain. They leave before Agents Sousa and Krzeminski can arrive to claim the cargo. Soon, Dooley, Thompson and several other SSR agents have swarmed the boat. Krzeminski leaves with the witness, Zandow, in his car, who complains about his broken arm. Krzeminski gets out of the car when they are rear ended, only for the driver of the other car to get out and kill him and then Zandow.

When Agent Carter arrives at the office the next day she immediately realizes something is wrong, and soon learns what happened to Krzeminski. Chief Dooley leaves his office and blames Howard Stark for what happened. After work, she goes to the diner and tells Angie about her terrible day.

Like this? Let us know!
Retrieved from "https://marvel.fandom.com/wiki/Marvel%27s_Agent_Carter_Season_1_3?oldid=6498093"
Community content is available under CC-BY-SA unless otherwise noted.