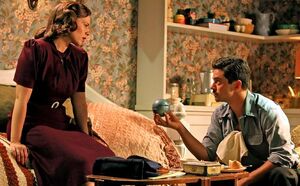 Steve Rogers may not still be with us, but he can still save millions of people.

Appearing in "The Blitzkrieg Button"

Synopsis for "The Blitzkrieg Button"

Howard Stark smuggles himself back into the United States through a smuggler named Otto Mink. Peggy and Jarvis are forced to fight off Mink's goons when they try and extort more money out of them. But as they are transporting Howard to one of his safehouses, Peggy has Jarvis pull over, spotting SSR agents watching the perimeter; the SSR is now more determined to catch Howard, believing him responsible for Ray Krzeminski's death. Therefore, she decides to hide Howard at the Griffith, narrowly avoiding Miriam's watchful eye. Once they are alone, Stark gives Peggy a camera pen and tells her she needs to figure out which of his stolen devices the SSR recovered from the Heartbreak. Meanwhile, Otto Mink plans his revenge on the people that made a fool out of him and executes his two underlings when they confirm that Jarvis and Peggy would lead him to Howard.

The next day, while the other agents make Peggy pick up lunch for everyone while they work on the Howard Stark case. She uses the opportunity to get into the SSR's lab, secretly taking pictures of Stark's devices the whole time. Sousa goes to the docks and finds two homeless men he thinks might have seen the anonymous caller that tipped the SSR off to the Heartbreak. He brings one of them back to the SSR's offices to interrogate him, but Agent Thompson thinks the man is a dead end. Sousa, however, thinks he is withholding information since he consistently says he won't talk to cops rather than tell them he knows nothing. After Sousa's attempts to appeal to their shared histories in the War, Agent Thompson finally gets the witness to talk by offering him food and some whiskey. The homeless man only says that a man and woman boarded the Heartbreak but they were too far to see their faces. Chief Dooley, meanwhile, goes to Germany to speak with the Nazi commander who was at Finow, the battle where both Leet Brannis and Sasha Demidov were officially KIA. The commander, Col. Ernst Mueller, is imprisoned in Nuremburg awaiting his execution. Mueller is at first reluctant to give Dooley any information about Finow, but starts talking after Dooley offers to help him escape. He says there was no battle at Finow; that his platoon found hundreds of Soviet soldiers ripped to pieces.

Peggy takes the camera pen back to her apartment to show the film to Howard Stark. He takes a look at it and (after ripping off a few unrelated pictures at the start) hands it back to Peggy. The SSR has most of his stolen devices, including one he calls "the Blitzkrieg button." Stark built this device during the war to protect London from the Blitz - push the button, and it destroys the electrical grid, causing a city wide-blackout and preventing the enemy planes from seeing their target. However, Stark could never figure out to restore power, and wants Peggy to bring the device back and swap it out with a fake before the SSR can activate it and shut down the tri-state area. Peggy goes back to the office to retrieve it, but doesn't trust Stark and Jarvis are being completely honest with her about what the button does. When she finds it, she presses the button, and it opens to reveal a vial of blood inside. While she's on her way out, she cuts into a room to prevent the other SSR agents from finding her, not realizing Agent Thompson was in that room eating alone. A bit inebriated, he asks Peggy why she's working at the SSR, and tells her she's only hurting herself if she thinks any of the men there will ever think of her as their equal.

She takes the Blitzkrieg button back to her apartment, but before she hands it over she confronts Stark about what he really had her bring back to him. Stark reveals the blood in the vile is Steve Rogers', and Peggy punches him out. Once he gets back up, he tells Peggy he couldn't have the government wasting Rogers' blood and that he could use it to cure diseases, but Peggy is still angry that he would use Captain America's blood for his own personal gain. While they are having this fight, Otto Mink enters the hotel disguised as Peggy's boyfriend, but Miriam won't let him up past the first floor. Having spotted Miriam writing down Peggy's room number, he crawls through the building's vents to get to Peggy's floor, but once he is outside her room her neighbor Dottie leaves her's and asks Otto if he is looking for Peggy. He tells her to back into her room, but once Dottie sees his special automatic pistol, she kills him by jumping on top of him and breaking his neck with her legs. Dottie hides Otto's body under her bed and models with her new weapon in her mirror, while Peggy hammers a hole in her wall for her to hide the vial of Steve Rogers' blood.

Chief Dooley arrives back in New York the next morning. While he is going through his files on Brannis and Demidov, the typewriter he recovered from Demidov's hotel room starts typing on its own.

Retrieved from "https://marvel.fandom.com/wiki/Marvel%27s_Agent_Carter_Season_1_4?oldid=5266948"
Community content is available under CC-BY-SA unless otherwise noted.