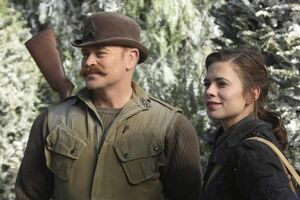 Congratulate the lady. She's on the team.

Appearing in "The Iron Ceiling"

Synopsis for "The Iron Ceiling"

In 1930's Russia, a school of young girls are given a military education. Their instructors have them fight each other, sometimes to the death.

In the 1940's, Dottie, who was one of those young girls, is eating with Peggy at the diner. Peggy gives her advice on how she should experience New York while she's living there before she leaves to meet with Jarvis, but not before Dottie manages to swipe the key to Peggy's apartment off her. Peggy and Jarvis briefly exchange words about Howard Stark betraying her trust over the vial of Steve Rogers' blood, and over the male agents of the SSR ever treating her as an equal. She storms off and heads to the SSR's office, where a cryptographer has been called in from Arlington to break the code left by Demidov's "magical typewriter." The cryptographer fails at being able to translate it, but Peggy does it easily when she accounts for the original message being written in Russian. The message gives geographic coordinates for a location in Belarus, and says Leviathan will purchase a device from Howard Stark. Realizing they finally have evidence linking Howard Stark to treason, Thompson prepares to take a team to Belarus immediately. Peggy, seeing how she is both familiar with the terrain and can speak Russian, wants to go to Belarus as well despite Thompson's objections. Chief Dooley shoots her down, but says she could go if she could get the Howling Commandos to join them. Although Dooley meant this as a joke, Peggy is able to get members of the Howling Commandos to meet them on the Polish side of the Russian border, and Dooley tells her to pack her bags.

Peggy, Thompson, and the two other SSR agents with them drop into Poland, and soon meet up with the Howling Commandos Dum-Dum Dugan, Happy Sam Sawyer, Junior Juniper, and Pinky Pinkerton. That night, while trading war stories, the Howling Commandos goad Agent Thompson into talking about how he got his Navy Cross. While his unit was camped on Tsuken Island, Thompson dozed off while on watch, and awoke to find a Japanese soldier slitting the throat of his commanding officer. Thompson then took up his gun and single-handedly killed all of the Japanese soldiers near their camp before all of his men had woken up. The next morning, they move in the coordinates to find a base. They infiltrate the facility by breaking up into two groups of four. Peggy, Dugan, Juniper, and Agent Li, one of the other SSR agents find, of all things, a school room. They turn on a projector, and Peggy finds subliminal messages about instilling fear hidden in a cartoon. Li, meanwhile, hears a small child crying. They investigate the cries and find a small girl wearing a uniform cowering in a dormitory. Dugan approaches the girl while trying to calm her down, but the moment he turns his head she stabs him, grabs his gun, fires it and runs away. Dugan's vest took most of the damage, but the shot killed Juniper. Hearing the commotion, the rest of the team finds them, but they realize Leviathan is also heading towards them. Peggy has Dugan, Pinky and the other SSR agent go find a back way out of the base while the rest go with her.

Back in the U.S., Dooley leaves Sousa behind at the office. Moments after he leaves, Sousa receives Peggy's file, and uses the information inside to confirm she was the blonde woman at Spider Raymond's nightclub. Dooley, meanwhile, talks to a writer who reported on the War for The New York Times at a bar, and asks him if he knows anything about Howard Stark and Finow. The reporter says Howard Stark got into a fistfight with a general after Finow, and suspects the military might actually be framing Stark for treason. His resolve in Stark's guilt shaken, Dooley catches Jarvis on the street and gives him his contact information, telling him that Stark should feel free to call him to tell him his side of the story. Meanwhile, at the Griffith, Dottie enters Peggy's apartment and starts going through her things. She finds her information on Stark's stolen technology, and starts imitating Peggy in her mirror.

Peggy and her team find a jail cell holding two scientists. One, Nikolai, is a mentally disturbed engineer, while the other, Dr. Ivchenko, is his English-speaking psychologist. Nikolai sees the world differently from everyone else, and would go crazy if not for Dr. Ivchenko. They ask him what Leviathan has them there for, and Dr. Ivchenko says they have Nikolai building devices based on Howard Stark's blueprints, but mentions that Howard Stark has never been there. They break the two scientists out and start making their way toward the exit, but the come under fire from Leviathan soldiers. Li is killed while Thompson has a panic attack and gets down behind a wall. The shooting stops when Nikolai grabs a gun and takes Happy Sam as his hostage, offering to give the Americans over to the Russian soldiers in exchange for his freedom. Dr. Ivchenko grabs a gun and kills Nikolai, and two sides start shooting at each other again. Peggy tries to get Thompson to help them out, but he is still crippled from a panic attack. Dugan then bursts through the wall, giving them a way out. Dugan offers Peggy a spot on the Howling Commandos (if they could come up with a nickname for her like "Miss Union Jack"), but she heads back to America with Dr. Ivchenko in tow. While on the plane, Thompson confides in Peggy that the Japanese soldiers on Tsuken Island offered their surrender, but he killed them all anyway and buried their white flag before anyone else could see it.

When they arrive back at the SSR's offices, Thompson and Peggy report on what they found to Chief Dooley. Thompson reaffirms Dooley's confidence in Stark's guilt by saying that makes sense that Leviathan got Stark's blueprints from Stark himself, even if Dr. Ivchenko has no knowledge of him ever being at that facility. Chief Dooley has them bring Ivchenko into his office and congratulates Peggy on her good work. Peggy starts talking with Sousa, who is still unnerved by his recent discovery. Sousa turns Thompson down on drinks, but Thompson invites Peggy to join him, a sign of his growing respect for her. 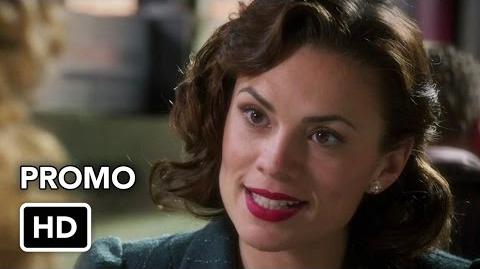 Like this? Let us know!
Retrieved from "https://marvel.fandom.com/wiki/Marvel%27s_Agent_Carter_Season_1_5?oldid=6498095"
Community content is available under CC-BY-SA unless otherwise noted.