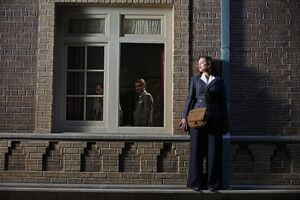 Margaret Carter! You're under arrest for treason, espionage, and aiding and abetting public enemy number one, Howard Stark.

Appearing in "A Sin to Err"

Synopsis for "A Sin to Err"

In Chief Dooley's office, Dr. Ivchenko recalls how Leviathan recruited him and three other scientists. A fourth, declined their offer to join Leviathan, and was killed on the spot by one of their female assassins. Agent Carter pesters the doctor for more information on Leviathan's women, to the point that Chief Dooley calls her out of his office to chastise her for putting so much pressure on Dr. Ivchenko. Peggy confides in her superior officer that she believes one of these female agents is behind the theft of Howard Stark's weapons, as she could get close to Stark, an infamous womanizer, with him ever suspecting a thing. Although skeptical, Chief Dooley tells her to follow up on her instinct and see if she can find more evidence that Howard Stark was duped by one of Leviathan's women. Meanwhile, Agent Sousa goes to see Leet Brannis' driver, Sheldon McFee, in prison, and he confirms that Peggy Carter was the one who attacked him the night he was arrested.

Peggy goes to the diner where she gets a new key to her apartment from Angie before meeting with Jarvis. She asks him if he could give him a list of the women Howard Stark was with shortly before his technology was stolen. There are too many for him to remember, but he takes her to a jeweler's to get a list of women who received a diamond-studded bracelet, a memento to commemorate their time together, from Howard Stark. They go to the addresses of each of the women on the list, all resulting in women still angry at Stark (which they take out on Jarvis). The last name on the list, Ida Emke, however, could not be found, and her apartment is mostly empty. One item that does remain is her bed, which has signs of wear around the headboard that Peggy deduces came from the handcuffs Leviathan's female assassins attach to their beds. Dottie, meanwhile, is in a dentist's office that looks in on Chief Dooley's office, and has a sniper rifle pointed at Dr. Ivchenko. The doctor is so impressed with New York that Chief Dooley lets him open his window and take a look outside. Ivchenko leans out the window, and Dottie, rather than sniping him, uses the glare on the rifle's scope to send him a message in Morse code. Ivchenko sends her a message back by making hand signals, sending her the order that her new directive is to kill Peggy Carter. Dr. Ivchenko closes the window and starts to try and hypnotize Chief Dooley, but they are interrupted by Agent Sousa with information that can't wait.

Peggy and Jarvis go back to the diner. She notices the diner starting to clear out, and recognizes two men still sitting in the diner as SSR agents from Washington. Realizing she is about to be arrested, she tells Jarvis to block the front door and attacks the agents sent to arrest her. After she takes them out, they escape into the alley behind the diner, where Agent Thompson is waiting for them with a gun drawn. He tries to get her to surrender to the SSR, but she incapacitates him as well. Peggy tells Jarvis to wait for her at the Dublin House while she goes back to the Griffith; however, she is soon caught by Agent Sousa. He tries to get her to stand down as well, but Peggy, realizing he would never shoot her, runs off without a fight. Back at Thompson's office, Dr. Ivchenko successfully hypnotizes Agent Yauch, who gives him the location of Stark's technology before walking into the middle of the road and is hit buy a car.

Peggy gets back to her room at the Griffith and grabs the vial of Steve Rogers' blood, but she hears the SSR making their way to her. Thompson and Sousa barge into her room, but Pegg has escaped out the window and is clinging to the side of the building. She is walking across a ledge when Angie opens her window and finds her outside. While Peggy tries to explain to her what is going on, Thompson and Sousa knock on Angie's door, telling her to let them in. Angie closes the window and lets them inside her room, where she gives them a sob story about Peggy leaving a little while ago to see her dying grandmother. The SSR buys Angie's act and leave to find Carter elsewhere. Peggy comes into Angie's room and thanks her for what she did, and then makes her way out of the Griffith. On her way out, she runs into Dottie. She starts asking Peggy about the agents looking for her, and out of nowhere pulls her in for a kiss. Peggy starts to stumble, and realizes Dottie was wearing the poisoned lipstick Peggy used against Spider Raymond. Before she can pass out, Peggy sees Dottie's wrists are scarred from the handcuffs she wears when she sleeps. Dottie pulls out a switchblade and gets ready to kill her, but Thompson and Sousa finds them. Dottie puts the switchblade away, and the SSR arrests Peggy.

That night, Angie tries to find Dottie for dinner, but when she goes into her room finds she's suddenly moved out. The SSR takes Peggy back to the interrogation room at their offices. Before she can be interrogated, Chief Dooley tells Thompson and Sousa not to go easy on her because she is a woman.

Like this? Let us know!
Retrieved from "https://marvel.fandom.com/wiki/Marvel%27s_Agent_Carter_Season_1_6?oldid=6498096"
Community content is available under CC-BY-SA unless otherwise noted.