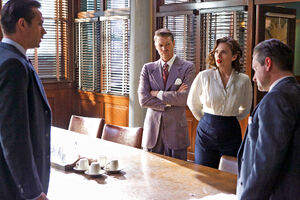 I conducted my own investigation because no one listens to me. I got away with it because no one looks at me. Because, unless I have your reports, your coffee, or your lunch, I am invisible.

In 1937, Dr. Fennhoff (the man the SSR knows as "Dr. Ivchenko") is in Russia helping a doctor work on injured soldiers. Dr. Fennhoff puts one soldier, Private Ovechkin, into a trance where he relives a happy memory so he can die comfortably.

Chief Dooley and agents Thompson and Sousa take turns interrogating Peggy Carter, whose secret investigations into Howard Stark's stolen technology was recently exposed. Peggy refuses to give Howard over to the SSR, and sticks with what she discovered about Leviathan and Dottie in her investigation. Before they can get anything out of her, Jarvis storms into the SSR's office with a hand-written confession from his employer, which he promises to hand over in exchange for Agent Carter's freedom. Dooley takes the confession, but holds Carter (who he officially fires from the SSR) and Jarvis until Howard Stark arrives to turn himself in.

The SSR leaves Peggy and Jarvis alone as she cleans out her desk. Jarvis reveals that he forged the confession, and Howard Stark has no idea any of this is going on. While they are talking about this, they notice Dr. Ivchenko in Chief Dooley's office communicating in Morse code with someone (Dottie, who they cannot see) across the street. From what they can see of Dr. Ivchenko's message, they can tell Leviathan will attack the SSR's office within 90 minutes. Since the SSR will never believe her suspicions about Dr. Ivchenko, Peggy decides to confess to everything about her investigation to Dooley, Thompson and Sousa. To support her claims, she tells them the truth of the last vial of Steve Rogers' blood, and how Stark manipulated her into stealing it because he didn't trust her. While Chief Dooley and Thompson are hesitant to believe what she says, Sousa fully believes she is telling the truth, so Dooley has a team go across the street to see if Dr. Ivchenko really was communicating with anyone. Chief Dooley, meanwhile, "babysits" the psychologist to observe him, but Dr. Ivchenko takes control of him when he makes him relieve a happy memory with his wife and children. He has Chief Dooley take Carter and Jarvis into the interrogation room, handcuff them to the table, and then lock them inside and break the key. He then makes his office's team of scientists clear out of their lab while the two of them go through Howard Stark's recovered technology. Although Dr. Ivchenko is looking for something called "Item 17," he also grabs another of Stark's technology - a vest.

Sousa, Thompson and two other agents go through the building across the street to find evidence of an incoming attack on the SSR. Dottie sees Agent Sousa, and darts back into the dentistry office she is hiding out in before he can see her. However, Agent Sousa hears the door close and sees her silhouette on the other side of it. He gets out of sight of the door, and, believing he had left, Dottie leaves the office. Agent Sousa confronts her, but she attacks him and gets away. She jumps down the stairwell and kills an SSR agent on the ground floor before leaving the building. Sousa sends Thompson and the other agent back to the SSR's office while he continues to look around for anything she may have left behind. Dr. Ivchenko, meanwhile, walks out with Item 17 in hand and is picked up in a car driven by Dottie. Back at the office, Peggy and Jarvis try to get out of the interrogation room by using the table to ram through the one-way mirror. Agent Thompson hears the commotion and goes to investigate. They tell him they need to find Chief Dooley, who they realize was being manipulated by Dr. Ivchenko. They find him asleep in his office (which is locked) where he is dreaming about being reunited with his wife and children, and has the vest from Howard Stark's vault strapped to him. They wake him up and he steps out of his office, but Jarvis recognizes the vest as a prototype of heated armor for combat in cold environments. The armor's power source was faulty and volatile, but, since the circuitry ran throughout the vest, it could not be removed. Realizing there's no way out of this, Chief Dooley grabs Agent Thompson's gun, and makes Peggy promise she'll get the guy who did this to him. He then runs towards the office's windows, shoots them out, and jumps out of the building moments before the vest explodes. Agent Sousa, who found Dr. Ivchenko's message to Dottie, sees the explosion from across the street.

Meanwhile, Dottie enters a crowded movie theater with a carriage holding Item 17. She turns the device on, which releases a gas into the air, and leaves the theater with Dr. Ivchenko. The audience in the theater start to get agitated, and eventually a fight breaks out. Some time later, and usher leads a couple late for the movie into the theater, and finds the audience dead.

Like this? Let us know!
Retrieved from "https://marvel.fandom.com/wiki/Marvel%27s_Agent_Carter_Season_1_7?oldid=6498097"
Community content is available under CC-BY-SA unless otherwise noted.