"The Lady in the Lake" 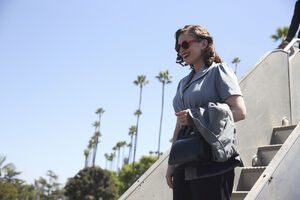 Ready for another adventure, Miss Carter?

Appearing in "The Lady in the Lake"

Synopsis for "The Lady in the Lake"

Dottie Underwood, disguised as Peggy Carter, robs a bank with a team of Communist agents. Dottie has the bank teller take her to the vault where he would open a specific security box containing a lapel pin. The SSR, however, was aware of Dottie's plan, and Peggy is waiting inside the vault for her with a shotgun. The bank teller reveals himself to be with the SSR, as are the bank's patrons Dottie's accomplices hold hostage, one of whom is Chief Jack Thompson. The chief and his men take care of them while Peggy fights Dottie in the vault. Peggy knocks her out with a blow to the back of her head with a bag of coins.

The SSR takes Dottie back to their office. While Peggy interrogates her, Chief Thompson receives a call from Daniel Sousa, who is now the chief of the SSR's newly-opened West Coast branch. Detective Andrew Henry of the LAPD contacted him with a murder committed by the infamous "Lady in the Lake Killer" when the victim's body was found frozen in a lake despite a current heat wave. Sousa wants Thompson to send a man over to aid in the investigation, and Thompson tells Peggy to pack her bags for Los Angeles, telling her that Sousa asked for her specifically.

Jarvis picks up Peggy when she arrives in California. Howard Stark has moved to Los Angeles on a contract from the War Department, but is currently away scouting locations for a movie. Peggy will stay at his mansion with Jarvis and his wife, Ana, while he's gone. Jarvis takes her to the SSR's West Coast office. Sousa is shocked to see her, but regains his composure and catches her up on the case. Peggy thinks that the ice and the body aren't connected; that the lake freezing only revealed the corpse to the police. Peggy, Sousa, and Det. Henry see the SSR's medical examiner, who shows them that not only is the corpse frozen through, but is also emitting a blue glow. Another lab tech confirms for them that the deceased must have come into contact with a substance that could have only come from a particle accelerator, and the nearest one is in Pasadena with Isodyne Energy.

Peggy, Sousa, and Det. Henry go to Isodyne's headquarters to investigate; however, the receptionist stops them at the front door for lacking a warrant. Sousa distracts the receptionist while Peggy sneaks into the labs. She bumps into an African-American scientist, Dr. Jason Wilkes, who takes Peggy into his lab to test a synthetic wine he's developing. Peggy shows him a picture of the deceased, who he identifies as an Isodyne scientist named Jane Scott. According to him, Dr. Scott was having an affair with Calvin Chadwick, Isodyne's owner currently campaigning for a senate seat. Before he can say anymore, Peggy is discovered and is asked to leave. Dr. Wilkes shows her out and gives her his business card and personal number.

Det. Henry doesn't want to go after Chadwick due to his political connections. Peggy, however, independently confronts Chadwick at a racetrack while Jarvis distracts his wife, Hollywood actress Whitney Frost. Peggy at first poses as one of his supporters before bringing up Jane Scott and dropping the act. Chadwick denies he knows about Scott's death, and says that he cannot reveal any of Isodyne's secrets due to the company's numerous government contracts.

Back in New York, Chief Thompson fails to make any progress with Dottie. She is clearly obsessed with Peggy and isn't intimidated by Thompson. She even attacks him in the interrogation room, flipping the table on top of him before other SSR agents pull her off. Thompson doesn't have too much time to try a new method of interrogation, however, as the FBI barges into the interrogation room, cuts Dottie's chains, and takes them into her custody. Leading the FBI agents is Vernon Masters, an old friend of Thompson's family. Masters tries to explain the situation to Thompson over a beer. He says that the SSR is "going the way of the dinosaur," and that Thompson could be part of the next big thing if he plays his cards right. Masters then explains that Dottie was trying to steal something from powerful people with even more powerful allies.

Peggy returns to office with Jarvis. She and Sousa find the medical examiner frozen like Jane Scott's corpse. His body falls over and shatters into tiny pieces of dark glass. They call Dr. Wilkes to see if he can offer any advice as to what happened to their medical examiner, but he can't offer much help. Meanwhile, the results of Dr. Scott's autopsy arrives, and reveals that her organs failed prior to receiving the knife wounds, meaning the substance that caused her to freeze killed her and her body was made up to look like a victim of the Lady in the Lake Killer. Since the details of the killer's style were only known to a few individuals, their suspicions turn to Det. Henry, who since discovered he's been infected by the substance that killed Dr. Scott and the medical examiner. He kidnaps Dr. Wilkes in hopes that Wilkes could "fix" him.

Peggy, Sousa and Jarvis follow in pursuit, and find his car abandoned with the steering column frozen from his worsening condition. Det. Henry has Jason at gunpoint under a bridge, and reveals that he disposed of Jane Scott's corpse and made her look like a victim of the Lady in the Lake Killer to revive the case. Gunshots from the police gives Dr. Wilkes the distraction he needs to run away and is soon found by Peggy. She radios the other officers, telling them not to fire on Det. Henry due to his condition. Sousa, meanwhile, runs into Det. Henry, who pulls a gun on him. He tries to shoot the chief, but the gun has completely frozen. Peggy tries to get him to stand down, tries to assure him that he can be helped, but he says "they" won't let him. Before he can explain who "they" are, a rookie cop shoots Det. Henry, and his body shatters like the medical examiner's.

Peggy sees how Dr. Wilkes is doing after this traumatic event. He says they don't need to worry about being infected by the substance, since Det. Henry and the medical examiner were likely only infected because they came into contact with her blood. Jason offers to "thank" Peggy for what she did for him by taking her out for dinner and a dance, but Peggy says she cannot get involved with people involved in her work. Peggy and Chief Sousa return to the office and discuss the case. Peggy realizes she'll be in Los Angeles for a while longer, and gets her things while Chief Sousa leaves. From a window, she sees him meet with a woman. Elsewhere, the rookie cop who shot Det. Henry receives an envelope of money from Calvin Chadwick. As the cop drives away, Chadwick congratulates Whitney, who is sitting right next to him, for figuring out how they would get out of this situation. Whitney hopes this is the last time they have to get their hands dirty.

At Isodyne's labs, Dr. Wilkes looks at a strange substance defying gravity and contorting in its case.

Like this? Let us know!
Retrieved from "https://marvel.fandom.com/wiki/Marvel%27s_Agent_Carter_Season_2_1?oldid=6498099"
Community content is available under CC-BY-SA unless otherwise noted.