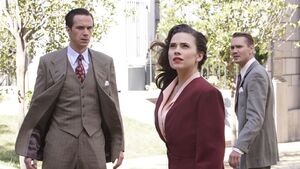 I'd like to postpone Armageddon if we can help it.

Peggy holds Chief Thompson at gunpoint, threatening to shoot him if he doesn't put down the detonator for the Gamma cannon. Before Thompson can push the button to detonate the bomb, an explosion of Zero Matter comes from inside the waste facility. Peggy, Thompson, and Sousa go inside to investigate. They find Zero Matter on the floor and Dr. Wilkes knocked to the ground and free of the Zero Matter. As he gets to his feet, Whitney Frost absorbs the Zero Matter that left his body in the explosion. Realizing their guns are no use from Whitney Frost, they run out of the building only to find Samberly and the car are nowhere to be seen. As Whitney Frost catches up to them, she's run over by a car driven by Jarvis with Howard Stark in the back seat. They catch up with Samberly and go back to the SSR's office. While Sousa and Thompson weed out the agents who worked with Vernon Masters, Jason describes the Zero Matter's dimension to Howard and Peggy. He says that world was empty, completely devoured by Zero Matter, and the substance was using himself and Whitney Frost to infect other worlds.

Whitney Frost locks herself inside a room in Joseph Manfredi's house to begin work on another method to open another rift to the Zero Matter's dimension. However, her all-consuming dedication to her work greatly disturbs Manfredi. The next day, he goes to Howard Stark's mansion to get his help, interrupting Howard, Peggy, and Dr. Wilkes' breakfast by pretending to hold Jarvis at gunpoint before revealing himself to be a friend of Howard's. He says they should all work together because they are all concerned about Whitney, even if they're concerned for different reasons. Howard says they should, as all great scientists do, steal her work so they can open a rift before she can, and then hit her with the gamma cannon. That night, Manfredi tricks Whitney into leaving her room to intimidate one of his disloyal men, giving Peggy and Sousa the opening the get inside and take pictures of her formulas. Her writing covers the room's walls, giving the two agents insight into her megalomania. They sneak out her window just before she comes back into the room. Before they leave, Sousa changes one of the numbers in her formulas to slow her down.

Peggy and Sousa take Whitney's work back to the SSR's labs, where the collective minds of Howard, Samberly, and Dr. Wilkes deduce she's working on a device that connects the space-time of her world to that of the Zero Matter dimension's. With Peggy's encouragement, they come up with a way to make rift generator work, and Jarvis suggests they turn it on in Howard's film lot to keep the rift away from any innocent bystanders. While the rest of the team finishes building the device, Thompson shows up to offer his help, but they decide the best thing for him to do is collect their dinner orders. While Thompson orders their dinner, he finds Vernon Masters' portfolio and the redacted file about Peggy's activities during the war. He also finds his Arena Club pin that, when twisted, becomes a key.

Peggy and her team sets up their trap at the Stark Pictures lot. Whitney Frost feels the rift to the Zero Matter's dimension open once they turn the device on and is compelled to come to it. While they wait for Whitney to arrive, Thompson shows Peggy the Arena Club pin he turned into a key. They hear Samberly scream, alerting them to Whitney Frost's presence on the lot. She approaches the rift, walking right into the SSR's trap. Howard fires the gamma cannon at her, causing the Zero Matter to leave her body and go back through the rift. With Whitney Frost de-powered, Peggy, Sousa and Thompson take her under arrest while noting that the scar on her face has vanished.

Just as everything seemed to be running smoothly, Howard Stark realizes he cannot remotely shut down the generator. The only way to close the rift now would be to do so manually, but the person who does that would be sucked into the rift as it closes. While the team argues over which of them will sacrifice themselves, Sousa anchors himself to a pole and goes in to close it. As they try to figure out a way to close the rift without losing Sousa, the rope Sousa used to anchor himself unties, sending him flying into the air. Peggy grabs the rope before he falls in, and Howard, Thompson and Dr. Wilkes hold on to her to anchor her to this world, as well. Jarvis comes up with an idea and leaves to find Dr. Samberly. When he comes back with him, he has Dr. Samberly put the gamma cannon's core in Stark's hovercar, and Jarvis send the hovercar flying into the rift. Once on the other side of the rift, the car and the core explode and close the rift. Sousa, surprised he's still alive, faints.

The next day, Peggy finds out over breakfast that Howard hired Dr. Wilkes to head a new operation in Malibu. Howard leaves to take a swim, and Peggy and Jason say their goodbyes. She takes her bags outside as Jarvis comes up the driveway with Ana. They say goodbye, and Ana convinces Peggy to let Jarvis drive her to the airport instead of taking a taxi. Jarvis drops her off at the office so she can close the Isodyne case. Since she'll get a ride with Thompson from there, Jarvis tries to convince her to stay in Los Angeles before he leaves her. In the office, she closes the case with Sousa before the chief teases her for not letting him sacrifice himself. Rather than try to make a come back, she kisses Sousa.

Joseph Manfredi visits Whitney Frost in an asylum. Since losing the Zero Matter, Whitney's mental state has deteriorated to the point that she believes she's sitting in front of her mirror and next to Calvin Chadwick. Manfredi wants to give her flowers, but her attendant says she'll only use them to carve her face to resemble her Zero Matter scar. Meanwhile, Jack Thompson is packing in his hotel room preparing to go back to New York alone when he hears a knock on his door. He answers it, but an unseen assailant shoots him in the chest. The assassin takes Carter's redacted file from his luggage as Thompson bleeds out on the floor.

Retrieved from "https://marvel.fandom.com/wiki/Marvel%27s_Agent_Carter_Season_2_10?oldid=5520051"
Community content is available under CC-BY-SA unless otherwise noted.