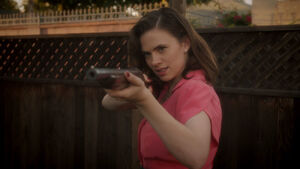 That's the beauty of Hollywood. You can be whatever you want.

Appearing in "Smoke and Mirrors"

Synopsis for "Smoke and Mirrors"

Peggy Carter, as a young girl in England, pretends she is a knight fighting a dragon. Her older brother, Michael, takes the sword away from her, and teases Peggy by holding it over her head and out of her reach. Peggy knocks her brother down to get the sword, but their mother breaks the two children up.

By 1940, Peggy works as a codebreaker in Bletchley Park. She is recently engaged to her boyfriend, Fred Wells, a soldier working for the home office. Her boss takes her into his office and tells her that she's been offered a chance to join the SOE. She's unsure if she's meant for field work, and says she'll discuss it with her fiancé. Later, at her engagement party, Peggy introduces Fred to Michael, who has been fighting the Nazis on the front lines of World War II. The news that Peggy is going to turn down the SOE offer disappoints Michael, as he was the one who recommended her for the job. He wanted to provide his sister with the life of adventure that she wanted, not the domestic life that everyone else drummed into her.

Some time later, her mother helps Peggy into her wedding dress when soldiers arrive at the front door. Peggy watches from the window as her mother collapses. She knows this could only mean one thing - Michael died in the fighting. Peggy calls off the wedding and joins the SOE.

Agnes Cully - the future Whitney Frost - grows up in Broxton, Oklahoma during the 1920s. Her mother, Wilma, lives off her boyfriend, Bud. She wants her daughter to be "sweet" towards Bud, but she really cannot stand him. Agnes is instead more interested in science, even teaching her self how to build a radio.

In 1928, Wilma finds out that Bud is with another woman - one who's only a year older than Agnes. Wilma tries to convince Bud to stay with her, but he says they have to get out within a day. Wilma blames Agnes, who is now sketching much more advanced machines, for him leaving her, saying she should have been nicer to him. She shows her daughter her college rejection letter, and reminds her that the world doesn't care about what's in her head but on her face.

Agnes made her way to Hollywood by 1934. She goes to a movie to forget about her problems, and she runs into a talent agent outside the theater. He thinks she could have a future in Hollywood, and gives her his business card. In Hollywood, he says, you can be whatever you want.

Peggy Carter and Jarvis stake out Calvin Chadwick's campaign office while on the hunt for Whitney Frost. No one has seen her since her director disappeared, and she isn't at her husband's office, either. When Calvin Chadwick leaves, Peggy sees that his driver has a wound similar to the one she gave to the man that tried to kill her. She finds out that the man is Rufus Hunt, a veteran of the Pacific Campaign who was dishonorably discharged for Black Market profiteering and the current head of security at the Arena Club. Peggy and Jarvis come up with a plan to capture him. Jarvis pounds on his front door, pretending to be a police officer. When Hunt runs out through his back door, Peggy is waiting for him with Jarvis' tranquilizer gun. The solution isn't enough to take Hunt down, however, as he rips the dart out of his side and lunges at Peggy. He knocks her to the ground, but she's close enough to grab the dart and sticks him in the arm again. The tranquilizer takes him down this time, and Peggy and Jarvis stuff him in the trunk of Jarvis' car. Before they drive away, Hunt pops out of the trunk and sticks Jarvis with the tranquilizer before Peggy shoves him back in.

Chief Sousa is waiting for Peggy when she returns to Stark's mansion. Sousa quickly finds out that she has Rufus Hunt in the back of her car, and is livid that she would so something so reckless without going to him first. They tie Hunt up in Stark's basement to interrogate him. When Sousa's attempts to get anything out Hunt fail, Peggy injects him with one of Howard's (relatively) harmless cold cures that she tells him is malaria that will kill him in twenty minutes. Hunt cracks, and gives up Thomas Gloucester and Hugh Jones as members of the Council of Nine, a group of powerful industrialists who meet at the Arena Club and orchestrate national tragedies from behind the scenes. Jarvis, meanwhile, helps Dr. Wilkes work on a way to make him tangible again, but with little result. Jason starts to see a rift of Zero Matter appear in his chalk board before Jarvis snaps him out of his trance.

Sousa gets a warrant to search the Arena Club with Hunt's information. However, the FBI swarms the SSR's West Coach Branch office and stops the raid. Vernon Masters, acting as a representative of the War Department, presents Chief Sousa with an executive order for an audit of the branch's cases. As the FBI goes through the SSR's files, Masters talks with Peggy in the chief's office in private. Peggy realizes Masters is with the Council of Nine when he demands she reveal the source of her information. When she refuses, Masters implies that he could have her, Sousa, and the entire SSR branded as Communist traitors to the United States.

Sousa meets Peggy outside the office. He assures her that he's still with her to the end despite Masters' threats, and shows her the one piece of evidence they still have - a tissue sample from Jane Scott's autopsy he had Dr. Samberly hide from the FBI. They go back to Stark's mansion and let Rufus Hunt escape. He doesn't realize he has a device on his back that lets them listen to everything he says when he runs to Calvin Chadwick's house. Whitney Frost lets him in and he helps himself to their liquor cabinet. Hunt tells Chadwick about Peggy Carter when he arrives home, but Whitney Frost wants him to reveal what he told her. He says he gave up a few names, infuriating Chadwick. Hunt says that Calvin has to protect him or else he'll give up his and his wife's work with the Zero Matter to the Council. Whitney, however, has spent the day learning how to control the Zero Matter inside her. She grabs Hunt by the throat, and he is absorbed by the substance like her director. Peggy, Sousa, and Jarvis can only listen in as something happens to Hunt that kills their connection. Once Hunt's body is gone, Chadwick recoils in fear from his wife, wanting to know what she's become as the scar on her face grows even larger. She answers with, "Whatever I want..."

Retrieved from "https://marvel.fandom.com/wiki/Marvel%27s_Agent_Carter_Season_2_4?oldid=5550977"
Community content is available under CC-BY-SA unless otherwise noted.