"Life of the Party" 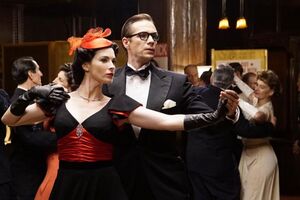 I have a terrible idea...

Appearing in "Life of the Party"

Synopsis for "Life of the Party"

Peggy's voice pulls Dr. Wilkes back into the corporeal world. They realize he needs to get his hands on more Zero Matter soon before he disappears entirely, but the only place they know they can find more is in Whitney Frost. Peggy comes up with a plan to take it from her at a campaign event for Calvin Chadwick that night by sticking her with a modified syringe. Sousa, however, points out that there's no one who could carry out this mission. Whitney Frost would recognize Peggy and Jarvis, Sousa wouldn't work as Jarvis' date (the tickets for the event being Howard Stark's, Jarvis would have to go anyway), and Rose is out of town. Out of any other options, Peggy comes up with a "terrible idea" - Dottie Underwood.

Peggy, disguised as a psychiatrist, sees Dottie while she's imprisoned in the Cube. Dottie immediately sees through Peggy's act and realizes she needs her help. Peggy tells her she needs her help in bringing down the Arena Club, and in return Peggy promises to get rid of the red tape preventing her from being deported back to the Soviet Union. Dottie, however, sees through this, too, and with the mutual understanding that they're both trying to get the best of each other, Peggy gives Dottie a device she can use to break out of her cell and instructions on how to get out of there. Dottie breaks out not long after Peggy leaves. Once she's outside, Dottie goes in the opposite direction Peggy told her to go, only to run into Peggy and Chief Sousa. Sousa captures her in an electrified net, which brings her to the ground much to Peggy's enjoyment.

Dottie wakes up in a salon chair at Howard Stark's mansion. Peggy prepares Dottie for the mission, giving her a diamond choker with a tracking device and a neurotoxin if she tries to remove it, and a hat with a radio in it so they can communicate with her. Jarvis' communication device is in a pair of glasses. That night, Jarvis and Dottie get into Calvin Chadwick's campaign event while Peggy and Sousa stay by the radio in a van outside. They notice Calvin Chadwick and Whitney Frost, but they also see Vernon Masters is there with Jack Thompson. Masters introduces him to the various members of the Council of Nine in attendance before Hugh Jones confronts him about Peggy Carter snooping around in his office a couple days earlier. When Thompson denies he knows anything about her activities, Vernon Masters reminds him that he'll need to rein her in if he wants to keep climbing the social ladder.

Jarvis and Dottie spring into action when they spot Whitney Frost heading into the powder room. Jarvis distracts Jack Thompson while Dottie follows her in. She meets Whitney Frost in the doorway when she leaves, using the opportunity to stick her with the syringe. She abandons her radio in the bathroom, however, and starts looking around on her own, eventually hiding in a closet in the Council's board room. The Council enters soon afterwards with Whitney Frost, who proceeds to give them a demonstration of her control over the Zero Matter. Calvin Chadwick and the Council appear to be pleased with Whitney's demonstration, but two guards approach her from behind and try to strangle her. Whitney uses the Zero Matter to kill the guards and several members of the Council, including Thomas Gloucester, before turning on her husband and killing him, too. She then assumes a leadership position on the Council by intimidating the surviving members.

Jarvis scrambles to find Dottie and get out of there before Thompson can have them removed, unaware of what's happened to Dottie. Sousa checks Peggy's wound, and when Peggy brings up Violet he tells her she broke off the engagement. Peggy wants to try and convince her to get back with Sousa only to find out she's the reason she called it off. Just as Peggy and Sousa are about to kiss, something crashes onto the truck, breaking the equipment inside. They leave the truck to see a dead body on top of it, a body Dottie threw out of a window. Vernon Masters found Dottie and sent his men to capture her. She manages to fight most of them off, but Jack Thompson gets the better of her.

Jarvis meets Peggy and Sousa outside. Dottie isn't with him, but managed to find the vial of Zero Matter before hotel security escorted him out. Back inside, Hugh Jones brings Vernon Masters up to speed as to what happened with Whitney Frost and the Council. Masters then chews Thompson out for having so little control over Peggy Carter, and then orders him to "destroy" Peggy before she can ruin any more of the Council's plans. Thompson reluctantly accepts Masters' orders. The team returns to Stark's mansion by sunrise and gives Dr. Wilkes the vial of Zero Matter. Dr. Wilkes tries to give them instructions on how to build a containment chamber for the substance, but Sousa and Peggy are more focused on finding Dottie Underwood before she can hurt anyone. Jarvis informs Peggy that Thompson is there to see him. She changes into a nightrobe, but Thompson knows what she's really been up to. He tries to convince her to drop the case and return with him to New York before the Council comes crashing down on her. Peggy, however, is adamant about seeing this case to the end.

Elsewhere, Dottie Underwood wakes up in chains at the mercy of Whitney Frost.

Like this? Let us know!
Retrieved from "https://marvel.fandom.com/wiki/Marvel%27s_Agent_Carter_Season_2_6?oldid=6498105"
Community content is available under CC-BY-SA unless otherwise noted.