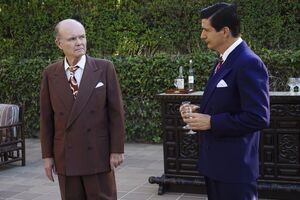 Is this supposed to be a rescue? What a nice surprise!

Whitney Frost holds a press conference to announce the deaths of her husband and his associates, only she says they died in a boating accident. Peggy Carter and Chief Sousa attend the press conference, but they know she's responsible for their deaths. They also think that Whitney Frost has Dottie Underwood, but will probably keep her alive. They go back to Stark's mansion to come up with a plan to rescue her. Dr. Wilkes, however, think they should just activate the neurotoxin in her choker and kill her rather than waste time trying to find her. The rest of the team recognizes his frustration and tries to calm him down, but he says he's facing something worse than death. They put the search for Dottie aside for the time to finish building Jason's containment chamber. Once it's done, he gets inside and absorbs the Zero Matter. The shock of absorbing the substance knocks him down, where he's surprised when he doesn't go through the ground. Peggy reaches out to grab his hand, and Jason pulls her in to give her a kiss.

Meanwhile, Dottie is tied up in the basement of Calvin Chadwick's Santa Clarita ranch as Vernon Masters tortures her. Whitney Frost has made the ranch the headquarters of the Council of Nine, and has Joseph Manfredi's men working as security. Although Masters is a skilled interrogator, none of his usual techniques work on Dottie. The interrogation ends, however, when Whitney Frost orders Vernon Masters to shake down the SSR and find the uranium rods Peggy stole from the Roxxon facility. Whitney interrogates Dottie in his place, using her control over the Zero Matter to break her. Dottie gives up everything she knows, including the fact that Jason Wilkes is still alive. Pleased with what she's learned, Whitney Frost puts a plan in motion, starting with reactivating the tracking device in Dottie's choker.

Peggy and the team receive Dottie's signal. Now that they know where she is, Peggy calls Sousa to give him this information, but Vernon Masters is within earshot. She and Jarvis plan a rescue using the "Jitterbug," a creation of Howard's that sends out a powerful, concussive blast. Ana, however, is concerned for her husband's safety. Before they leave, she makes him promise her he'd stay safe. During the drive to the Chadwick Ranch, Jarvis tries to get Peggy to bring up her feelings for Dr. Wilkes and Chief Sousa, but Peggy is clearly uncomfortable talking about such things.

They arrive at the ranch after nightfall. Jarvis goes in first, distracting a guard so Peggy can knock him out. His gun fires when it hits the ground, alerting the rest of Manfredi's men to their presence. Jarvis prepares the Jitterbug, but he can't seem to get the sequence code right. Manfredi's men surround Peggy and Jarvis, forcing them to surrender. They take the two of them down to the basement where they're holding Dottie, who is surprised to see them launch an, albeit failed, rescue. The men tie them up as well and leave them. Peggy notices Dottie's been tortured. She tries to get Dottie to reveal what information she gave them as they try to escape their bonds, but Dottie only says Vernon Masters got nothing out of her. Jarvis, however, manages to get out of his bonds before them, and suddenly realizes he was putting in a code for a different function of the Jitterbug, a delayed explosion. The Jitterbug goes off, taking down all of Joseph Manfredi's men, giving the three of them their chance to escape. While on their way out, Peggy realizes Whitney Frost tortured Dottie too. Dottie tells them Whitney had set a trap, but it wasn't for them.

Back at Howard Stark's mansion, Ana and Dr. Wilkes enjoy a Hungarian feast, the first thing Jason has eaten since he became incorporeal. Whitney Frost breaks into the mansion as Ana leaves the table to get another bottle of wine, thinking the alarm system is going off because she's messing with the lock on a cabinet. Whitney Frost makes her way to the basement and finds Jason Wilkes in his containment unit. She attempts to absorb the Zero Matter in his body into her own, but Jason ends up pulling the substance out of her instead. The sudden increase of Zero Matter in his body gives Jason the strength to leave the containment unit without becoming incorporeal, but both he and Whitney Frost can tell the effect won't last for long. Whitney recognizes Dr. Wilkes' talents, and suggests they work together in bringing more Zero Matter to their world. Joseph Manfredi comes into the basement, causing Jason to lash out at him when he makes a racist remark. Manfredi distracts Jason as Whitney Frost sneaks up behind him and knocks him out.

Ana Jarvis notices Whitney Frost and Joseph Manfredi putting the unconscious Dr. Wilkes in their car. Manfredi holds her at gunpoint when she tries to stop them, but Whitney has him put the gun down. When they see Jarvis' car pulling up behind them, Whitney grabs the gun and shoots Ana herself. Peggy and Jarvis hurry Ana to the hospital, where she's immediately taken to the ER. As the hospital's staff separates them from Ana, they find out Dottie escaped from the trunk of their car. The next morning, Daniel Sousa returns to his office after being badly beaten by men working for Vernon Masters the night before. Masters is waiting for him in his office. With the search for the missing uranium stalling, Masters says Sousa should get some rest, and takes over the SSR's operations in Los Angeles. Peggy, who is still at the hospital with Jarvis, tries to call Sousa only to hear Vernon Masters on the other end. She hangs up without saying a word, and tries to console the visibly distraught Jarvis.

Retrieved from "https://marvel.fandom.com/wiki/Marvel%27s_Agent_Carter_Season_2_7?oldid=5550984"
Community content is available under CC-BY-SA unless otherwise noted.