"The Edge of Mystery" 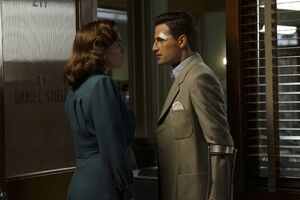 You know this will work the same way that I do... because the whisper in your head says it will.

Appearing in "The Edge of Mystery"

Synopsis for "The Edge of Mystery"

At the hospital, Jarvis tries in vain to find Ana's favorite radio station in hopes it would awaken her out of coma. Peggy, aware of Jarvis' distress, reminds her friend that Ana's condition is stable, and that he should get cleaned up so he looks like himself when she wakes up. Peggy returns to Howard Stark's mansion to find Chief Sousa outside with the news that Vernon Masters is looking for the nuclear rods for Whitney Frost. He suggests they go after Joseph Manfredi, Whitney's old boyfriend, as men working for him were with her at the Roxxon facility. They go to Manfredi's restaurant, and, after beating up his goons, sit down with him and his rambunctious grandmother. Chief Sousa threatens to spread a rumor that Manfredi gave up another gangster to the state if he doesn't deliver a message to Whitney Frost. Back at the hospital, Ana finally wakes up from her coma. Her physician takes Jarvis out of the hospital room to give him the news that, while Ana will otherwise be fine, the damage done to her body makes her unable to have children. Jarvis tells the doctor that he'll tell Ana about her injuries himself, but later lies to her by saying she's perfectly fine.

Meanwhile, Whitney Frost has Dr. Wilkes chained up in a warehouse so she can observe the effect the Zero Matter has on him. Jason tries to buy time until he would be incorporeal again and phase through the handcuffs, but Whitney sees right through his plans. She then starts hearing voices, and reaches down to touch Jason. Later, Whitney has Dr. Wilkes read her research notes, but he still only thinks of her as a maniac. As she tries to teach him to control the Zero Matter, Joseph Manfredi arrives with Peggy's message - she'll give Whitney Frost the nuclear rods in exchange for Dr. Wilkes.

Dr. Samberly delivers fake nuclear rods to Stark's mansion for Peggy to trade for Dr. Wilkes. Jarvis arrives at the mansion soon afterwards. Peggy takes Jarvis aside to have a private word with him about Ana when Howard Stark wires them information that Dr. Samberly recognizes as schematics for a gamma-powered weapon that could reverse the effects of Zero Matter and possibly cure Jason. With Samberly stuck at the mansion building the device, Jarvis offers to drive them the exchange, but before they leave, they find Jack Thompson upstairs. Thompson shows Peggy a redacted file supposedly reporting war crimes she committed during World War II, and threatens to expose her as a war criminal if she doesn't go back to New York with him. Peggy, recognizing the document as a forgery, calls Thompson's bluff and leaves with Sousa and Jarvis.

Peggy and the team meet with Whitney Frost as planned. Whitney drags a handcuffed Jason Wilkes out before Peggy, who's surprised to see he is still tangible. Peggy hands over the fake nuclear rods, and after Whitney verifies they're real (Dr. Samberly made them give off a radioactive signature), she passes Dr. Wilkes over to them. One of Joseph Manfredi's men accidentally drops the rods, revealing them to be fake. Peggy and the team make their getaway with Jason Wilkes safe in his containment chamber. However, once they notice Whitney Frost's men are keeping their distance from the truck, Dr. Wilkes pulls a gun on them and demands they give him the real rods. Sousa tells him they're at the SSR's lab when he holds the gun to Peggy's head, and Dr. Wilkes phases through the side of the car. Jarvis stops the truck in time for the team to see Dr. Wilkes drive away with Whitney Frost.

Back at the SSR's office, Thompson shows Vernon Masters the file he found on Peggy's wartime activities. As Masters congratulates him for his findings, Thompson says he questions the document's validity. Thompson leaves Master's office when he gets a call from Whitney Frost, telling him where the nuclear rods can be found and the location of where to meet her with them. Thompson hears the entire conversation from a phone at one of the desks. That night, Thompson confronts Masters as he attempts to take the rods. Peggy and Sousa arrive at the office some time later to recover the nuclear rods before Whitney Frost could get her hands on them, but they find the rods gone and a shocked Jack Thompson on the floor. They realize Masters used Dr. Samberly's memory inhibitor on him, but Thompson's memory soon comes back to him. Thompson decides to go with Peggy and Sousa to stop Whitney Frost. As Thompson is on his way out the door, Sousa makes sure Peggy knows that Dr. Wilkes is no longer a hostage but a hostile. The two of them argue over how they should treat Dr. Wilkes until Thompson interrupts and reminds them they have to stop Whitney Frost. Meanwhile, in the downstairs office, Dr. Samberly flirts with Rose before Jarvis gives her some of his possessions, instructing her to look after Ana in case something happens to him. Before he leaves, he gives her one last item - his will.

Whitney Frost and her men set up the atomic bomb in the desert to recreate the event that brought the initial supply of Zero Matter to their world. Jason has his doubts this will work, but Whitney says they know it will work because the voices in his head says it will. Vernon Masters detonates the bomb, and Peggy and Jarvis from their car see the sky crack like it did in the film reels. Jason and Whitney leave their car to see the crack themselves, but Whitney is surprised to not hear any of the voices that Jason does. The rift draws Jason into it, leaving Whitney behind. Meanwhile, Dr. Samberly sets up the gamma canon and fires it into the rift, but he was able to make a battery powerful enough for only one shot. Jarvis, unsure of their chances with the gamma canon, drives towards the rift to prevent Whitney Frost from getting away. Peggy follows him in the truck, and watched as the gamma canon fires into the rift, causing it to collapse. Jason Wilkes falls to the ground with Zero Matter pulsing through his face. Whitney hurries to where Jason lands, but Jarvis drives up behind her and shoots her. Peggy is right behind him, and they see Whitney Frost's bullet wounds heal before their eyes. Before they can get away, Joseph Manfredi and his men surround them and hold them at gunpoint. Whitney Frost realizes that the best way to get what she wants out of Jason is to keep them alive. Manfredi's goons knock Peggy and Jarvis out with a blow to the backs of their heads.

Like this? Let us know!
Retrieved from "https://marvel.fandom.com/wiki/Marvel%27s_Agent_Carter_Season_2_8?oldid=6498108"
Community content is available under CC-BY-SA unless otherwise noted.