"A Little Song and Dance" 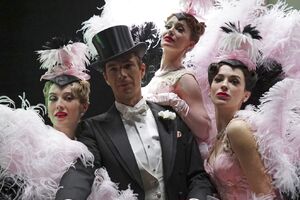 Our job is keeping people safe. If that means using Vernon to take down a lady who kills people with black space goop, that's what's gotta happen.

Appearing in "A Little Song and Dance"

Synopsis for "A Little Song and Dance"

Peggy finds herself in a dream after being knocked out by Joseph Manfredi and his goons. The dream is in the SSR's New York office, and entirely in black-and-white. Her dead brother Michael sits in the chief's office. The dream soon turns to color and s he then finds herself at Dottie's counter. The dream then evolves into an elaborate song-and-dance number where Jason, Sousa, Angie, and Dottie ask her what she really wants and what she'll do about it. Jarvis interrupts to tell her to wake up, and Rose punches her in the face. The dream ends when a bump in the road causes her to wake up. Peggy uses one of Dr. Samberly's gadgets, the hotwire, to break her and Jarvis out of the back of the truck. Once the cars have driven off far enough, Peggy and Sousa make their way back towards civilization. The two of them argue over their life choices and the meaning of loss on the way back. Whitney Frost discovers her prisoners have escaped when she tries to intimidate Dr. Wilkes into going along with her plan. She has two of Joseph Manfredi's men go back and find them, but Peggy and Jarvis manage to take them out and steal their car.

Thompson, Sousa and Samberly try to figure out what to do now that their car is gone. Samberly sees a car in the distance, but Sousa recognizes the car as belonging to two SSR agents working for Vernon Masters. Thompson comes up with a plan to get them all out of there alive. Sousa and Dr. Samberly hold Thompson at gunpoint when the agents arrive. Sousa tells them to take Thompson away, but they turn their guns on him instead. Thompson convinces them to take them away alive by making them believe he was out there to stop Carter. They're taken back to the SSR offices where Vernon Masters asks why Sousa and Samberly aren't dead yet. Thompson says they need them to repair the Gamma cannon for Whitney Frost. When Vernon suggests Whitney could repair it herself, Thompson proposes they use the cannon on her instead. Vernon knows how dangerous she is, and agrees to go along with Thompson's plan. Peggy arrives at the office shortly thereafter and starts pummeling Vernon Masters, demanding to know what he did to Sousa and Samberly only for Sousa to pull her off him. Sousa and Thompson bring Peggy up to speed with their uneasy alliance with Vernon Masters to bring down Whitney Frost. Peggy reluctantly agrees to go along with their plans, and Thompson leaves to see Whitney Frost and buy more time to fix the Gamma cannon.

Meanwhile, Whitney Frost has set up a lab in a waste disposal facility running as a front for Joseph Manfredi's criminal activities. She has Jason strapped to an operating table, torturing him by using every kind of painful instrument to try and fail at extracting the Zero Matter from his body. Manfredi interrupts one torture session involving a large syringe to let her know one of Vernon Masters' men is there to see her. Whitney is surprised to see Chief Thompson instead of Vernon Masters, while Manfredi gets jealous at Thompson's blatant flirting with her. Whitney eventually asks Joseph to leave them, and once Thompson is alone with her he reveals that Vernon Masters is planning on using the Gamma cannon on her. In exchange for his help in punishing Masters for his betrayal, Thompson asks for a seat on the Council of Nine.

The team delivers the Gamma cannon to Whitney Frost once Dr. Samberly is finished repairing it. Chief Thompson and Vernon Masters leave with the cannon, but Sousa and Peggy find their car has been sabotaged and won't start. Believing Masters plans to betray Thompson to Whitney Frost, they hurry into the office and asks Samberly for his car. However, Samberly says Thompson told him Sousa wanted the Gamma cannon to become a Gamma bomb, revealing that Thompson plans to take out Whitney Frost, Vernon Masters, and Jason Wilkes in one fell swoop. The three of them hurry to Whitney Frost's lab to stop him. Samberly and Sousa work on a way to deactivate the bomb/cannon while Peggy goes in to apprehend Thompson. She finds Dr. Wilkes still strapped to the table. When she frees him from his bonds, he begs her to leave him, saying he's too dangerous to be around. Peggy refuses to leave him behind, but while on their way out Jason closes a security door to separate them.

Vernon Masters prepares to use the Gamma cannon on Whitney Frost when she abruptly puts an end to the presentation. Thompson reveals his betrayal by pulling a gun on Masters. Vernon begs for Thompson to think about what he's doing and help him take down Whitney Frost, but Thompson leaves him at Whitney's mercy. He attempts to detonate the bomb on his way out of the building, but when the bomb doesn't go off he realizes Peggy Carter is there and interfering with his plan. Thompson finds Sousa and Samberly and demands he reactivate the bomb, but Peggy comes back to the car before he does. Peggy accuses him of wanting to sacrifice innocent lives like Dr. Wilkes' and for not having the courage to bring Vernon Masters to justice, but Thompson says none of the people inside are innocent and by doing this he's making the tough decision none of them have the strength to make. Samberly reactivates the bomb when Thompson pulls a gun on him, but Peggy pulls a gun on Thompson before he can detonate it. Inside the building, Whitney Frost starts to use the Zero Matter on Masters when he realizes Thompson's tricked her into standing in front of the now-reactivated Gamma cannon. Just as Whitney realizes she, too, has been played, a deteriorating Jason Wilkes barges into the room. Before Whitney Frost could stop him, the Zero Matter bursts out of his body.

Like this? Let us know!
Retrieved from "https://marvel.fandom.com/wiki/Marvel%27s_Agent_Carter_Season_2_9?oldid=6498109"
Community content is available under CC-BY-SA unless otherwise noted.