Marvel Database
Register
Don't have an account?
Sign In
Advertisement
in: Episodes, Marvel's Agents of S.H.I.E.L.D. Season 1, 2014, January,
and 45 more

Tahiti. It's a magical place!

A man named Vanchat attempts to move some recovered Chitauri metal to black market operatives, before the arrival of a S.H.I.E.L.D. flashbang brings Ward and May into the meeting, guns blazing, The team remotely leads Vanchat to an elevator that forces him to the roof, wherein Victoria Hand and a cadre of S.H.I.E.L.D. men take him into custody, hoping to use him to “find a friend.”

As Victoria Hand, her men and the team regroup on the plane, revealing in a briefing that Mike Peterson's corpse was supposedly found at the scene of Coulson's abduction, the group is alerted to someone hacking their files: Skye. Skye insists she can find Coulson by tracing Centipede’s money trails, for which Hand grows tired of her insubordination and kicks her off the plane, surprisingly with May’s support. As she’s escorted from the plane however, Skye receives a one-time use phone from Fitz and Simmons, and a heads-up from Ward to ditch her escort detail.

Coulson remembers his time in Tahiti, quickly shaking himself awake to a room with Edison Po, who threatens Coulson with further use of his painful memory-unlocking machine if Coulson doesn't explain the one detail their "Clairvoyant" can’t see: how Coulson came back to life. Elsewhere, Skye repeatedly fails to use public internet access without setting off her S.H.I.E.L.D. bracelet, but gets an idea seeing known Centipede financier Lloyd Rathman in a magazine. Skye follows Rathman to his office, posing as a valet to take his car, and crashing it so that an OnStar representative will send a tow truck to drag the car to Rathman’s home.

Back on the plane, ward relieves a S.H.I.E.L.D. agent interrogating Vanchat, accelerating matters by strapping himself in, and opening a hatch in the plane’s interrogation room until Vanchat gives up his Centipede connections. Meanwhile, Coulson manages to escape his cell for a moment, but finds Po waiting for him outside the building in an abandoned nuclear test town. Finally, Skye impersonates a police officer to call Rathman back to his home for the stolen car, confronting him thereafter in the guise of Melinda May.

Skye manages to bluff her way into forcing Rathman to go through his account records, tracing them back to Raina, and a likely location for her last expenses. Meanwhile, Po continues torturing Coulson for answers, shrugging off Raina's suggestion of a different approach, at least until the Clairvoyant calls and asks to speak to her. Once Raina puts Po back on the phone with the figure, a mysterious sound causes Po to turn blue and drop dead. Back on the plane, Ward questions why May refused to back Skye, before May reveals that Skye does her best work without supervision.

Coulson bristles at Raina's more friendly approach to unlocking Coulson's memories, as she suggests they’re no worse than S.H.I.E.L.D., and only want to unlock the secret that he himself has been searching for, and protected against. Coulson insists that he trusts the system, and whatever reason S.H.I.E.L.D. might have had for keeping things from him, but when Raina triggers his “magical place” response and explains how Coulson’s cellist cried for days after his death, Coulson agrees to use her machine to unlock his memories.

Having been given the location from Skye, Ward and May persuade Victoria Hand to allow them a side mission to retrieve Coulson, while a larger strike team takes out the other Centipede facilities. Skye arrives first to the abandoned town, shortly before Ward runs over a Centipede soldier confronting her, alerting Raina to their presence. While the team fights off the soldiers, Coulson finally sees through his Tahiti memory to find Dr. Streiten disgusted with Nick Fury’s order to keep Coulson alive, and strange chemicals being injected while a spider-like machine operates on his exposed brain. Coulson begs for death both in and out of the memory, while Skye finally knocks Raina out, and May pulls the plug, reviving Coulson.

Later, S.H.I.E.L.D. agents lead Raina away in custody as Coulson bids farewell to Victoria Hand, and thanks Skye for everything she did to help him, even removing her restrictive bracelet. That night, Coulson waits for Dr. Streiten in his car, forcing Streiten to admit that he had in fact been dead for days, while Director Fury did everything in his power to have questionable scientific procedures keep him alive, implanting him with false memories so he’d retain the will to live, and forget the agony of being kept alive so unnaturally for so long. Coulson leaves the doctor be, while elsewhere a badly burned Mike Peterson awakens to find his leg missing, while an implant in his eye tells him to await further instructions. 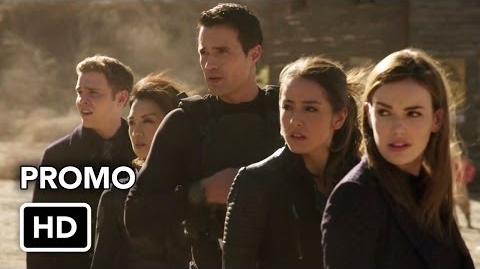