Marvel Database
Register
Don't have an account?
Sign In
Advertisement
in: Episodes, Marvel's Agents of S.H.I.E.L.D. Season 1, 2014, February,
and 35 more

I'm getting into character. My undercover persona harbors some residual resentment to her absent American father.

Agent Coulson lays out that they've managed to gather intelligence Ian Quinn will be transporting a mysterious Cybertek package through a train in the Italian countryside, for which they'll all need to go undercover. On the actual mission, May and Ward secure a room on the train, Ward noting how much more driven Coulson and Skye have seemed of late, before May dons infrared goggles and climbs out the window. Elsewhere, Skye and Fitz pretend to be a couple, swiping the ticket taker's keys to set up their tech in the luggage compartment, while Coulson and Simmons pretend to be father-daughter passengers.

Having thoroughly prepared for her character, Simmons throws a pretend fit with Coulson so as to conveniently throw fake ashes on the security force moving through the train. May follows from above, using her goggles to locate the package in a dining compartment. Soon however, Coulson realizes that communications are down, and travels to the rear car to find it empty, Ward follows shortly thereafter, having been made by the security force, who chase both men off the train and lob a grenade that apparently causes the train to vanish into thin air.

Minutes earlier, Ward dresses as a conductor and prepares to find the package, only to be interrupted by two security agents anticipating his arrival. Ward returns through the car to warn Coulson, jumping off the train once more. As the pair wonder what made the train disappear, the presence of May's goggles alerts them that she too is off the train, before arriving security chase them into a vineyard. Coulson and Ward find a small vehicle already hot-wired, driving it back to the plane to regroup. Coulson warns his Italian police contact Russo, who warns that Cybertek had kill all his men, before he and Ward stumble their way through the holo-table technology to analyze the grenade, debating May's earlier revelation about her relationship with Ward. Coulson tells Ward that fraternization on his Bus is against protocol and if it interferes with the mission, he'll have him transferred to Antarctica, spending the night shift guarding Blonsky's cryo cell. Russo finally shows up to the plane, before May appears from behind and stabs him.

Back to earlier on the train, May followed the path of the package from the rooftop, but soon found herself shot at by enemy agents and forced to deploy her parachute to flee the train. May soon stumbles upon Coulson and Ward stuck in the positions they hit after jumping from the train, apparently paralyzed by the effects of the grenade. May eventually comes across a vehicle and hot-wires it, just before Russo and his men capture her. The men take May to a villa wherein they torture her for Coulson and Ward's location; Russo also admits to taking bribes from Cybertek. But when he stabs her in the shoulder with a knife and turns his back to her, May quickly manages to regain the upper hand and free herself, killing all of Russo's men before pursuing him all the way to the plane, before killing him. Coulson tenderly assists with patching up her wounds, something Ward appears jealous of, before getting word that the train has been found stopped.

Coulson, May and Ward enter the abandoned luggage compartment to finds Simmons just waking up, uncertain what happened to Fitz and Skye. Hours earlier, Skye questions Fitz if an "0-8-4" had ever been found as a person, before the thought is interrupted by arriving agents. Fitz and Skye manage to hold off the attacker long enough for Simmons to arrive and throw herself on the man's grenade, which puts her to sleep like the others. Fitz takes a look at the grenade, noting the technology is similar to their dendro-toxin used in the Night-Night Gun, only this one's gaseous. The train stops, as Fitz and Skye see the package being loaded onto a car, and pursue it all the way to a villa, wherein Ian Quinn soon arrives. Skye tasks Fitz with sabotaging the cars, while she herself enters the house in search of the package.

Down in the basement, Skye finds a hyperbaric chamber that contains Mike Peterson, before Quinn and his men quickly appear, waking Mike from his slumber and attaching a high-tech prosthesis that painfully transforms into a new leg. Mike reluctantly follows Quinn and the Clairvoyant's orders, but insists killing Skye isn't part of his mission. Mike departs, before Quinn decides to kill Skye anyway, shooting her twice in the stomach. Upstairs, Mike brutally attacks the Italian mercenaries who transported the package, given that they led S.H.I.E.L.D. straight to the operation.

Fitz hears the fight commotion just as Coulson and the others arrive, realizing that Skye must be in trouble. Coulson manages to incapacitate Quinn, before finding a bloodied, but still-living Skye in the basement. Thinking quickly, Simmons has Skye placed into the hyperbaric chamber that Mike emerged from, saving Skye's life, though only for the moment. Later aboard the bus, Ward seethes that Coulson allowed Skye to get hurt in the field, while Fitz comforts Simmons for her efforts to prolong Skye's life.

Elsewhere, Mike stands near a busy park and questions his "eye-spy" for permission to see his son, though the device responds "not yet," before we see Mike's cybernetic leg to bear a "Project Deathlok" inscription. 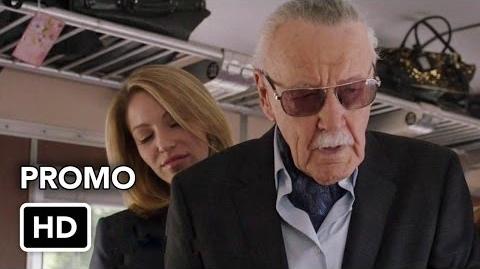