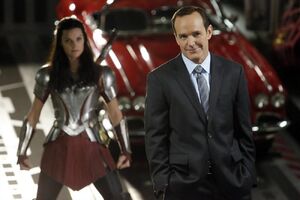 She's a warrior. I saw her fight in New Mexico with Thor - climbed a giant metal killing machine, speared it with her double-bladed sword. It was pretty badass.

Lorelei and Jimmy McKenzie pull up to a gas station in the Nevada desert. While Jimmy goes into the station, Lorelei enchants the Dogs of Hell MC. With the club under her control, Lorelei frees Jimmy from her spell, and presumably kills him.

Back on the Bus, Skye comes to in her hospital bed. Simmons takes a blood sample from her before Agent Ward comes in and updates her on Mike Peterson's status. In the lab, FitzSimmons try to take a sample of the GH.325 drug from her blood. Meanwhile, Coulson unsuccessfully tries to get a clue on Fury's location from Agent Sitwell. The team is then ordered to go out to the Nevada-California border, where S.H.I.E.L.D. has noticed energy signatures similar to the ones Erik Selvig and Jane Foster found in New Mexico. While out there, Lady Sif arrives via the Bifrost. She introduces herself to the agents, and is brought back to the plane. When Coulson walks into the room, Sif becomes alarmed, as she was told by Thor that he died at Loki's hand. He explains that he technically did, but S.H.I.E.L.D. managed to revive him and requests that he be allowed to tell Thor in person. Cutting to the chase, Sif then tells them about Lorelei, and that the only way to stop her is to put an enchanted collar over mouth to prevent her takeover of Midgard.

The team tracks Lorelei's activity to a biker bar in the Nevada desert. The team and Sif head out to the bar, only to face resistance from Nevada State Troopers and bikers under Lorelei's control. They take out Lorelei's forces outside, and send Lady Sif into the bar to take on Lorelei. Ward heads around back, where he faces the Dogs of Hell MC's leader, Rooster. Ward easily overpowers Rooster, but Lorelei comes of the back as Sif faces the bikers inside. She enchants Ward, and the two of them ride away from the scene.

Back on the plane, Sif reveals that the collar was damaged in the fight and its power to silence Lorelei will no longer work. Coulson gives the collar to Fitz to fix it, and orders Simmons to stop looking into the GH.325 drug. Meanwhile, Ward takes Lorelei to Caesars Palace in Las Vegas. They have sex, and in return Ward is to assemble an army for his new queen. S.H.I.E.L.D. soon tracks Lorelei and Ward's location to the hotel, but is already gone by the time a team raids their room. Fitz and Sif head back to the Cage to inspect the collar, but Fitz locks her inside, revealing he is now under Lorelei's spell. Lorelei and Ward are on the Bus, and the plane takes off with Ward piloting. Ward opens up the airlock in the Cage, sending Sif flying out of the plane. May, meanwhile, tries to take on Lorelei herself, but Ward provides a distraction for her to head to the cage and get the Collar and Sif's sword. However, Sif was able to hold onto the plane with her Asgardian strength, and she clawed her way back into the Cage. The two Asgardian women fight in the locked room, ending with Sif putting the collar around Lorelei's neck. Her spell over Ward and Fitz then breaks.

Sif takes Lorelei back to Asgard alive per Odin's orders. With the battle over, but the rest of the team goes back to their daily routine. Ward and May talk about what happened that day in the plane's cockpit. Simmons and Skye look over the black eye Coulson gave Fitz in Skye's hospital room. Coulson comes in and asks for a minute alone with Skye. FitzSimmons leave, and Coulson tells her the truth about the GH.325 drug that brought them back from the brink of death. Skye surprises Coulson by being unphased by the news, and Coulson swears to her that they will find out the truth behind their condition, starting with finding the Clairvoyant. Unbeknownst to them, however, May has been listening in on their conversation through a hidden microphone in Skye's hospital room. She then uses an encrypted line to send the message, "Coulson knows."

This marks Coulson's first encounter with someone directly acquainted with one of the Avengers- outside of Nick Fury and Maria Hill- since his 'death', although he asks Sif not to reveal his survival to Thor, claiming that he wishes to deliver the news to his friend in person.

Odin's orders to Sif to bring Lorelei back alive takes on greater significance for those who have seen the end of Thor: The Dark World, given that it was quite possibly Loki, disguised as Odin, who gave that order, for reasons unknown.

Retrieved from "https://marvel.fandom.com/wiki/Marvel%27s_Agents_of_S.H.I.E.L.D._Season_1_15?oldid=5480998"
Community content is available under CC-BY-SA unless otherwise noted.