Part of the Uprising event
"End of the Beginning" 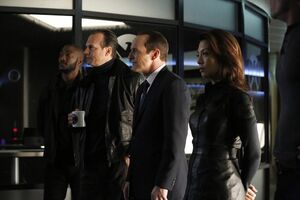 Episode Title
"End of the Beginning"

When that plane touches down, take out everyone on board. Except Agent Coulson...he's mine.

Appearing in "End of the Beginning"

Synopsis for "End of the Beginning"

While on the hunt for the Clairvoyant and Mike Peterson, Agents John Garrett and Antoine Triplett arrive at a S.H.I.E.L.D. safehouse in Sydney, Australia. Garrett informs his subordinate that he believes the Clairvoyant may be one of the thirteen individuals S.H.I.E.L.D. rejected from their gifted individuals index. Suddenly, Peterson - now the cyborg Deathlok - bursts into the safehouse, and Garrett and Triplett hit him with every stun weapon at their disposal, but they barely slow him down. Deathlok then jumps straight through the roof and escapes.

Some time later, the Bus lands on an aircraft carrier, and Agents Hand, Garrett, Triplett, Sitwell, and Blake board the plane. Coulson brings them up to speed on the hunt for the Clairvoyant. They decide that Skye, recently officially made a S.H.I.E.L.D. agent, will divide the agents up into teams of two to investigate individuals suspected of being the Clairvoyant. To prevent the Clairvoyant from reading any one agent's mind to find out they're coming for him, one agent will be told the coordinates of the individual's location, while the other will be told the individual's identity.

Meanwhile, at Deathlok's safehouse, the Clairvoyant informs him via his cyborg eye of a package being left at his door. Deathlok opens it and and painfully attaches the armband to his left arm. At that moment, a targeting HUD comes up on his eye. The Clairvoyant tells him that S.H.I.E.L.D. is coming for them and it's time they meet.

The teams are split up into three groups: Ward and Triplett are sent to the UK to investigate Elijah Fordham, an inmate at Milton Keynes Prison; May and Blake go to Macon, Georgia to find Thomas Nash, a catatonic hospital patient; and Coulson and Garrett head to Muncie, Indiana to investigate Noriko Sato. Hand returns to the Hub coordinate the backup teams and Sitwell is transferred to the Lumerian Star. All teams soon realize that they were expected; Ward and Triplett find the prison ward guard station abandoned; Coulson and Garrett get delayed to their destination by roadblocks; Deathlok appears at Nash's location, and attacks Agent Blake. Blake fires several rounds into his chest but his vest protects him. As the cyborg grabs him by the throat, Blake tries to remind Mike Peterson that he has a son but Deathlok coldly states that man is dead and punctures Blake through the stomach with his robot leg. May arrives on the scene and calls for medical attention as Deathlok fires at her with his new armament.

With Thomas Nash now their prime suspect, Hand has the Bus and the teams regroup at the Hub. May informs the rest of the team that Nash was not in the hospital in Macon. Coulson notices that Blake was able to shoot a tracer onto Deathlok during their fight, leading the team to his location in Pensacola. Deathlok leads them through a chase through a complex, ending with Coulson and Garrett finding Nash in a dark room surrounded by monitors. Nash, using the monitors to talk, reveals himself to be the Clairvoyant as the rest of the team enter the room. Before Nash can be taken into custody, Ward kills him in cold blood after succumbing to his veiled threats against Skye.

Back on the plane, Fitz sets up his encrypted line with Simmons when the transmission starts receiving some interference. Checking around the comm station, he notices that someone has tapped into the Bus' communications, and Simmons - who stayed behind at the Hub when the rest of the team went to Pensacola to use the equipment to analyze Skye's blood - tells him agents are rushing the situation room before being cut off. Meanwhile, Coulson confides in Skye that he believes Thomas Nash was not the real Clairvoyant, but was instead a prop used to get S.H.I.E.L.D. off his trail. Getting suspicious, Skye relays her theory based on the intricate surveillance S.H.I.E.L.D. keeps on its agents that the Clairvoyant isn't a psychic, but a S.H.I.E.L.D. agent with security clearance. That would explain how Raina knew personal information about Coulson because it came from his file or how the Clairvoyant knew Skye was at Quinn's villa because she dropped a tracker. The reason he couldn't know the truth behind Coulson's revival is because Fury never that released that information.

Coulson heads to the Cage to question Ward about his decision to kill Nash, believing him to be working for the real Clairvoyant. Meanwhile, Fitz discovers May's secret line in the plane's cockpit, and warns Skye before proceeding to cut the line before May could give her report to the unknown party at the other end. He then hides as May grabs an I.C.E.R. and starts searching for him. When she reaches the Bus' loading bay, Fitz closes the lab doors behind her before Coulson appears on the upper level, gun drawn. Skye emerges from a side door, gun drawn too. Coulson demands she tell him the truth behind her activities and the Clairvoyant's true identity, guessing the reason why Deathlok spared her and why he fled instead of protecting Nash. Before she can respond, the plane dramatically changes course.

Back at the Hub, Agent Hand, who apparently now has remote control over the plane, orders her agents to kill all aboard the plane once it lands. All except for Coulson.

Meanwhile, in Washington D.C., Nick Fury weaves through traffic pursued by police vehicles with automatic weapons before managing to shake them. Shortly after, a mysterious masked figure takes aim at the vehicle with a bomb that attaches to the underside of the car, flipping Fury clean over.

Retrieved from "https://marvel.fandom.com/wiki/Marvel%27s_Agents_of_S.H.I.E.L.D._Season_1_16?oldid=5284480"
Community content is available under CC-BY-SA unless otherwise noted.