Marvel Database
Register
Don't have an account?
Sign In
Advertisement
in: Episodes, Marvel's Agents of S.H.I.E.L.D. Season 1, 2014, April,
and 64 more

Part of the event(s)

Out of the shadows, into the light. Hydra.

May, still cornered in the Bus' cargobay, reveals to Coulson that her encrypted line wasn't to the Clairvoyant but was directly to Director Fury. She then asks why Fitz was sneaking around in the plane's encrypted lines, making Coulson question if Fitz is the team's traitor to the Clairvoyant. However, Fitz tells them he was only trying to talk to Simmons, who is still at the Hub trying to analyze Skye's blood and figure out how GH.325 works. As Skye tries to get in touch with the Hub, Coulson shoots May with his ICER, and Garrett contacts the Bus in an emergency. He's being fired on from S.H.I.E.L.D. drones, and needs Coulson and his team to get him out of there. Coulson and Fitz drop May in the cage with Ward, and start to shoot down the drones chasing Garret's plane. After the drones are destroyed, Garrett lands his plane in the Bus. Coulson reveals to the rest of his team and Garrett that the identity of the Clairvoyant is Agent Victoria Hand. As Garrett defends Hand from the accusation, Skye decrypts the noise in S.H.I.E.L.D.'s communication systems, revealing a message from Hydra activating its sleeper agents embedded in S.H.I.E.L.D.

Back at the Hub, Agent Hand instructs a group of agents loyal to her to attack Coulson's plane the moment it lands, despite the objections from Agent Shaw. Meanwhile, Simmons and Triplett barricade themselves inside a laboratory after receiving a warning from Agent Weaver at S.H.I.E.L.D. Academy, which is currently besieged by Hydra. Hand and her agents break into the room, and threaten to kill the both of them if they don't swear their loyalty to Hydra. After Trip takes one of her agents hostage, Hand reveals that the situation was just a test, and that she and her loyal agents are still with S.H.I.E.L.D, and that Coulson is the one with Hydra. Though Simmons protests the accusation, Hand states her conclusions; Agent Blake told her his suspicion that Coulson and other Level 8s were involved in a conspiracy, just before becoming critically wounded by Deathlok; recruiting Skye, a member of the Rising Tide, and a known enemy of S.H.I.E.L.D.; failing to report that Akela Amador was alive and that the same backscatter eye implant she had ended up in Deathlok as well; multiple counts of insubordination; and that Coulson killed Dr. Franklin Hall instead of rescuing him.

Meanwhile, the Bus lands at the Hub. Coulson orders May to contact Fury. However, the person at the other end informs her that Fury is dead, shortly before she is shot in the arm once S.H.I.E.L.D. agents attack the plane. Moving deeper into the plane, Coulson pulls the bullet out of her arm before demanding the truth. May confesses that Fury assigned to her to watch for signs of mental or physical deterioration and keep him updated on Coulson's status. When asked if she knew the truth about TAHITI, her silence is as good as confirmation and Coulson feels betrayed. When he reminds her of all they've been through and that he gave her a second chance when he assembled their team, May blurts out that she was the true founder of the team. She explains that Fury knew that Coulson would've recruited her, so she gave Fury the parameters for the team; scientists who could repair Coulson's body and reprogram his brain and a specialist who could help May terminate Coulson if need be. She defends that she only did it to protect him and swears that she has nothing to do with the Clairvoyant or Hydra. However, Coulson declares that he's lost all trust in her.

In the lab, Skye backs up all the technology their team had gathered on a hard drive and wiped the system to keep it from Hydra. When the S.H.I.E.L.D. strike team enters through the cargo ramp, they are caught off guard by an explosive before sweeping the plane. However, Coulson and company escape using a Mousehole to cut a hole in the floor and infiltrate the base armed with ICERs, and split up. Ward and Skye head to the nerve center to disable control of the plane, while the rest of the team makes their way towards Simmons and Triplett. However, Garrett disagrees with Coulson and thinks they should head straight for Agent Hand. While listing the wrongs the Clairvoyant has done to Coulson, Garrett makes a slip of the tongue and lists something Coulson never told anyone, of how Raina was brainwashed by the same mind-probing machine that she used on Coulson. Coulson then puts the pieces together; after Skye was shot, Ian Quinn said it'd be so he'd lead the Clairvoyant to the Guest House, and Garrett had showed up right after. While Coulson interrogates Garrett, a team of S.H.I.E.L.D. agents burst in and hold them at gunpoint. Coulson orders them to arrest Garrett. However, Garrett brings up Agent Sitwell, bringing half of the S.H.I.E.L.D. agents - Hydra sleeper agents - to take out the other half. Garrett joins them, revealing himself as the Clairvoyant.

Held at gunpoint, Coulson deduces that the other deceased members of Garrett's team were killed because they asked the wrong questions. Garrett admits that he was just trying to maintain his secret and reveals that Hydra has infiltrated the highest levels of S.H.I.E.L.D. While not a true believer in Hydra's doctrine, he only joined because he wanted to be on the winning team and offers Coulson a chance to join, to which he flatly refuses. May and Fitz also refuse, the latter promising to make Garrett suffer for what he's done. Garrett orders the Hydra agents to execute Coulson and May but to shoot Fitz in the kneecap, as they need his technical expertise, but the explosion from the bomb Ward and Skye planted provides a distraction for Coulson and May to get the upper hand on them. May easily takes out the Hydra members as Coulson and Garrett fight it out. Just as Garrett is about to kill Coulson, a stun grenade from Fitz knocks him out and gives Coulson the upper hand. Agent Hand comes in with her team and takes Garrett into custody, as she was able to hear everything that went on in there and cleared Coulson of suspicion as a Hydra agent.

As all Hydra agents in the Hub are rounded up, Garrett is among them, as Triplett, enraged to learn that he's a traitor. Coulson and Hand then assess the damage done to S.H.I.E.L.D. Captain America had defeated the hijacked Helicarriers at the Triskelion, but his status is currently unknown. As far as they know, Hydra had taken their East African headquarters and the Treehouse. Although S.H.I.E.L.D. is now disbanded, Hand and her team escort Garrett to the Fridge, where he will presumably be imprisoned for the rest of his life. Agent Ward requests to come along to be the one who personally locks his former S.O. in his cell.

Back on the Bus, Skye, Fitz and Simmons lament the loss of S.H.I.E.L.D. However, Coulson orders his team to affect repairs to the plane, stating that right now, he intends to survive.

While on the plane to Alaska, Hand suggests to Ward that he should kill Garrett instead. Ward agrees and loads his gun, but shoots the two agents guarding Garrett instead before shooting Hand in the stomach. As she bleeds out on the plane's floor, he puts two more in her head, and signs to Garrett that he's with Hydra now.

In the end scene, Ward is sitting down, his eyes closed, while blood flows down Hand's finger, before opening them, revealing the new cold demeanour he wears. 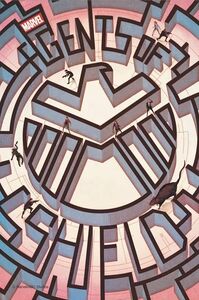