Marvel Database
Register
Don't have an account?
Sign In
Advertisement
in: Episodes, Marvel's Agents of S.H.I.E.L.D. Season 1, 2014, April,
and 53 more

Part of the event(s)

Raina makes origami flowers within her cell, before an audible incursion brings Ward to her door, with the gift of a new flower dress from the Clairvoyant. Ward takes Raina to a barber shop in Cuba, introducing her to the real Clairvoyant, John Garrett, before he explains the deception of his abilities, and activates a lever that takes her to a secret chamber downstairs. Meanwhile, Coulson and Skye assess the remaining uncompromised S.H.I.E.L.D. bases, currently standing at a bleak three.

While Fitz and Simmons attempt to repair the damage to the plane, Coulson learns of another S.H.I.E.L.D. base recovered, just before Air Force Major Glenn Talbot makes contact, announcing his intent to send a peacekeeping force to moderate the surviving S.H.I.E.L.D. staff. Coulson realizes from Talbot’s reputation that the Major will likely keep them all in captivity, tasking Skye to enact the “Odyssey” protocol as they prepare the jet for takeoff.

Reluctantly allowing Triplett to fly with them at Simmons’ behest, Coulson is confronted by bad news and worsening updates on their situation at every turn. Skye scrubs any record of their identities from the internet, including from S.H.I.E.L.D. databases, before calling Ward to check in. Ward fakes that Hand has them taking the long way to the Fridge, after which Garrett chides him for holding up the “Agent Ward” cover for so long. Ward protests that Shooting Skye hadn’t always been part of their plan, but Garrett counters that she’d been onto Centipede long before S.H.I.E.L.D. recruited her. Changing direction, Garrett shows Raina to her new assignment, investigating any drugs he could salvage from the G.H. base, while he and Ward lead a team to raid the Fridge.

Coulson places the team’s badges in safe keeping, before noting that his own badge has begun to glow with a set of coordinates, undoubtedly from Nick Fury himself. Coulson updates the skeptical team, though they remain unconvinced by his pleas. May asks Coulson for his weapon, given that his resurrection might have included subliminal Hydra instructions, as Nick Fury assigned control of the project to an unknown second party. Meanwhile, Ward explains to Raina how he managed to blend in with the S.H.I.E.L.D. team, Coulson included, though his true allegiance remains to Garrett.

Ward leads Garrett to the top floor of the Fridge, though the guards deny him entry without the explicit presence of Victoria Hand. A staged chopper attack from Hydra forces the guards to allow them inside, after which Ward quickly disposes of the men. Downstairs, Garrett reveals that the “slingshot” method for disposing of dangerous technologies is itself a ruse, and Fury keeps a vault of 0-8-4s within the base. Activating the Hydra weapon recovered in Peru, Garrett sets free a number of S.H.I.E.L.D. prisoners, among them Marcus Daniels, while Ward examines the Berserker staff. Finally, Ward uses the weapon to uncover a secret storage locker beneath the floors, containing an item that Garrett marvels at.

Coulson and his team arrive to a snowy wilderness to track down the coordinates, during which Fitz and Simmons remain uneasy both in trust for Coulson, and Simmons’ continued affection for Triplett. Upon finding the empty coordinates, Coulson pleads with the team that Fury must still be alive, and that their status as S.H.I.E.L.D. agents fighting Hydra must still carry wait, before a toss of his badge activates a nearby gun turret. Coulson steps out to identify himself, after which a nearby rock opens to reveal an entrance to a base. Meanwhile, Ward and the others find that Skye’s logs of the team’s work on the alien serum has been encoded, for which he’ll need to go back undercover.

Agent Eric Koenig steps out to greet Coulson and his team into the “Providence” base, admitting that Nick Fury is indeed dead, while Skye calls Ward to update him on the situation. Koenig pulls Coulson aside in private to explain that he can’t trust anyone outside of Coulson, per the still-living Nick Fury’s orders, something only a select few know, as part of “Eclipse Protocol.” Meanwhile, Garrett (bearing some apparent cybernetic enhancements of his own) instructs Ward on his mission to get the password from Skye, hitting the agent multiple times to sell his cover story. While Ward arrives at the Providence base to find Skye waiting, Garrett and Raina welcome a bitter Quinn back into their operation. Quinn protests his being kept in the dark, before Garrett presents a gift: Quinn’s confiscated Gravitonium. 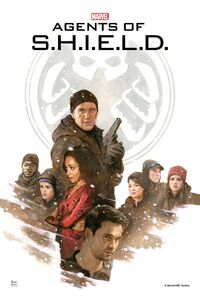