Part of the Uprising event.
"Ragtag" 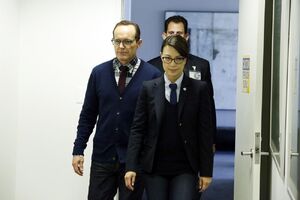 Watch out, Hydra. Here we come.

John Garrett visits a young Grant Ward, who is doing time at a Juvenile Detention Facility in Plymouth, Massachusetts for going AWOL from the military academy he was sent to, stealing a car for transportation, and burning down his family home with his brother Maynard still in it. Garrett states to Ward that his parents are pressing charges while Maynard is trying to get the court to have Ward tried as an adult. Garrett offers to break Ward out of the facility if he joins him and the secretive organization he is a part of. Although Ward is at first skeptical of Garrett's offer, he eventually agrees, and a team breaks in to get them out.

Some time later, Garrett takes Ward hunting in the Wyoming wilderness. Garrett gives his new recruit a lesson on self-sufficiency before leaving him out there alone with no one but his dog Buddy. Garrett eventually comes back some months later, but Ward puts his shotgun against Garrett's neck. He wins back Ward's trust, but then pulls a gun on him for his next training.

Five years later, Garrett tells Ward about Hydra. As they get ready to leave, Garrett has Ward finish his training by killing the dog. Ward shoots into the air to make Garrett think he shot the dog while really letting it get away, but Garrett finishes it off from afar.

Fitz, Simmons, and Skye are watching a news report on the assassination of a Colombian drug lord carried out by Deathlok from their hotel room in Los Angeles. Coulson calls them into his room, and gives the team their mission: Plant a flash drive in one of Cybertek's (the company that turned Mike Peterson into Deathlok) computers that will activate a Trojan Horse virus Skye left in the hard drive Garrett wanted her to decrypt. Trip arrives back at the hotel with a suitcase full of his grandfather's memorabilia from his time as a Howling Commando, which the team will use to break into Cybertek's corporate headquarters in Palo Alto.

Back on the Bus, Garrett congratulates Deathlok on his successful assassination on a South American drug lord with and rewards him by having footage of his son streamed to him. Meanwhile, Raina informs him that her scientists have almost finished replicating the drug that healed Skye and brought Coulson back to life.

Coulson and May meanwhile go undercover at Cybertek as former S.H.I.E.L.D. scientists seeking employment there. May is wearing a pin that allows Skye to get into Cybertek's computers, but when that fails, she tells them to make their way to the building's fourth floor. They get up there, taking out a few Cybertek employees on the way, only to find that all of Cybertek's files are kept on hard copies. They find Cybertek's files on Project Deathlok, and discover that the project dates all the way back to 1990, and that the project's first test subject was none other than John Garrett. They then toss the cabinet containing the Deathlok files out the window for FitzSimmons to retrieve, before Trip then helps them out of the building with a zipline.

Meanwhile, Ward confronts Garrett about the time he left him alone in Wyoming as Garrett starts to collapse. Ward rushes him to the plane's medical bay and stabilizes his biomechanical implants. Garrett confesses to Ward that his organs are failing, and Cybertek's doctors only gives him a month or two left to live. He doesn't only want the GH.325 drug for his soldiers, but for himself in hopes that it will cure his condition.

Coulson's team meanwhile talks over their discovery at Cybertek. Fitz is still in denial about Ward's betrayal, enraging Skye, who blames Ward's betrayal on herself, to the point that she walks off and sulks in her hotel room. May goes in after her, and tries to console her. May swears they will track Ward down before Coulson barges in and lets them know they've tracked Cybertek's shipments to Havana, Cuba.

Ian Quinn, the "new face" of Hydra's enterprise, welcomes Garrett and Ward back to their base in Cuba. Ward heads down into the base while Garrett stays above ground to get a haircut. Meanwhile, Raina tells Ward a story about Skye's origin in China. Apparently, two monsters tore apart villages in the Hunan Province looking for their baby, which grew up to be Skye.

Coulson's team has arrived in Cuba. Coulson, May, Skye, and Trip are staking out the barbershop that is a front for Garrett's base, while FitzSimmons scope the Bus. Ward, however, catches them off guard and takes them back to the plane. Once aboard, Garrett confronts them, but Ward accidentally activates an EMP on Fitz disguised as a toy buzzer. The EMP shorts out the robotics in Garrett's body, hastening his condition. He has FitzSimmons taken away while Ward and Raina look over him. Realizing he's near his end, Garrett orders Ward to kill Fitz and Simmons for him. He then has Raina open up his robotics, revealing the Centipede serum that's been keeping him alive. Ward, meanwhile, has cornered FitzSimmons, who lock themselves in the plane's airlock. After refusing the open the door to let him in, Ward dumps the air lock into the Caribbean Sea. Ward makes his way back to Garrett soon after Raina injected the recreated GH.325 into the Centipede serum. Garrett starts convulsing before calming down, now claiming to experience "the universe." At the barber shop, meanwhile, Coulson's team is cornered by a team of Hydra agents, three who are Centipede soldiers and one of which is carrying the Berserker staff.

In the final scene, Ian Quinn is in Washington talking to two leaders of the US Military, offering to sell them a thousand super soldiers just like Deathlok while mentioning that the South American drug lord's assassination was part of the Deathlok promotion.

Like this? Let us know!
Retrieved from "https://marvel.fandom.com/wiki/Marvel%27s_Agents_of_S.H.I.E.L.D._Season_1_21?oldid=6498124"
Community content is available under CC-BY-SA unless otherwise noted.