Part of the Uprising event
"Beginning of the End" 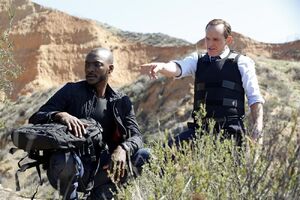 Episode Title
"Beginning of the End"

Backup isn't coming. It will be just the four of us. We'll be outmanned and outgunned, but Fury always said a man can accomplish anything when he realizes he's part of something bigger. A team of people can share that conviction can change the world. So what do you say? You ready to change the world?

Appearing in "Beginning of the End"

Synopsis for "Beginning of the End"

Kyle Zeller introduces a new employee to his job at Cybertek systems, showing him their control over the team of soldiers ready to take on Coulson’s team. Back in the barbershop, the team just barely manages to gain the upper hand in particular May with the Berserker staff, as Skye retrieves the data and May brings the structure down on the soldiers.

Garret learns of the setback over the phone, but ignores it, feeling stronger and more alert than ever, ripping a door off the hinge to scratch out some of the information now surging through his brain. Quinn laments that they'll need more of the super-soldier serum to display to their buyers, as Ward questions Garrett if they really intend to follow Hydra, now that they have all they wanted. An enthusiastic Garrett urges Ward to focus on what he wants now, as we see him having scratched out the alien equation from earlier in the season.

Coulson and the team learn that Fitz and Simmons have apparently gone missing, before briefing one another on route to their impending assault of the Cybertek facility. Meanwhile, Fitz and Simmons actually survived the capsule’s fall from the plane, even if it has since sunk to the bottom of the ocean. Having broken his arm in the commotion, Fitz informs Simmons that he can’t feasibly see a way they’d escape the capsule, or signal anyone who might respond, likely leading to their deaths.

Ward urges Raina to keep an eye on Garrett, as Garrett observes the gravitonium and espouses that he can see both its purpose and the true origins of all life. Raina admits that she was disappointed at first to learn that Garrett wasn't actually clairvoyant; having had a question to ask him, but Garrett now believes the truth to be behind his eyes. Encouraged, Raina ask what she’ll become in the new evolution they believe imminent. Meanwhile, Fitz and Simmons wonder aloud what death will be like; before Simmons realizes that the window pane’s unique chemistry would allow them to craft a home made explosive, and thus a slight chance of escaping the sunken capsule.

While Ian Quinn shows several military generals around Cybertek's new base in hope of funding, Coulson and Triplett manage to commandeer an armored truck from outside, providing enough of a distraction to allow May and Skye to enter the base. The generals all demand an explanation of the gunfire, for which Garrett, Deathlok and Ward arrive, though Garret insists that the generals are a remnant of the old world, ripping out a rib from one of the men and stabbing him to death with it.

While Raina and Quinn prepare to leave with the gravitonium, Ward protests that Garrett has clearly lost his mind, even as Raina insists he’s seeing clearly for the first time. Raina points out that both Ward and Garrett want exactly the same thing: Skye, the key to whatever evolutionary change they want the world to undergo. Ward doubts her words, believing he had no chance with Skye, but Raina points out that the two could both be monsters together after the plan comes to fruition. Meanwhile, Skye and May enter the Cybertek control room, claiming to have a bomb and take director Zeller hostage, the intended effect of which gives the super-soldiers new orders to abandon Coulson and protect Garrett. Coulson then exits the vehicle, intending to follow the soldiers to Garrett and instructs Triplett to get out and contact armed forces.

Ward comes to Garrett, informing him that the compound is under attack and asks for orders. Garrett cryptically claims he had already done so but Ward insists that he regain his senses. Garrett then gets a call, assuming that it's Zeller, only to hear Skye on the other end, taunting that she's taken control of the soldiers' control center. Garrett informs her that unless anyone but the assigned handler gives an order to his men then the soldiers' explosive eye would go off. Skye pretends to be dumbfounded as May ushers all the handlers out of the room. Garrett then has the last laugh, claiming that Fitz and Simmons are dead, prompting Skye to toss away the phone in frustration. Garrett then orders Ward to bring Skye to him, having been told by Raina how "special" she is.

Fitz and Simmons prepare to activate the charge on the window, as Fitz hands over a breather with just enough air to allow her a chance to make it to the surface. Fitz laments that he never had the courage to tell her how he felt, but pleads with her to let him show it by sacrificing his life for hers, just before blowing the window. Simmons successfully manages to swim to the surface, dragging an unconscious Fitz with her, when above the water a hand reaches out to help her: none other than Nick Fury himself. A short while later, Fury explains that he and his remaining men had tracked the beacon the two had sent out earlier, as well that while Fitz managed to survive, his condition remains somewhat critical for the moment. He then asks if she knows where Coulson is, as he was looking for him.

Back in the Cybertek control center, Skye has the bomb strapped around Zeller's chest. While he assumes she wants control of the soldiers, she demands to know why he serves Hydra, asking if he's devoted to the cause, that Hydra provides a sense of family or because of their “Incentives Program”; she gets a reaction on the third one. Then suddenly Ward confronts Skye, calling her bluff, pointing out that she didn’t even have the wherewithal to kill him. Skye expresses pity for him for betraying their team, stating that Fitz is a hero because he wanted to believe there was good in Ward and remarks that some people are just born evil. Ward concurs and insinuates that the two of them are not so different; Skye corrects that Garrett is the evil one; him, she labels to be weak for being so willing to blindly follow orders. Ward admits that she woke up a certain weakness in him, but Skye soon plays her hand, that she only meant to distract long enough for the spurned May to begin her attack. Meanwhile, Coulson confronts Garrett and lands the first punch, though Garrett easily overpowers him and sends Coulson flying behind some canisters, right into the path of a waiting Nick Fury. Coulson tables their need for a conversation about his resurrection, as Fury hands over a weapon to even the odds: the Destroyer weapon from ‘The Avengers,’ which makes short work of Garrett and his men, before losing power.

While Skye attempts to work out what Garrett has over the Cybertek director, Fury and Coulson marvel at how off the deep end Garrett seems to have gone, with all his rhetoric about being “a part of something bigger”, as Garrett had misheard it to be “become something bigger”. Meanwhile, May gains the upper hand in her fight with Ward by nailing his foot to the floor, and striking him in the throat before finally knocking the agent out. Skye enters a Cybertek holding facility with the director and leads him to his captive wife, opening another cell to find Mike’s son, Ace. She then reveals to Zeller that the “bomb” is in fact an Incredible Hulk action figure, to his embarrassment. Having hacked into Mike/Deathlok's ocular implant, Skye has Ace deliver a message to his father that confirms the boy’s safety, leading Mike to finally turn on Garrett. Blasted in the chest with a micro-missile, Garrett remains near death, for which Coulson and Fury encourage Mike to finish the job, which he does by slamming down his cyborg leg.

As the U.S. military rounds up, the Centipede soldiers, Coulson remarks that without regular injections, their superstrength will fade and doctors are going to remove their ocular implants. He then confronts a captive Ward and updates him that both Fitz and Simmons survived, while Coulson and May intend to see to it personally that Ward spends the rest of his life feeling the weight of his actions. Outside, Mike watches his son led to safety from a distance, leading Skye to assure that Ace would accept his father no matter what. Instead, Mike wants only to make amends for his actions as Deathlok, and walks off into the night to begin making things right for the sake of his son. Meanwhile, Garrett resurrects in the Cybertek facility and activates a machine that outfits him with even more cybernetics of nightmarish proportion, though while he gloats of his survival and indestructibility, Coulson reappears and disintegrates Garrett with the recovered 0-8-4 weapon.

Back on the Bus, Fury defends his dangerous resurrection of Coulson in that May would be monitoring his mental state, while Coulson's official status as an Avenger justified the decision to return him to life. Fury explains that S.H.I.E.L.D. was at least founded on a pure ideal of protection, turning over a “tool box” cube with which Coulson can begin to rebuild the organization as its new director. With that, Fury departs to head underground for the time being, dipping his shades and reminding Coulson that he’ll be “everywhere.”

Coulson and the team greet Simmons at their new base location dictated by the cube; learning of Fitz's survival, before an identical twin of Eric Koenig named “Billy Koenig” introduces him and the “Playground” facility. He expresses the same enthusiasm as his brother at meeting Coulson. He promises to provide him his lanyard but tells the others that they'll get one on a case-by-case basis, as Hydra is still out there causing trouble.

Meanwhile, Raina enters a guarded cell at mysterious location and consults with an unidentified figure. Turning over a photo of Skye, Raina tells the figure that she found his daughter, as we see the man’s oozing hand grasp the image.

That night, Coulson finds himself with trouble sleeping, before venturing into base storage and finding the equation Garrett carved out earlier. Seemingly in a daze, Coulson carves out an even larger equation on one of the walls.

Retrieved from "https://marvel.fandom.com/wiki/Marvel%27s_Agents_of_S.H.I.E.L.D._Season_1_22?oldid=5505926"
Community content is available under CC-BY-SA unless otherwise noted.