Marvel Database
Register
Don't have an account?
Sign In
Advertisement
in: Episodes, Marvel's Agents of S.H.I.E.L.D. Season 1, 2013, October,
and 47 more

We have to live with the choices we make, but sometimes we have to die with them too.

Out on a country road, a S.H.I.E.L.D. trucker named Mack drives his sensitive cargo flanked by two SUVs, giving the all-clear to headquarters, when suddenly the lead SUV flies upward through the air, crashing back to the ground. Mack radios for help before the follow up car is similarly dispatched, and the truck’s cab itself is violently lifted off the road. Moments later, a group of armed men break into the trailer, cracking open a S.H.I.E.L.D. vault to reveal dapper scientist Dr. Franklin Hall, who seems to have been expecting them. Back on the newly-restored “bus,” Skye grumbles about having to strength train with Agent Ward, even as the agent insists that all trainees will experience a defining moment that shapes them as an agent. Skye presses Ward for his, threatening to inject him with truth serum again, though Ward reveals they never had any, and that he faked his previous “confession.”. Upstairs, Coulson informs the team that protected asset Dr. Hall has gone missing, distressing Fitz and Simmons for their familiarity with the man, and the apparent “invisible” attackers that crippled the convoy.

At the site of the crash, Mack explains that someone from within must have alerted the enemy to Hall’s location, while Simmons finds an apparent gravity distortion that throws around several ambient rocks, and leaves behind a small device. Later, Coulson and Ward track down the man who sold the armed crew his equipment to raid the truck, tracing his payment back to wealthy mining philanthropist Ian Quinn, whose Maltese diplomatic immunity prevents S.H.I.E.L.D. from reaching him.

In Malta, Quinn shows his former partner Dr. Hall the miniaturized gravity device secured through his vast fortune, which Fitz and Simmons investigate on their own to find manipulates the rare substance “gravitonium.” Quinn explains to Hall that he liberated him to continue Hall’s life’s work with a full-scale version of the device, something Hall seems eager to continue. Meanwhile, Coulson briefs the others that a high-security laser fence prevents anyone from infiltrating the facility, to which Skye offers to attend an upcoming function with a hacked invite.

Ward discusses with Coulson his reluctance to allow Skye on her own mission without training, to which Coulson suggests she might progress more if he treated her as a person, rather than an operative. Ward attempts to teach Skye to take an enemy’s gun, revealing that his own “defining moment” came from training rigorously to defend his family from his violent older brother. Fitz and Simmons provide Skye with a compact mirror that will allow wireless access within the compound to disable the surrounding fence, getting Ward and Coulson in to extract Dr. Hall. With May, and with Fitz and Simmons piping intel through an earpiece, Skye enters the party and makes her way to find Ian Quinn, who quickly reveals that he allowed her access to the party in order to recruit her impressive talents as a member of the Rising Tide. Quinn next gives a speech announcing to dignitaries that his new invention will allow them to circumvent governments and S.H.I.E.L.D. alike, during which Skye slips away to find Quinn’s office. Quinn catches her in the act however, for which she silently writes on a pad that S.H.I.E.L.D. is listening, and suggests they find somewhere to talk.

Ditching her earpiece, Skye explains to Quinn how she managed to infiltrate S.H.I.E.L.D., as Quinn corroborates that they tend to prey on those with records, providing a false sense of family in recruitment. Meanwhile, Ward and Coulson arrive on the beach, stationing them outside the fence and taking down the surrounding guards. Skye finally activates the mirror, enabling Fitz to remotely disable the fence and allow Coulson and Ward access, though Coulson curiously fumbles with his gun in the ensuing firefight. Quinn is quickly alerted to the security breach, as Coulson enters Dr. Franklin’s lab, only to find the man has no intention of leaving. Hall explains that he purposefully leaked information about his whereabouts to have Quinn bring him to the device, hoping to destroy it to keep out of the hands of either Quinn, or S.H.I.E.L.D. The gravity of the room quickly goes haywire, as Coulson pleads with Hall not to kill all those in the compound by overloading the machine. Upstairs, Quinn holds a gun to Skye, though she quickly manages to snatch it away, and flees out the window rather than pull the trigger.

Having landed in the pool, Skye attempts to leave the party as Ward comes to her rescue to fight Ian Quinn's men while Ian Quinn and his right-hand man escape to their helicopter. While downstairs, Coulson struggles to find a way to shut off the gravity device. Hall pleads that he must live with his choice in order to protect millions more from being hurt by the technology, before Coulson destroys the window surrounding the device, the gravity of which pulls Hall into the chemical reaction, envelops him, and ultimately powers down the device. After Coulson orders the remaining gravitonium matter sealed away in an unmarked S.H.I.E.L.D. vault, May expresses her desire to return to combat, rather than allow a rusty Coulson to put himself in danger again. Back on the plane, Ward observes Skye training on her own, before listening to her backstory of being rejected from foster homes at a young age, and wanting to belong to something like S.H.I.E.L.D. In the final scene taking place deep in the S.H.I.E.L.D. vault, the hand of Dr. Hall appears to reach out from the sealed gravitonium, before sinking back into the matter. 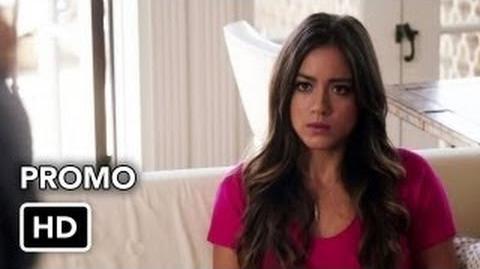